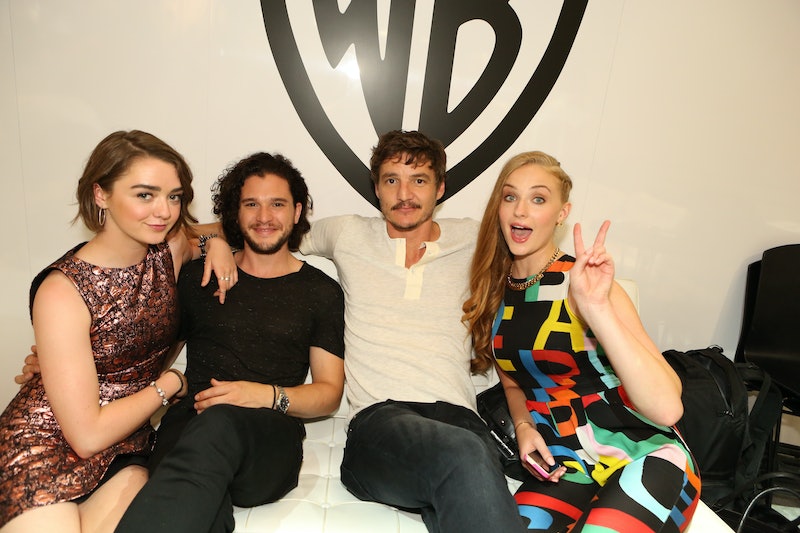 I'll try my best not to make this news sound like the set-up for a Game of Thrones joke, but the facts are working against me. Jon Snow, Arya Stark, and Sansa Stark went to a rave this weekend. This actually happened and you missed it. That is, unless you had the magnificent privilege of being there, and in that case: please send pictures NOW.

On Friday, Irish DJ Annie Mac posted a picture to her Instagram with Kit Harington and Maisie Williams in a DJ booth at a big ol' dance party. She captioned the pic, "Jon Snow, Arya And Sansa Stark came to rave in Belfast last night. #gameofthrones," indicating that Sophie Turner, who wasn't in the picture, was present. My best guess is that she was either taking the picture or in the bathroom. In any case, all of you Stark fans will be glad to see the first daughters of Winterfell and the dreamiest bastard in all the land finally reunited. The only one missing from this rendezvous was Bran. I'm guessing that house music makes Hodor go a little mental.

Without further ado, here they are in all their glory. Winter is coming, and this is your cue to drop the bass. Let all of the seven kingdoms hear it!

For your consideration, here's Williams' video from inside the warehouse walls.

This is the part where I carry out this punchline and imagine this scenario playing out with Harington, Williams, and Turner's characters. Let's imagine how these Stark children would look at a rave.

Arya would incorporate her swordplay moves, because what else was dance training for??

Sansa would do her hair in some elaborate way...

Only for it to be soiled by movement and sweat.

Jon Snow would strut for a while, in the midst of an MDMA high...

But let's face it. His crash would be super intense and moody.

Inevitably, a trap-music remix of "The Rains of Castamere" would start playing, and we all know that means somebody's getting stabbed or poisoned. But with the Stark children reunited, I'm guessing they could eke out a plan to escape and avoid this.

And they all lived happily ever after!