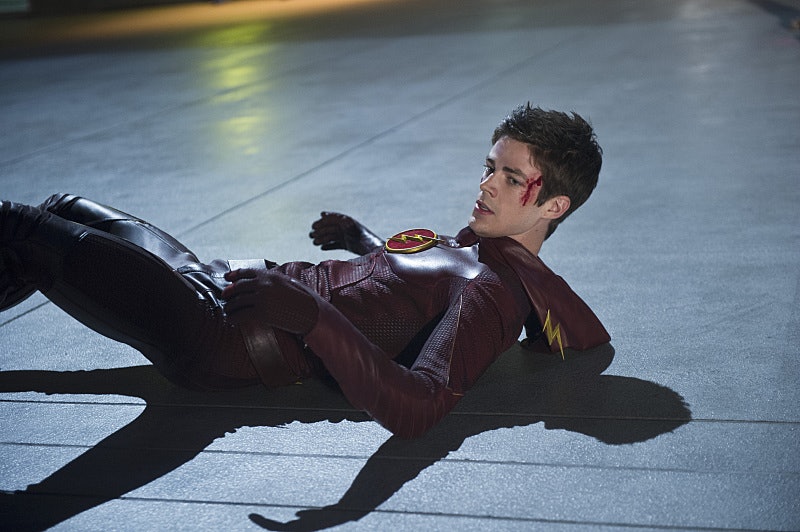 To fans of The Flash comics, the title of the Dec. 10 episode of The Flash , "The Man in the Yellow Suit," can only mean one thing — Reverse-Flash is coming to Central City. Reverse-Flash may sound like an idea made up for , but that's not the case at all. Reverse-Flash comes directly from DC Comics. He's the Lex Luthor to Flash's Superman — the man who never stops scheming to destroy the costumed hero out of a twisted desire to supplant him. Reverse-Flash is also responsible for the death of Barry Allen's mother, which will no doubt play into The Flash's midseason finale.

Reverse-Flash is Barry's biggest arch-enemy, the super villain who's Flash's exact match, but also his complete opposite. Depending on what crook is behind the yellow and black mask, Reverse-Flash is also known as Professor Zoom, Dr. Zoom, and occasionally just Zoom. His costume even looks like an inverse Flash outfit, with the same skintight suit and lightning bolt insignia, just in yellow. It encapsulates just how well matched the opponents are. But much like The Flash, there's more than one version of Reverse-Flash.

Barry Allen's version of the nemesis is Eobard Thawne, who's basically Barry's biggest stan. Thawne is a twenty-fifth century fan of Flash who admires him so much that he tries to turn himself into the Flash, even exposing himself to chemicals so he can gain super-speed. But in his quest to absorb super speed and become a hero, everything good about Barry Allen becomes twisted into evil in Thawne's damaged mind.

And as he becomes crazier, he becomes more obsessed with Barry Allen, and as his obsession grows, he eventually decides to travel back in time to the twentieth century with the goal of becoming Barry's friend and colleague. Of course, things don't go that well once he arrives, and the crimes he's committed and his break from reality make him Barry's enemy instead.

The CW series has already introduced a character named Eddie Thawne. If The Flash is planning to follow comics continuity, he should be the one to become Dr. Zoom or Reverse Flash, but he should also be from the future, not a twenty-first century police detective. So they could add a whole new character instead. Or they could say that the current Eddie is Eobard's ancestor and have actor Rick Cosnett also play Reverse-Flash when he comes from the future. Regardless of who becomes Reverse-Flash, Barry will undoubtedly be challenged by facing his biggest enemy just months after harnessing his powers.