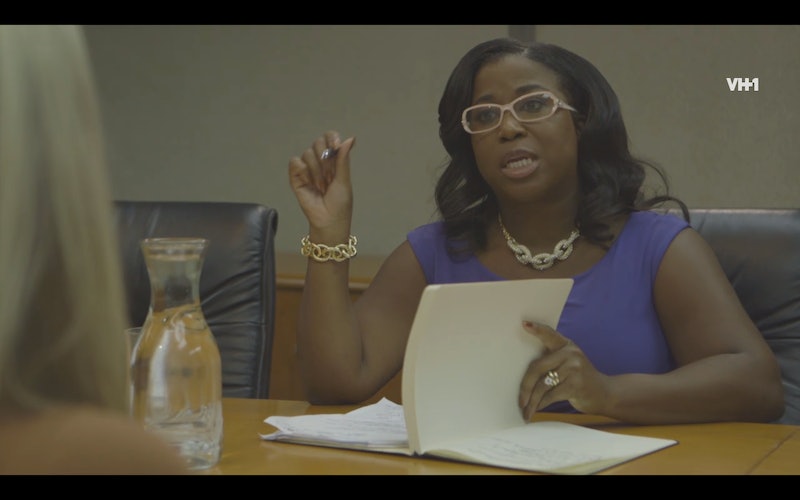 Following in the wake of shows like Iyanla, Fix My Life, VH1 has decided to get into the game of advice giving. But rather than the soft-lensed, gentle encouragement of the OWN show, Bye Felicia!, hosted by Deborah Hawkes and Missy Young, is more of a comedy of errors… where the errors all come from the woefully oblivious white girls who are asking for their help. And that's a part of the show, apparently… I guess VH1 thinks that the racial contrast between the black hosts and the white subjects adds something to it, whereas I'm not totally sure why they wouldn't find women of every color for Hawkes and Young to help in order to offset any accidental association with the disastrous Girlfriend Intervention and its protracted run on Lifetime.

Hawkes' business, "My Atlanta Life Coach," is a place where Atlantans can go to get advice on how to improve their life, teaches them how to be a better boss, or even talk to their entire church group. And if you live outside of Atlanta, she'll give you the same services over the phone or on the computer (very Web Therapy). She also runs a company that focuses on planning weddings, one that focuses on businesses, and a holding company, Hawkes Transition LLC. She's got as much of a head for business as she does helping people get their lives together.

And Hawkes leaves it alllll on camera. She's the one who will call someone out for their craziness, and her facial expressions always betray exactly what she's thinking. She doesn't parse her words, so her clients had better be prepared to hear the whole truth and nothing but. She'll be a useful avatar for the audience's incredulousness when watching the human train wrecks of Bye Felicia!

More like this
15 Piping Hot Behind-The-Scenes Secrets From 'Great British Bake Off'
By Emily Dixon and Darshita Goyal
What’s New On Netflix: Ana De Armas’ 'Blonde' & A Nick Kroll Special
By Arya Roshanian
Here’s What Went Down Between Genevieve & Aaron Before 'Bachelor In Paradise'
By Grace Wehniainen
Devon Diep From 'Bling Empire' Wrote A Song About Her “Second Chance At Love”
By Grace Wehniainen
Get Even More From Bustle — Sign Up For The Newsletter