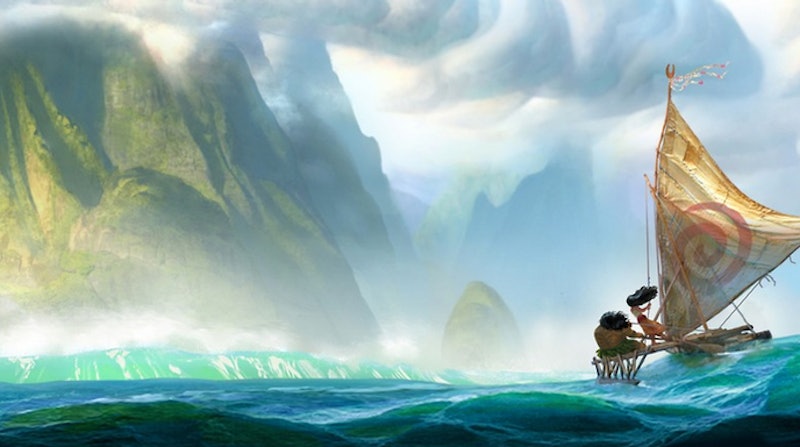 Set for a 2016 release, the next big movie in the works from Disney is Moana , the story of a "young woman [who] uses her navigational talents to set sail for a fabled island" alongside the demigod Maui." So what stories is Moana based on, and what can we expect from this movie when it hits theaters next year?

Moana is being directed by Ron Clements and Jon Muster, who you may know from such genuine classics as Aladdin and The Little Mermaid, as well as underrated gems like The Great Mouse Detective, The Black Cauldron, and The Princess and the Frog. Clements and Muster are also writing it, alongside Eagle Vs. Shark writer Taika Waititi. The story will take place in ancient Oceania, and as Bustle's own Kadeen Griffiths mentioned previously, she'll be the first Polynesian princess in the Disney repertoire. So what mythos, or legends, or true stories is Moana's story based on? As Cinemablend's Kristy Puchko notes:

If Maui's name is a hint, then Moana could well be based on the true story of how Polynesians were believed to have made it to Oceania's islands to begin with. In 1947, explorer Thor Heyerdahl posited that tribes from South America built simple rafts that they sailed more than 4,000 miles across the open Pacific Ocean to reach Polynesia. To prove his theory, he set out on a voyage that he aimed to be as in line with theirs as possible. The trials and triumphs of his successful expedition were recently chronicled on the heralded live-action film, Kon Tiki.

One of the main things we actually know about Moana as a character at this point is that she's a skilled navigator, and that she uses that skill to set off on a quest for a fabled island. We have no confirmation that this origin tale is what Disney's pulling from, but we know they're pulling from something. Do they ever not? Moana most likely won't be the straightforward adaptation of any one story — it'll likely follow in the footsteps of Disney's other notable films and mash together bits from different cultural touchstones, different eras, different character devices, adding in a lot of fiction along the way. Pocahontas was based on a true story, after all, but that hardly means it was historically accurate or even culturally accurate. Hercules was based off of well-trafficked myths, but it hardly remained accurate to those myths. Frozen, even, was initially based off The Snow Queen, but it's hardly possible to argue it remained at all comparable save for the presence of ice-powers.

Moana, like most Disney features, will likely end up a mish-mash. Here's to hoping it's an educational and honorable one.

More like this
Is 'The Woman King' Based On A True Story? The Female Agojie Warriors Did Exist
By Radhika Menon
Harry Potter's Viktor Krum Has Undergone A Huge Transformation Since Hogwarts
By Sam Ramsden and Meguire Hennes
Kyle & Deepti Finally Revealed Their Relationship Status Post-'After The Altar'
By Grace Wehniainen
All The Clues About Gabby & Erich's Relationship After 'The Bachelorette' Finale
By Kadin Burnett
Get Even More From Bustle — Sign Up For The Newsletter