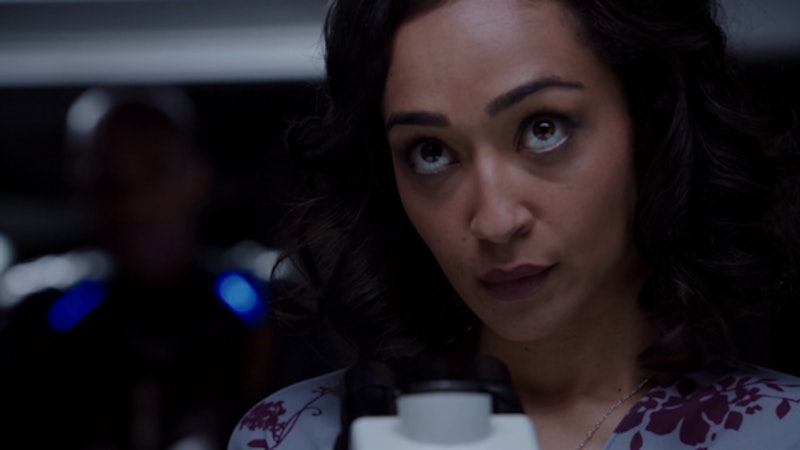 Fans are prepared for a game-changing cliffhanger as ABC's Agents of S.H.I.E.L.D. arrives at its midseason finale this Tuesday. Season 2 of the comic book spinoff has been building to a major revelation involving Skye, her father, the Diviner, the "temple," and that blue-skinned alien we now know is a Kree. And if the reviews are any indication, the episode, "What We Become," will not disappoint. Forbes calls it "the best episode of the series to date," ComicBook.com claims the hour is "a thriller from the word 'go,'" io9 simply states that the finale will "blow your goddamn mind."

The mystery that most fans can't wait to see answered revolves around Skye and her alien heritage. Just what the heck is the hacker/S.H.I.E.L.D. agent? Theories on the subject are as numerous as heads of the mythological Hydra. Skye is an Inhuman and the "temple" is in Attilan. No wait, she's Mantis, and the "temple" is the home of the Priests of Pama. Or maybe she's actually Daisy Johnson, aka Quake, and her dad is the evil Doctor Zabo.

But Skye isn't the only character on S.H.I.E.L.D. with an enigmatic background. The girl in the flower dress herself, Raina, apparently shares Skye's mysterious heritage. She's the only character we've seen other than Skye's mother who was able to physically touch the Diviner without turning into stone and dying. And in the promo for the midseason finale, we see her tell Skye, "We finally get to find out what we become." This impending revelation surrounding Skye and Raina is obviously the focal point of the episode, as the hour is titled "What They Become."

So what will they become? What did Raina even mean by that? First things first: despite Skye's assumptions, she and Raina are not technically aliens — at least, not according to Raina, who says they are humans with the potential to be... more. This statement, along with the tease in the promo that Raina and Skye are about to undergo some sort of transformation, lends much credence to the popular Inhuman theory.

As Bustle has discussed before, the Inhumans were the result of Kree experiments on human beings, which gave ordinary people extraordinary abilities. Essentially, they're the X-Men, but instead of being born with powers, they're given powers. This explains why Raina insists she and Skye are not strictly speaking aliens. But if they are Inhumans, how would Skye not know that? Where is she hiding her awesome superpowers?

The reason Skye may not know that she's an Inhuman is that Inhumans appear to be totally normal homo sapiens until they're exposed to a substance called Terrigen Mist. The Mist is a vapor derived from mutagenic crystals, discovered by the Inhuman geneticist Randac. As a rite of passage, every Inhuman is exposed to the Mist, after which their previously latent powers finally manifest, and they are appointed an according position in the Inhumans' rigid caste society.

So if the Diviner is the key that identified Skye and Raina as Inhumans, as well as the map that led them to the temple, then the Terrigen Mist is likely what awaits them inside. The question is, what will happen to them once they've been exposed? Hopefully their special heritage will prevent them from going insane like Mack. But if they survive the metamorphosis, what will they look like on the other side? Will Skye suddenly be able to fly? Will Raina suddenly become telekinetic? Your guess is as good as mine, but one thing is certain: no matter what, nothing on the show will ever be the same after Skye and Raina go inside that temple.