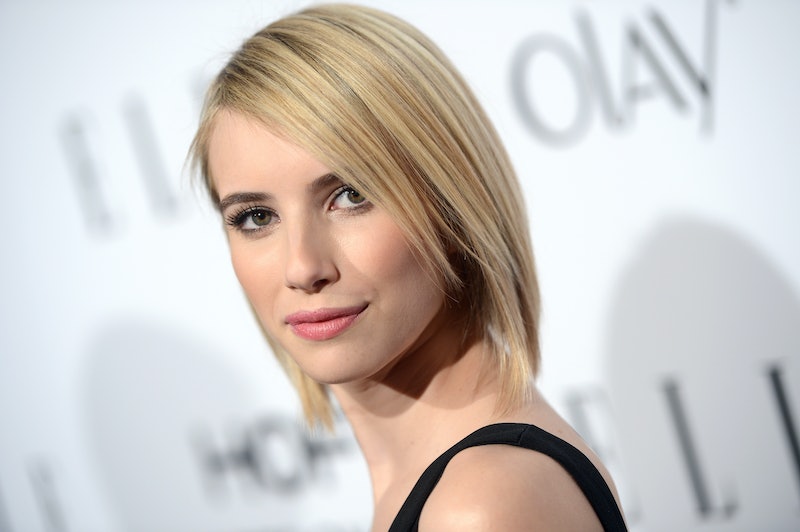 If there are two things that Ryan Murphy, creator of Glee, American Horror Story, and Nip/Tuck, can do right, it's comedy and horror. When it was announced that Murphy would be embarking on a new journey, Scream Queens , a horror-comedy anthology series, fans of American Horror Story cheered and fans of Glee sang it from the rooftops. The show has two female leads, as the title suggests, and centers around a college campus that has been hit with multiple murders. When the show was announced, speculation of who would star in Season 1 immediately began. On Monday, we learned that Emma Roberts and Jamie Lee Curtis have been cast in Scream Queens .

Roberts will play one of the two young actresses set to star in the show. The second lead has not decided upon (or at least not released) yet. Casting details as to who exactly these women are playing is being kept quiet for now, which is understandable considering that Murphy is one of the best secret keepers in Hollywood. (For example, what is American Horror Story Season 5 going to be about? Still waiting on an answer to that one.)

Roberts is currently starring in American Horror Story: Freak Show as Maggie Esmeralda. Maggie came to the Freak Show as a con-woman influenced heavily by Stanley, a man who is killing the members of the show for money. Maggie's character is more complicated than just being a sidekick, however, since she is often plagued by her conscience when it comes to how she and Stanley are sabotaging the show. Maggie also has feelings for Jimmy Darling, which adds to the complicated nature of her character. Roberts has also starred as Madison Montgomery in American Horror Story: Coven.

Curtis has been working on multiple movies recently, along with appearing on New Girl as Jess' mom. She definitely has the chops to play a character in a horror show, especially considering she has an impressive resume in the genre. Not only has she starred in scary movies in the past like Prom Night, but she has also been in quite a few Halloween films. Plus, she starred in Freaky Friday, which, although not a true horror movie, is still a pretty terrifying concept.

The show won't premiere until fall of 2015, but until then you can try to figure out what the heck is going on in American Horror Story. That should keep you pretty busy.