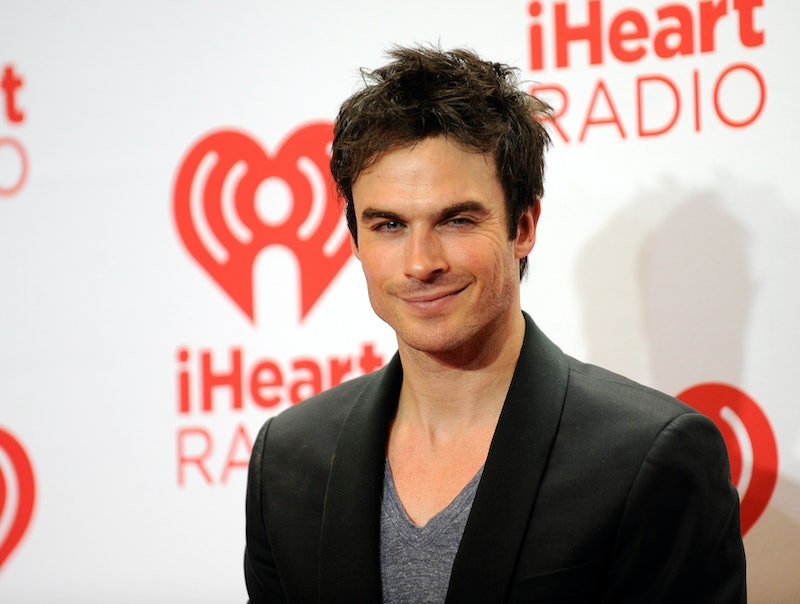 The world of show business is filled with a vast array of Hollywood hunks. However, amid all of this glorious male eye candy, there is one man who far exceeds the rest, and that is the dreamy Vampire Diaries star, Ian Somerhalder. I mean, there's good looking, and then there's this guy. He's basically working on a whole other level of attractiveness, almost to the point where I've questioned (multiple times, might I add) that he may actually be a vampire because no ordinary human being is that perfect. It's just not possible or fair for the rest of society's egos.

However, despite my many reservations on the matter, Somerhalder is (probably) not a supernatural creature, which means those beautiful genetics are 100 percent legit. (Thank you, science.) But it's not just really, really, REALLY good DNA that makes Somerhalder so amazing. He's also extremely dedicated to his charities (as any Twitter, Facebook, and Instagram follower can tell you) and all-in-all he's a downright decent guy, which makes his mere existence all the more unbelievable. So given the fact that it's the Smolderholder's 36th birthday, I thought now would be as good a time as any to reflect on the all the times Somerhalder was simply too perfect for real life.

When He Hung Out With This Puppy

If that isn't enough to make your heart melt then you may need to go find a nearby minster because you officially have no soul.

When He Nonchalantly Showed Some Serious Biceps

Oh these? Yeah, they're alright, I guess.

When He Tried Playing Coy

When He Tried Not Playing Coy

This moment > everything else.

When He Wore This Suit

Seriously, how are you a real person?!

When He Ruffled His Hair

An act we've all envisioned doing at least once.

When He Was One With Nature

Oh, to be a leaf on that tree…

When He Wore This Tux

Or really any tux, for that matter.

When He Gazed Into Our Soul

The Smolderholder takes no prisoners.

When He Made Eyebrows Look Super Sexy

Whether they're furrowed or raised, this guy's facial expressions prove he can be just as drool worthy with his clothes on.

When He Reminded Us Of What's Really Important

An easy feat considering his mere presence helps to brighten the mood of any room.

Any Time He Emerged From Water

When He Busted a Serious Move

Bonus points for including his TVD co-star Michael Trevino.

When He Made Mondays Not Sound So Bad

Suddenly, it now feels like my favorite day of the week.

When He Was An Ab-solutely Fantastic Dancer

When He Made Pizza Seem Even Tastier

When He Gave Us Some Tongue Action

Now if you'll excuse me, I have to go take a cold shower. BRB.

More like this
13 Memorable Beauty Moments From Paris Fashion Week S/S 2023
By Olivia Rose Ferreiro
Bustle Daily Newsletter: September 29, 2022
By Hayley Schueneman
The Chicest ’90s Updo Hairstyles To Try
By Paris Giles and Rachel Lapidos
Lily Collins Got Shaggy Curtain Bangs For Emily In Paris Season 3
By Audrey Noble
Get Even More From Bustle — Sign Up For The Newsletter