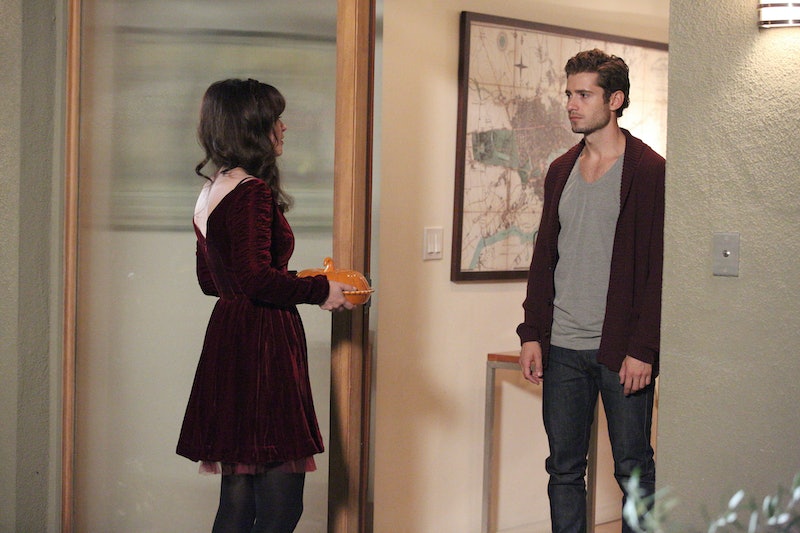 I am not generally a huge fan of guest stars on my favorite TV shows, especially ones with a lovable regular cast like New Girl. But that may be changing for me. After Julian Morris's recurring appearance on the show as Ryan Geauxinue, the new (and incredibly attractive) teacher at Jess's school, I'm in love. Maybe it's his gorgeous face or maybe it's the British accent, but this guy is pretty irresistible, and I wouldn't hate it if he got to stick around for the rest of the season. But after this week's episode, New Girl is sadly taking a winter hiatus. When my favorite roommates return after the holidays, will Ryan be back on New Girl?

Unfortunately, there doesn't seem to be an answer to that question just yet. Ryan will definitely be appearing in Tuesday's new episode, "LAXmas," when the gang gets into trouble at the airport on their way to head to their respective hometowns for Christmas. Beyond that? That information isn't yet available, although my fingers are crossed that he'll be returning when the show is back with new episodes on January 6, 2014.

As far as the timeline of Ryan's relationship with Jess goes, it seems like the show is definitely planning to keep Julian around awhile. As the first major relationship Jess has entertained since splitting up with Nick at the end of Season 3 — something that I took way harder than those two did — I feel like it's a big deal that she's willing to cross boundaries as vice principal for the sake of starting something with Ryan. Plus, their relationship has just barely begun. I will go to my grave swearing up and down that Nick and Jess are endgame, but I like Ryan. A lot.

And according to New Girl showrunner Liz Meriwether? Things are looking good for Ryan having an extended stay on the show.

The Ryan relationship is going to carry through for a while. Last year, we went into the season in a much more serialized way. We had to arc things out. And the problem with that was we were airing episodes, getting feedback and then changing the arc. ... It was hard to stick to what we decided at the beginning. And this year we just wanted to focus on comedy and simple stories from the start. We waited to get into the longer arc.

Fingers crossed that the "longer arc" means many, many more episodes to come.

More like this
'The White Lotus' Season 2 Trailer Teases Multiple Affairs & Another Dead Body
By Bustle Editors
Who’s The Richest 'Grey’s Anatomy' Star? See The Net Worth Of Each Cast Member
By Hugh McIntyre
Dan Levy Appears In The Latest Teaser For The Weeknd's HBO Series, 'The Idol'
By Jake Viswanath
Kidnapping Victim Jan Broberg Is Prepared For A Friend Of The Family Criticism
By Brad Witter
Get Even More From Bustle — Sign Up For The Newsletter