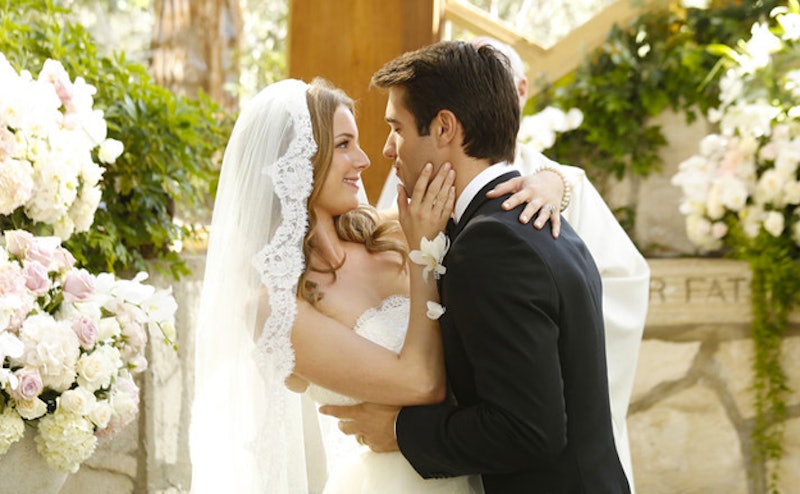 (Spoiler alert: This post contains major spoilers about the Dec. 7 episode of Revenge.) It was clear from the first few minutes of Sunday's episode of Revenge that the series was gunning it in its redemption arc of Daniel Grayson. What wasn't necessarily clear right off the bat was that they had good reason for gunning it: Daniel was not long for this world. In fact, he'd be dead by the end of the episode, another felled in Revenge 's tradition of offing characters to simultaneously trim the fat and provide main character Emily with further emotional ammo for her revenge plots. But Daniel's death was still a shocker. He was one of the show's original cast members, and one of the core characters many assumed was relatively death-immune when it came to shocking finales and sweeps week spectacles. Alas.

Daniel was also one of Revenge's most inconsistent characters when it came to his allegiances — and Revenge is a show of people constantly shifting their M.O. Daniel was a character who volleyed almost endlessly between sympathetic, clueless, and clued-in '80s-style villainy, and he left relatively redeemed: trying to save his ex-wife, after an episode full of flashbacks reliving his moral struggles under the iron fist of his father.

In honor of his passing, let's relive the highs and lows of Daniel Grayson's long, twisty run on Revenge.

This might have been the moment I loved Daniel Grayson most. When he was at his most stereotypical, an Ivy League trust funder who'd much rather be reading Keats and writing poetry than following in his father's footsteps in the financial sector. Emily interrupts his poetic philosophizing to give him some advice he spends the rest of his life struggling to take.

There are several different moments that could fall under this umbrella, so just know that any time Daniel found himself working with his father was a time I was heavily side-eyeing the screen. Let's have this count as at least three "worsts."

It's so sweet! He has no idea she's just trying to destroy his family! Aw!

Genuinely sweet, though, is this quote: "No one's ever made me feel as safe and understood as you make me."

Dammit, Daniel, shooting people is not nice! Shooting your new wife because you found out she wasn't pregnant is even more not nice! This was a genuinely effed up moment. I may have screamed at the screen. In case you didn't know, Revenge is a pretty effed up show.

BEST: Daniel Has a Weird Flirt Session with Ex-Wife in Elevator

The moment this show tricked me into being into Daniel and Emily again was the moment I became forever confused by their manipulation of my emotions. HE SHOT HER! WHY AM I INTO THIS! THIS GOES AGAINST ALL OF MY PRINCIPLES!

BEST: Daniel Desperately Wants to Help a Woman by Testifying in Her Rape Case

Flashbacks in Daniel's final episode revealed a time in the past when Conrad tried to convince him that testifying in the case of a woman raped by one of his fraternity brothers would be detrimental to his future since he'd be siding with the woman's story. Daniel argues that this isn't about him or his future, it's about the woman and what she went through in all of this, and he sneaks out to testify even after his father thought he'd convinced him not to.

Conrad catches him, and, in a moment typical of their relationship, talks his son into being a lesser man in the name of not rocking the boat. Daniel's weakness was his biggest tragedy.

It'll be a while before I've fully sorted out my own feelings on Daniel Grayson's departure, but this episode clearly put in work to looking at how Daniel became the flawed, weak man he was for much of his life — and his voice-overed letter at the end of it was a good indication that he'd always wanted to be strong enough to make the good decisions.

My whole life I’ve been told I was destined for greatness based solely on the virtue of my name. I was taught sacrifice was for the foolish. Survival was all that mattered. But now I find myself at a crossroads and I must decide what I believe to be true. There is no such thing as destiny. Legacies must be earned by the choices we make. I now know that we write our own endings. And we can either choose to hide as villains or live as heroes.