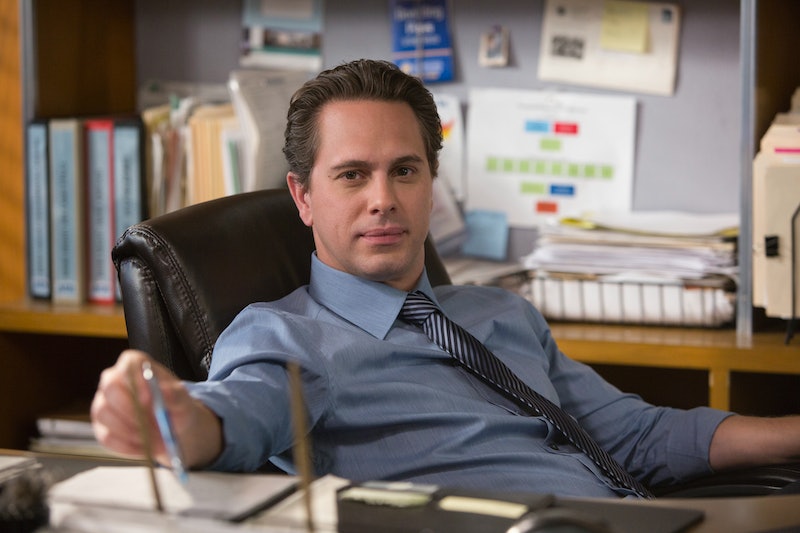 (Spoiler Alert: This article contains major spoilers about The Newsroom.) On Sunday, HBO aired the penultimate episode ever of The Newsroom, which resulted in one big death, but rather than the killing off of a character, many are talking about the mishandling of a campus rape accusation story. It comes at a time when Bill Cosby is being accused of sexual assault and Rolling Stone is apologizing for their coverage of the University of Virginia rape story, resulting in the sad fact that many women will now most likely be called into question when they "cry rape." Now, The Newsroom is under fire for its poorly depicted view of campus rape and accuracy problems, rightfully resulting in many criticism from TV critics and viewers.

For those unfamiliar with the Aaron Sorkin show, the subplot about rape involves a character named Mary (Sarah Sutherland) who was sexually assaulted by two fraternity brothers. After reporting the assault, nothing is done by the campus or police, so Mary, a Princeton student, is left to fend for herself, like so many women unfortunately are. Mary takes to the Internet by creating a website for rape victims to share their stories and name their attackers. ACN producer Don (Thomas I) visits Mary on behalf of the news network who wants Mary to come on the show to discuss the rape and confront her attackers. However, he tries to persuade her not to make an appearance. Rather, he tells her that he needs to "ensure an innocent person [like the men potentially named on the site] isn't destroyed." So, basically, the rapists have become the victims, and Mary is seen as the attacker.

Now, many are reacting angrily, including a writer of the show named Alena Smith. She took to Twitter revealing how she tried to contest the rape story and was even kicked out of the writer's room for her argument. Here are her tweets:

(FYI, Hallie is a Newsroom character who got fired for tweeting something controversial from the show's account.)

Just like Smith, many are taking to the Internet to express their distaste for The Newsroom and Sorkin. For example, take David Sims from The Atlantic, who says,

This is The Newsroom at its worst, through and through. I have no problems with a show that explores the heroism of journalism, perhaps while balancing that against ethical quandaries. But this is not a heroic moment, and it’s an embarrassment to watch it treated as one.

However, the criticisms aren't causing Sorkin to lose sleep. In a response to Mediaite, Sorkin defends himself, the episode, and is "happy" about the "passionate debate" stemming from the rape story. He even references the debate he had with Smith saying, he "heard Alena's objections and there was some healthy back and forth." He adds, "I gave her more time but then I really needed to move on. Alena still wouldn’t let me do that so I excused her from the room."

Sorkin doesn't stop there and goes onto say that Smith broke the first rule of a writer's room with her tweets — confidentiality. "That’s what happens in writers rooms and while ours was the first one Alena ever worked in, the importance of privacy was made clear to everyone on our first day of work and was reinforced constantly. I’m saddened that she’s broken that trust."

Whether you agree or not with any of these arguments, it's hard to argue with the fact that this story line comes at a time when rape victims, seemingly more so than usual, are being scrutinized, put through the wringer, and in turn having to defend themselves when they are already dealing with so much. It's a subject that should be handled with care and something that should never be taken lightly or mistreated.