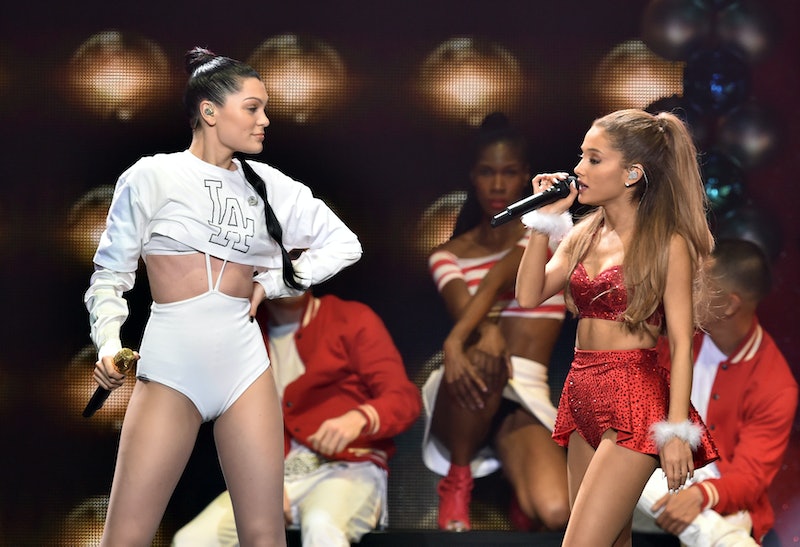 I remember the day Twitter almost imploded vividly. The year was 2014. It was the eleventh day of the month of November. The catalyst: Legendary producer Rodney “Darkchild” Jerkins told HITS Daily Double he was working on a cover of Brandy and Monica's “The Boy Is Mine”. He said pop stars Ariana Grande and Jessie J would be tasked with recording a “reimagined” version of the 1998 megahit. Many—myself included— gnashed our teeth and clawed at the sky when we read this. (I can't speak for everyone, but my feelings weren't personal. I really do love Grande and Jessie. But nobody messes with "The Boy Is Mine". ) Well, it looks like our visceral reactions were all for naught: Both Grande and Jessie J deny that cover is in the works.

According the Mirror, when asked about the reported "The Boy Is Mine" duet, Jessie J said the following:

No, it’s not true, neither of us have agreed. Sadly people are believing it. I spoke to Brandy and I was like, ‘no it’s not happening’. Monica and Brandy are the best.

No that’s such [a rumor]. It’s a classic. It should remain untouched … I’m a humongous fan of that song and Brandy is one of my favorite vocalists ever. I don’t think I would [cover the song], just because I love the original so much. I would love to work with [Jessie J and Nicki Minaj] again … Maybe just not on a cover of such a perfect classic!

Well, then. There it is. I have zero idea as to why Darkchild said otherwise, but "The Boy Is Mine" will not be covered by Jessie J and Ariana Grande. Looks like the perfect song will remain untouched after all.

Again, no offense to Ari or Jessie, but WHEW. Gave us quite a scare!

More like this
The Spice Girls Just Dropped A Brand New Music Video
By Sam Ramsden
Kate Bush Revealed The Real Meaning Behind 'Running Up That Hill' Lyrics
By Darshita Goyal
What Does Nancy Jo Sales Think Of 'The Real Bling Ring'?
By Arya Roshanian
Netflix Reveals First Look At Wednesday In The 'Addams Family' Spinoff Series
By Bustle Editors
Get Even More From Bustle — Sign Up For The Newsletter