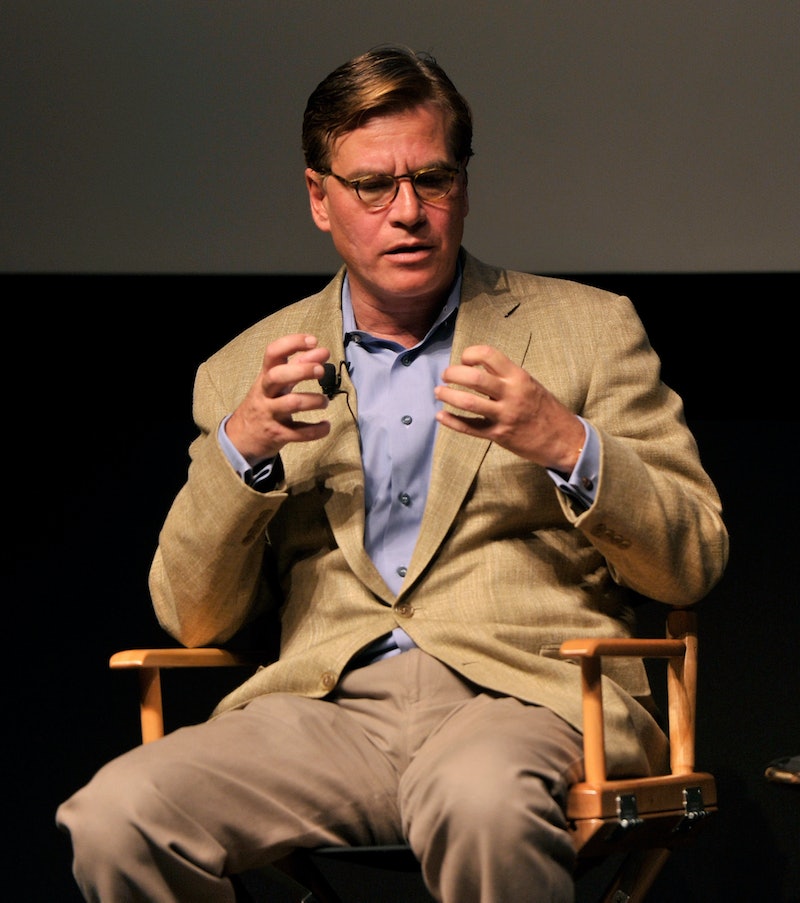 Sunday's episode of The Newsroom — the show's second-to-last episode ever — has sparked a lot of debate and a lot of antipathy in the hours since it aired. At first the discussion mainly surrounded the (freakishly, unfortunately timely) ways in which the episode talked about campus rape and journalism. Given Sorkin's history as a writer — and especially given The Newsroom's history in the sanctimonious — the debate brought Sorkin as a figure along for the ride. And that only increased when, Monday afternoon, one of Sorkin's Newsroom writers entered the debate by recounting that Sorkin kicked her out of the writer's room after she voiced objections to the way the rape story was being written.

The writer in question was one Alena Smith, who joined The Newsroom 's writing staff for the show's third and final season. Responding to a great piece by New York Times TV critic Emily Nussbaum that explores why the episode was so — in Nussbaum's words — "crazy-making," Smith issued a series of tweets telling a story that is very interesting in the wake of Sunday's episode and in relation to a number of wider questions about writer's rooms, representation, and (after Sorkin's response) confidentiality. From Smith:

Let me take a moment to say that I understand that the story in last night’s episode (305–'Oh Shenandoah') about Don trying to persuade a Princeton student named Mary (Sarah Sutherland) not to engage in a Crossfire-style segment on his show has catalyzed some passionate debate this morning. I’m happy to hear it.

It catalyzed some passionate debate in our writers room too. Arguments in the writers room at The Newsroom are not only common, they’re encouraged. The staff’s ability to argue with each other and with me about issues ranging from journalistic freedom vs. national security to whether or not Kat Dennings should come back and save the company is one of their greatest assets and something I look for during the hiring process. Ultimately I have to go into a room by myself and write the show but before I do I spend many days listening to, participating in and stoking these arguments. As with any show, I have to create a safe environment where people can disagree and no one fears having their voice drowned out or, worse, mocked.

Alena Smith, a staff writer who joined the show for the third season, had strong objections to the Princeton story and made those objections known to me and to the room. I heard Alena’s objections and there was some healthy back and forth. After a while I needed to move on (there’s a clock ticking) but Alena wasn’t ready to do that yet. I gave her more time but then I really needed to move on. Alena still wouldn’t let me do that so I excused her from the room.

The next day I wrote a new draft of the Princeton scenes–the draft you saw performed last night. Alena gave the new pages her enthusiastic support. So I was surprised to be told this morning that Alena had tweeted out her unhappiness with the story. But I was even more surprised that she had so casually violated the most important rule of working in a writers room which is confidentiality. It was a room in which people felt safe enough to discuss private and intimate details of their lives in the hope of bringing dimension to stories that were being pitched. That’s what happens in writers rooms and while ours was the first one Alena ever worked in, the importance of privacy was made clear to everyone on our first day of work and was reinforced constantly. I’m saddened that she’s broken that trust.

So what to make of this? There are good arguments to be made for writer's room confidentiality — a lot can and should be thrown on the table for good writing in a group setting, especially when you're dealing with big issues. But there are also some strong arguments to be made about the value of transparency, especially when you're dealing with the people who create our popular culture and our media. There's a responsibility there, and a value in pulling back the curtain.

Smith didn't reveal here the personal stories her fellow writers were sharing; she recounted a moment in which she didn't feel like her boss was listening to her as she urged him to reconsider the way he was dealing with a story about rape. Considering the gaping flaws in the way the script ended up, maybe Sorkin could use more voices like that in his life.