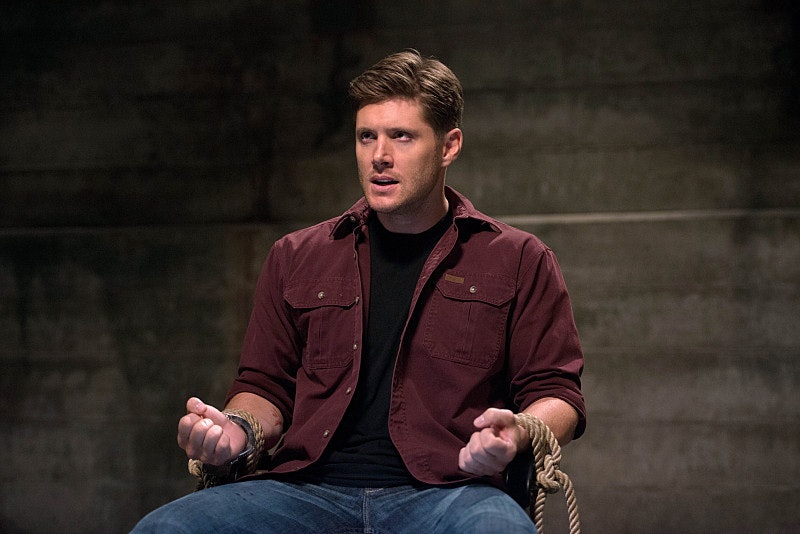 On Tuesday night, The CW will air the Supernatural Season 10 midseason finale and it sure looks to be a bloody fantastic one, thanks to the promo gushing blood, teasing torment, and promising to "ignite the Mark" — the Mark of Cain that is. Not only does it look to bring back the villainous demon Dean Winchester we were all promised this season, but the winter finale also might prove to be a dreaded and emotional one. As showcased in the promo (found below), Dean makes a troubling declaration to Castiel, and one fans hope doesn't happen as he says, "If I do go dark side, you gotta take me out." Whether his angel BFF has to knife him, spike him, or throw him into the freaking sun, Cas must do whatever it takes to put a stop evil Dean. Oh, and one more thing: Cas can't let Sammy get in the way, because he will do whatever it takes on his part to save his big brother.

In addition to Dean's plea to Cas, Crowley also might believe Dean is the same man he road-tripped with, or so it seems. The King of Hell proclaims, "Son, you haven't changed." Maybe Crowley just wants his former BFF back? There's a good possibility he's missing that once beloved bromance. Then again, now that Crowley's bewitching mother Rowena, who we learned about last episode, is in the picture, she'll surely be taking up quite a bit of her son's time. It doesn't really matter, because Dean is shown covered in blood, all while surrounded by butchered dead bodies.

As solemn as Dean looks with blood smeared all over his face, I'm not sure how to take this. Is it for real? Is Dean dreaming? Is the Mark of Cain causing Dean to hallucinate? For those not wanting Dean to go dark, you better hope it's all just a bad nightmare and something Dean fears might happen, especially since that Mark is still permanently a part of his arm.

This all brings me to one important question: with the Mark of Cain alive and well, does that mean Demon Dean/Deanmon can return? It makes sense, right? As we watched in Season 9, that dark Mark helped turn Dean into the one thing he hates the most, a demon. Whether he does or doesn't return to his demonic state of mind, the Mark of Cain is relevant and will most likely push Dean to his worst state — again.

Even though he previously swore to Sam that the Mark is not affecting him, you know it is. Sadly, Dean is stuck between a rock and a hard place. He even admitted to hunter Cole that he's reached his breaking point and there's no turning back for him. Dean believes he will die doing the job (which makes sense, and I think it's something some fans also believe to be true), so maybe this Mark will do just that. You never know what will happen on Supernatural.

As much as I want Dean to be his normal self, aka the man who loves pie, sex, porn, and hanging with his brother Sammy, there's a part of me hoping Demon Dean will somehow return. Since the end of Season 9, the series got fans excited about a demonic Dean and we only got to enjoy him for a short bit. Talk about a disappointment. Also, it just seems way too easy that Sam could cure Dean with the snap of his fingers. It's all part of some ruse, right? I need more Jensen Ackles being evil and deliciously bad. Let's hope the midseason finale answers one of my many Christmas wishes.