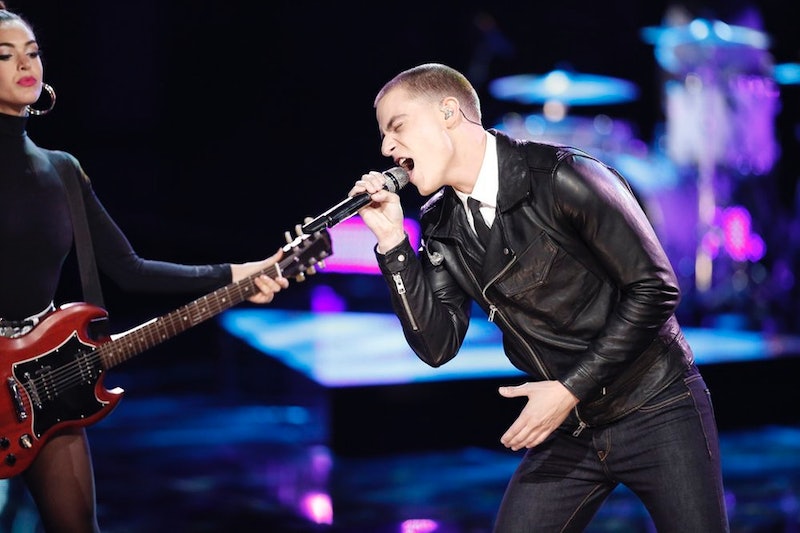 What's better than being on Adam Levine's team on The Voice? Getting to perform Maroon Five's new single on The Voice under the direction of Adam Levine. (Well, I could think of a million other things including Adam Levine that would probably be better, but as far as The Voice goes, that's the best.) Chris Jamison got to do just that in the Top 5, all because he simply asked his coach if he could. Jamison gave his falsetto a workout in his performance of "Sugar," and he definitely impressed his coach.

After hearing Jamison perform this song, it's clear there are a few similarities between him and his coach. He definitely has the sexy rockstar thing down like Levine, as was clear in his adorable dance moves and interaction with the female back-up singers. His falsetto is on point, and probably the strongest part of his voice. It's not easy singing that high, and he does it flawlessly while moving around the stage and putting on a killer performance. Jamison's voice fit perfectly into "Sugar," (and so does Levine's, since it was made for him) and was a great choice for him at this point in the game.

It's no secret that Jamison hasn't had the smoothest journey through this competition. He's been in the bottom more than once, and had to fight for the instant save after the Top 8. He always makes it through, though, which shows that America really has a thing for him. This could keep saving him, but Jamison is less experienced and has a lot more to learn than the other Top 5 contestants, which is why he probably won't make it through to the next phase of the competition. Whether he continues on or not, he'll always be able to say that he performed a Maroon Five single for Adam Levine himself, and that's pretty amazing in itself.