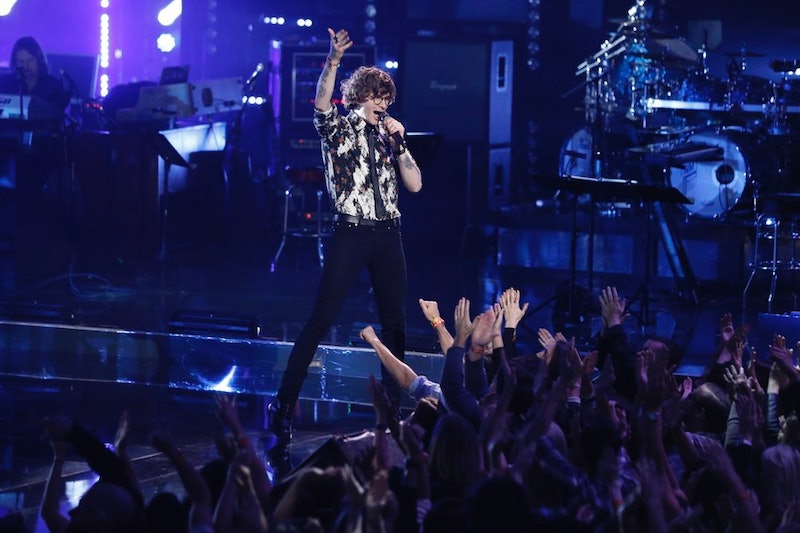 Seeing The Voice contestants back in their hometowns shows you what this show is really about. Whether or not an artist wins the title of The Voice, they still earn a name in the music industry and a become celebrity in their own community — if not all across America. Though Damien's visit home was truly inspirational (as is every performance and everything else he's done on this show), there was something really touching about Matt McAndrew's trip home to Philadelphia. The rocker is a major force in this competition, but seeing him interact with his students showed how much of a true artist he really is.

I seriously teared up hearing McAndrew's students talk about how amazing he is. It was clear how inspired they were by their teacher, and how much they wanted him to succeed. One major part of becoming a celebrity, or even a recognized figure, is using your fame for good. Taylor Swift is the greatest example of this — seriously, she's like Mother Teresa when it comes to interacting with fans — but, alas, not every artist can be like her. It was evident in McAndrew's hometown video that he could become Swift-like (or at least close to her level) if he were to become a major celebrity, because he already interacts with and shows appreciation to his fans.

So as inspiring as the visit was, this show is called The Voice, so let's touch on that. McAndrew has delivered amazing performances week after week, and this performance was no different. His rendition of U2's "What I'm Looking For" was powerful, energetic, and definitely would've made Bono proud. McAndrew is the whole package. I'm not convinced he can beat Damien for the title — can anyone? — but there's a major chance he'll make it to the finale and go out fighting.

More like this
Jason Derulo Is Launching A New Singing Show In The UK
By Maxine Harrison
18 Years After 'American' Idol, Jennifer Hudson & Simon Cowell Reunited On Her Talk Show
By Radhika Menon
How To Stream 'Pretty Wild'
By Arya Roshanian
Here's Exactly When Rachel & Tino's Fight Happened After 'The Bachelorette'
By Grace Wehniainen
Get Even More From Bustle — Sign Up For The Newsletter