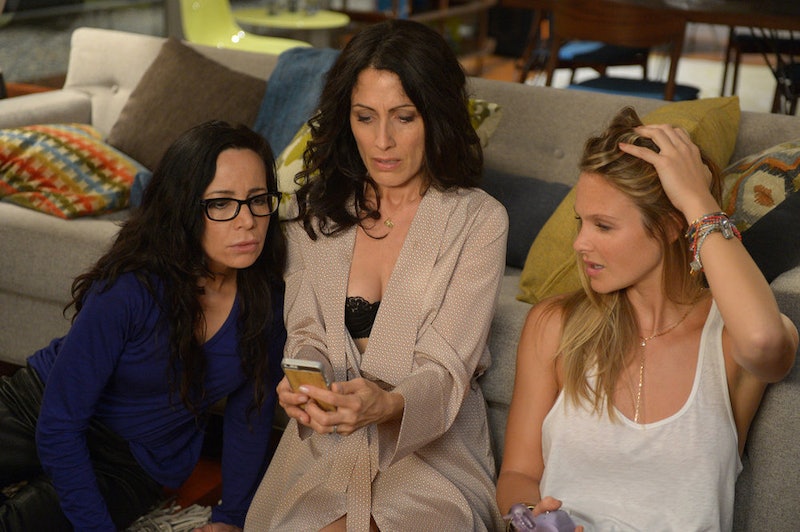 The Real Housewives of Beverly Hills, for example, is the most similar to Bravo's new scripted show in that they both take place in Los Angeles metropolitan area. But beyond that, there are actually a lot of similar topics that are handled in both series that tackle issues like female relationships, romantic relationships, wealth, and powerful women.

While one is scripted and one isn't — well, at least that's the official word by Bravo, sometimes I question the realness of the Real Housewives — here is a list of what the two series have in common and where they differ.

Women's Relationships With Each Other

Both shows revolve around women's relationships with each other; the good, the bad, and well, you know the rest. While both series also include the men and children in each other's lives, we primarily see how the women on the shows support each other, especially while going through big changes in each others' lives.

Women Not Supporting Each Other

Here's where the shows differ. In the many seasons, and many towns that Real Housewives has tackled, one thing sadly rings true: Many of the women will do anything to bring someone else down for her gain. Each season, there is at least a pair of women who have it out for the other and will say destructive things about each other. On Girlfriends' Guide, we see a much more supportive environment between Abby and her friends. For example, when Abby slightly derailed during her book signing appearance, her friends were right there with her, where as the Real Housewives would probably have a mean comment to say.

Many of the Housewives have created brands or companies in light of the spotlight Bravo has given them. While some of the products are a little strange/ never take off, you have to applaud the women for giving entrepreneurship a try. Some of them (ahem, Bethenny Frankel) are crazy successful, others not so much. On Girlfriends' Guide, Abby and her friends all have careers that allows them to be independent and powerful women, which is a great message.

Both shows not only feature women getting their drink on, but they are the perfect series to grab a glass of wine (or Ramona Pinot Grigio, or whatever) and sip along to.

More like this
Kathy Hilton’s 'RHOBH' Controversy Wasn’t Entirely Caught On Camera
By Jake Viswanath
Kathy Hilton May Not Return To 'RHOBH' — At Least Not Full Time
By Jake Viswanath
Teresa Giudice Flipped A Table — Again —  On The 'DWTS' Season 31 Premiere
By Jake Viswanath
Clayton & Susie Broke Up, Citing "A Significant Amount Of Pain" After 'The Bachelor'
By Jordyn Tilchen
Get Even More From Bustle — Sign Up For The Newsletter