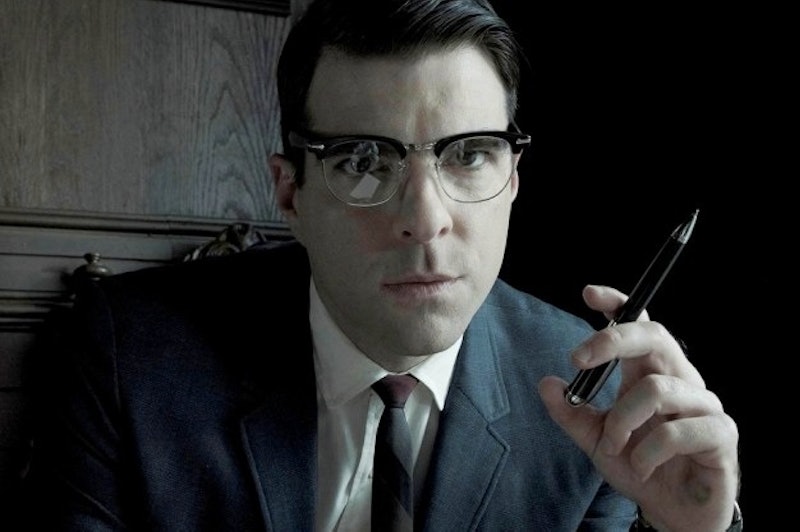 AHS is no stranger to handsome psychopaths, so it's no wonder that fans have started asking if Asylum and Freak Show's crazy handsomes Dandy & Bloody Face are connected. The murderous rich boy has intrigued fans in the same way that these other American Horror Story bad guys (and, in Fiona's case, gals) have, but if you ask me, that notion that he's a Bloody Face prequel of sorts is completely bogus.

There's a line of dialogue from the first season of American Horror Story that has always stuck out in my mind. It's this: "The Devil is real and he’s not some little red man with horns and a tail. He can be beautiful because he's a fallen angel and he used to be God's favorite." The character who says this quote is referring to Tate Langdon, the handsome, charming, and downright monstrous ghost residing in the Murder House. And Tate was only the first of the beautiful villains that American Horror Story introduced us to. It is the people who have fooled us with their good looks and charm that have revealed themselves to be the most monstrous of all the characters on the series, from Murder House's Tate to Asylum's Dr. Thredson to Coven's Fiona Goode. American Horror Story reminds us that evil comes in many forms, and that it doesn't always come with warning signs — as evidenced by our newest big bad, Freak Show' s Dandy Mott.

The idea that evil can hide beneath a beautiful surface is horrifying, and AHS knows that there's nothing more unsettling than someone being capable of concealing their evil nature until it's too late for their would-be victims to do anything about it. Now that AHS creator Ryan Murphy has revealed that there is a connection between Asylum and Freak Show, fans thought that there may be a connection between the season's big bads, Dr. Thredson (aka serial killer Bloody Face) and Dandy (murderous name still pending). Could Thredson and Dandy team up when Asylum and Freak Show's timelines coincide? Could Thredson kill Dandy and take over his murder spree? Is Thredson Dandy's still-unseen therapist? The fan theories are endless, but I'm not so sure they hold weight — mainly because I don't think that's the point of Dandy.

American Horror Story wouldn't be as popular as it currently is if it were simply a horror show. It's designed to scare, but it's also designed to be provocative — and, ultimately, it leaves viewers with a message a little bit more complicated than typical horror fare. And though it often gets murky when paired with all of the other theatrics of the show, the message this season is that physical appearance can mask someone's true intentions. The so-called "freaks" are blamed for evil actions they don't commit, while Dandy, a truly evil human being, walks around without anyone questioning his behavior. That's why I can't see the show joining Thredson and Dandy's mythologies — these characters are more than just villains; they're metaphors for how the world sees certain people. And to complicate that metaphor just seems unnecessary.