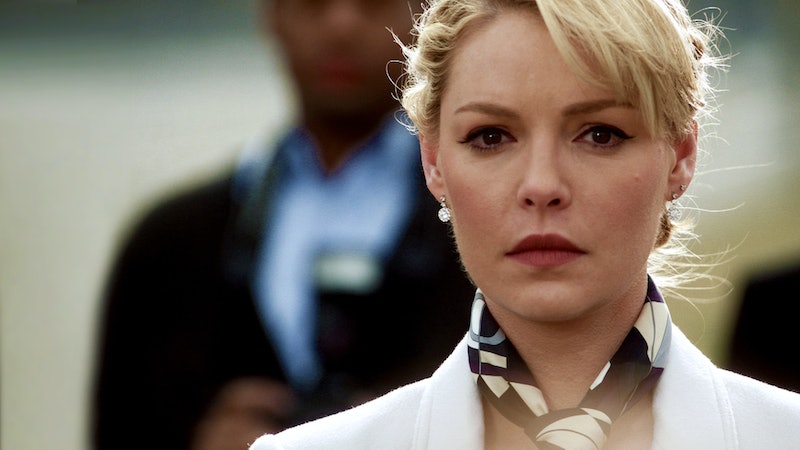 THE BIGGEST MYSTERY OF STATE OF AFFAIRS HAS BEEN SOLVED! Turns out, the phantom terrorist kingpin Chaka Khan actually doesn't share a name with the R&B national treasure and songbird. His name has been "Sheikh Hakan" this whole time, so don't I feel like a big silly pants? What a hilariously zany mix-up! In other news, State of Affairs Episode 4, entitled "Bang Bang," gave us more reason to be suspicious of Charlie Tucker. What is Charlie Tucker hiding anyways?

At the beginning of the episode, we see Charlie confront Fada in his torture chamber. She tells him that they have something in common: a desire to cause pain and suffering. And then you're like WHAAA??? Did she want to hurt her husband? That doesn't seem to be where the writers are trying to go, but something smells a bit rotten here... Tucker, what secrets are you concealing in your subterfuge-filled French Twist??

She's certainly been hiding her ignorance of the hidden emoji keyboard this whole time. For a woman who knows everything, it's a bit surprising that she has no knowledge of the fact that there is a gun emoticon. It's hiding right there in plain sight, Tucker. Especially in your line of work, with all the firepower and death threats and intrigue, it would probably be your favorite character. Right after the smiling pile of poo.

The other states of the other affairs: Then there was a smallpox outbreak in Panama, civilians were infected, and one of their main operatives on the job may have been a spy. Alfre Woodward is very good at her job, especially when it comes to shooting down rivals who are trying to blackmail her. Way to beast the presidency, lady.

Luckily, we've made a bit of headway into the cryptic texting "Whodunnit?" With that burner cell in the garbage chute all those shredded documents, it would appear that the person taunting her is one of her own team. My money's on the handsome yet highly untrustworthy new briefer who is quietly hellbent on Charlie's destruction.

One thing Tucker is definitely not hiding is her sexual attraction to this Nick individual. Tucker and Nick finally made out, releasing their bursting dam full of sexual tension. But alas, just as things were getting especially hot and heavy, Nick was kidnapped literally right from Charlie's lips, and we got a bomb dropped on us: the gun that killed the president's son was registered to Nick Vera. BLACKOUT.

Next week on State of Affairs, we explain away that predictable cliffhanger. Until then, I'll be waiting on the edge of my seat to see what the CIA has to say about this week's episode.