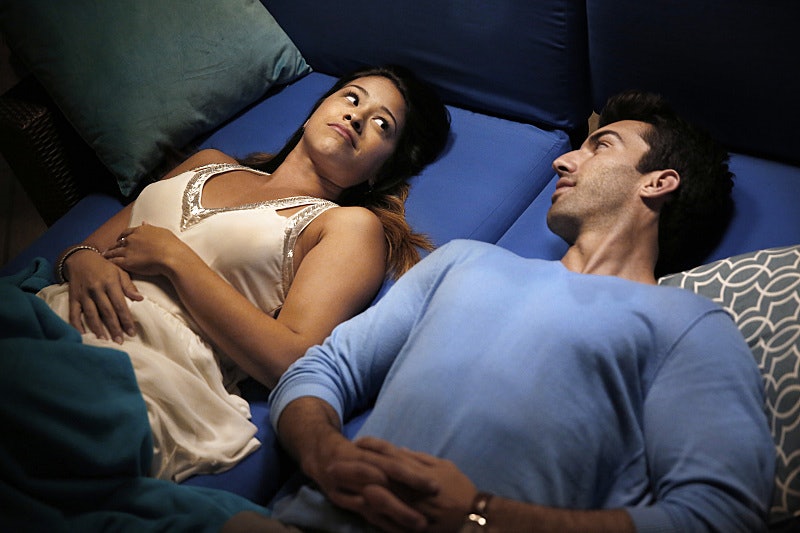 If you're getting whiplash from the Jane and Rafael relationship on Jane The Virgin , you are not alone. These two are straight out of Katy Perry's "Hot & Cold," because one week they are together, and the next week they aren't (at the beginning of the episode, because then at the end they usually get back together). On Monday's episode, Jane and Rafael's status changed two times throughout the hour, but alas, at the end, they were still together and literally creating sparks with each other. This time it may be different, though, since the elephant in the room — a.k.a., the lawsuit Jane has against Rafael and subsequently all of his wealth — is finally a thing of the past.

The relationship between Jane and Rafael had a bumpy start on Monday night, when Jane broke the news to Rafael that she was a virgin. It's not that he acted poorly to it, but he definitely didn't act well to the news. Let's just say a lot of "it's fine"s were said throughout the conversation, and as we all know, it's rarely "fine."

Then enters Rafael's infidelity. In a somewhat unnecessary plot to hurt Rafael even more, Petra set up Rafael with an escort and paid the woman to drug him and make him think that they had slept together in the morning when he woke up, which of course Jane walked in on. It's not that I think Petra isn't cruel enough to do something like this, I just don't know what her motive was to doing it, then again, I feel like I don't get a lot about Petra. Jane and Rafael break up, but eventually get back together at the end of the episode, and things are finally looking up for them.

We learned that Jane's abuela is not a legal citizen of the United States, and all of the legal drama that Jane was going through made Alba nervous. Jane dropped the suit, not knowing Rafael's potential financial loss at stake, which will not only help her abuela feel safe, but also make things a lot easier for her and Rafael. Now that the two aren't battling in court for a baby they both want to raise, they'll hopefully be able to focus more on the relationship that is budding between them.