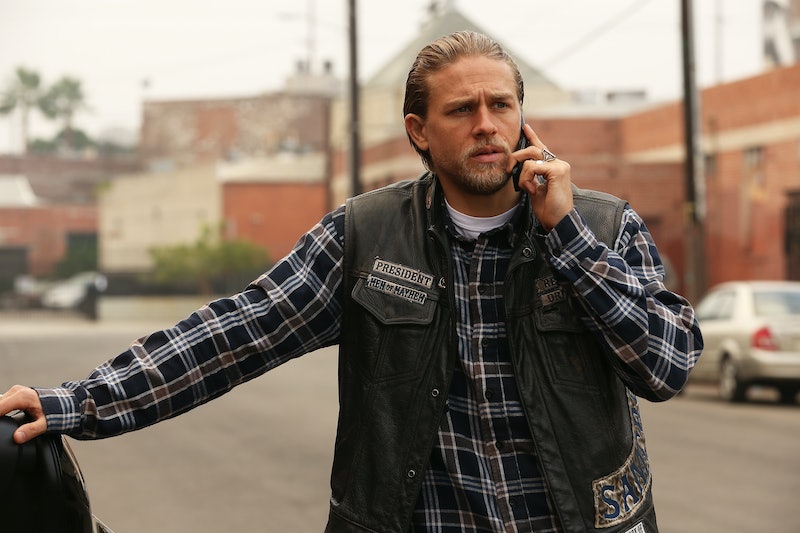 There are fantastic episodes of television out there, but what Sons of Anarchy has been bringing to the table for its seventh and final season has been on a whole different level of greatness. Last Tuesday’s game-changing SoA episode “Red Rose” was a prime example of that, which saw the demise of not one, not two, but THREE pinnacle characters. (RIP Gemma, Juice, Unser, and my will to live.) Seriously, folks, I did not see any of that coming, which is making me start to question everything I thought I knew Kurt Sutter had planned for his SoA series finale, including the death of Jax Teller. For seven seasons now, this SAMCRO President has had the grim reaper on his back (both literally and figuratively), making his meet with Mr. Mayhem feel inevitable. But what if we’re wrong. What if Jax doesn’t die by the time this final ride is through?

Last we saw, things were not looking good for Jax in the survival department, given that, at the forum, the Sons charter presidents straight up said Jax’s unjust killing of Jury meant the Mayhem vote must pass. They want him to pay the ultimate price — something Jax seemed more than willing to accept. In fact, his surprisingly truthful confession gave the distinct impression that it’s the outcome he actually wanted. Is this his guilty conscience speaking or does Mr. Teller have some genius plan up his sleeve we have yet to know about?

After all, Jax has managed to get himself out of some pretty sticky situations in the past, so why should this be any different? But how? From where I’m sitting, if he survives (and in my mind, that’s still a very big if), there are a few different ways I could see Jax’s non-deadly fate playing out.

He Leaves SAMCRO To Start A New Life

Nero’s farm has become a constant focal point of the show, representing the possibility of hope and a chance to start over. For a while we’ve assumed that was in reference to not just Nero, but Jax’s sons. But what if it’s a means of escape for Jax himself as well? If he somehow manages to get out of this whole Jury mess still breathing, Jax could join Wendy and the boys on the farm, start fresh, and leave this life of Mayhem behind… for good.

He Goes To Jail For His Crimes

With Unser no longer around to serve as a middleman, Jerry may seize the chance to put Jax behind bars for all the death and destruction he has caused. He’s made several allies throughout the prison network (Marilyn Manson included), so I’m sure he’d be able to set up some form of protection for himself during his sentence. In a way, it would kind of be poetic. For years Jax has managed to outrun the law, so to have it be the thing to finally take him down would feel ironically appropriate. Justice will have finally had its day.

He Remains In SAMCRO Forever

Perhaps Jax’s ultimate punishment isn’t meeting Mr. Mayhem, but rather never finding a way to escape this life that both he and his father wanted out of. And knowing that that same fate will eventually fall upon his two sons. The cycle of bloodshed and crime will continue for each generation of Teller men, and there’s nothing Jax can do to stop it. Which, in many ways, is a fate worse than death.

More like this
Shonda Rhimes' Net Worth Makes Her One Of The Wealthiest People In TV History
By Hugh McIntyre
The Best 'Grey's Anatomy' Intern Moments, From MAGIC to Glasses
By Grace Wehniainen
At 14, Jurnee Smollett Was Taking Meetings With Missy Elliot & Lauryn Hill
By Chloe Foussianes
'The Rings Of Power' Episode 7 Will Feature An “Unlikely Pairing Of Characters”
By Grace Wehniainen
Get Even More From Bustle — Sign Up For The Newsletter