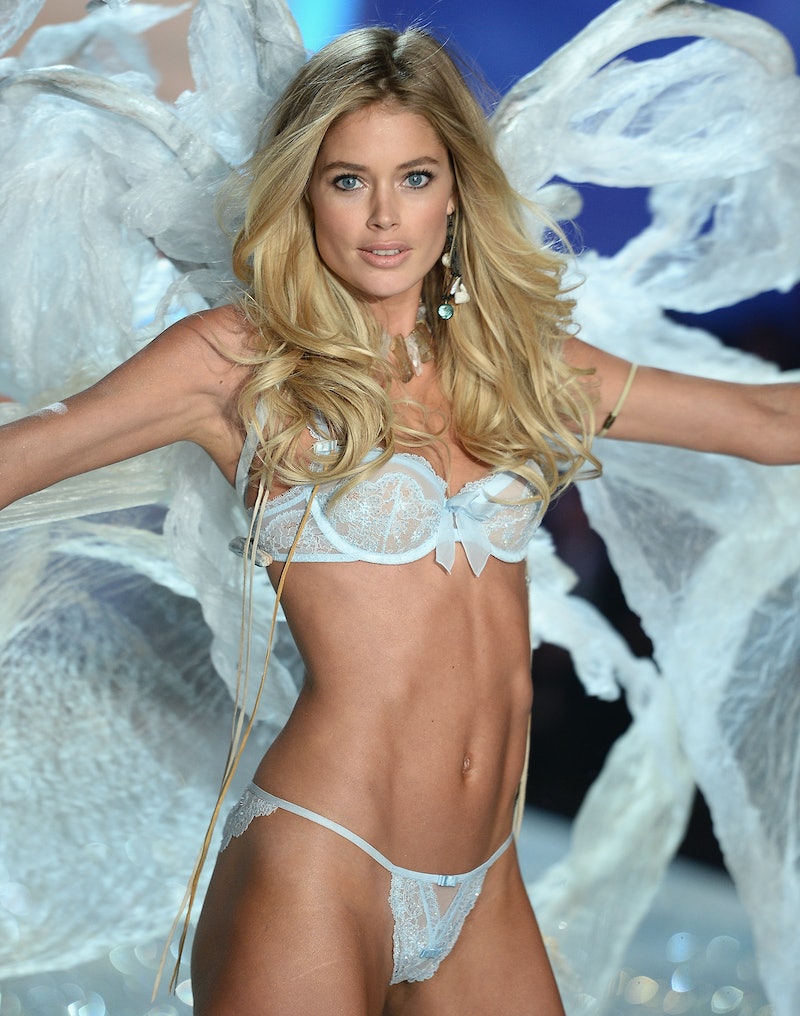 I spend much of the Victoria's Secret Fashion Show mentally shopping. Just in time for the holidays, the Angels are basically a walking catalog. Everything they wear, I want... Unfortunately, the wings cannot be bought, they must be earned, but mostly everything else is up for grabs. Dreams do come true, so you actually can buy most of the stuff the Angels model in the fashion show. I hope you've saved your coupons!

In fact, a ton of the stuff that will be modeled in the show is already available for purchase in stores and on the Victoria's Secret website in a special section populated only by VS fashion show picks. You can find just about everything from leggings to sports bras to make-up bags and everything in between, and a lot of it is actually super cute. If you're looking for a train case that will remind you of that time you watched the best television event of the year every time you do your make-up, this one is my favorite — and at $28, it's totally affordable.

And of all the items listed on VS from the fashion show, I am obsessed with this pretty pink crew neck. It looks super comfy, and would be so cute with leggings. I have always been a champion of real clothes that look like jammies.

The most high profile item of the night is, of course, VIctoria's Secret's traditional blinged out, ridiculously expensive bra that would look terrible under all types of clothing and is basically only useful if you have $1 million laying around that you weren't planning on spending and the kind of job where you can show up in a diamond bra and jeans. The bra of 2014 won't be revealed until during the fashion show that night, and after that, it'll be available for purchase — but let's be real, has anyone ever actually bought it?

Who am I kidding? Of course someone has.

And according to the New York Daily News, this year's bra will total $2 million and will be worn by Alessandra Ambrosio and Adriana Lima while the rest of us cry about not being able to pay back our student loans. Life, why must you be so unfair?

More like this
Gigi Hadid Has Been Wearing UGG Boots Nonstop At Paris Fashion Week
By Dominique Norman
Kaia Gerber’s Zara Collab Is This Autumn’s Minimal Chic Dream
By Darshita Goyal
How To Wear A Bucket Hat Like Rihanna, Dua Lipa, & More
By Allie Fasanella
Bella Hadid Will Think Of Her Spray-On Dress From Paris Fashion Week “Forever”
By Brad Witter
Get Even More From Bustle — Sign Up For The Newsletter