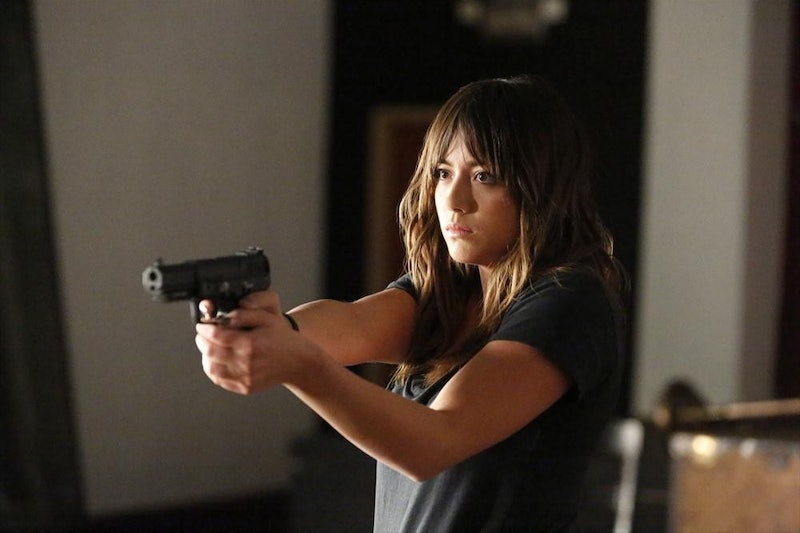 Okay, brace yourself for bad news. After what's sure to be a majorly cliffhanger-y midseason finale of Agents of S.H.I.E.L.D. (last year's featured Coulson's kidnapping, and the show's major upswing is any indication, this year's will feature even higher stakes), we're going to have to dig in for a long, cold, S.H.I.E.L.D.-less winter. After the Dec. 9 episode, Agents of S.H.I.E.L.D. won't return for the second half of Season 2 until March 3, according to TVLine.

Yup, March — in other words, an absolute eternity. I feel like I need to go bear-style and reserve a lot of fat deposits so I can dig in for a few months of S.H.I.E.L.D.-induced hibernation (shoot me in the chest with the night-night gun, why don't you?). With everything that hangs in the balance, from Skye/her crazy dad, Skye/her immortal mom (who might still be alive), and Skye/her true identity (are you sensing a theme here?), you can bet that we're going to be screaming for answers at end of the hour on Tuesday. Though, to be fair, showrunner Maurissa Tancharoen did demure in a recent interview with Entertainment Weekly, regarding Skye, "You will learn her real name sooner than you think." So maybe we'll at least be finally learning that in the midseason finale, "What We Become."

Unfortunately, Tancharoen also rather ominously said, "After the midseason finale, things will never be the same again," so I'm guessing more questions will be raised than answered. It's going to be tough to wait three whole months to solve the cliffhanger, but at least we're not left out in the cold, because — Agent Carter and the Howling Commandos to the rescue — ABC will be running its highly-anticipated Agent Carter miniseries during S.H.I.E.L.D.' s hiatus.

Agent Carter (which stars Hayley Atwell, reprising her star-turn of a role from Captain America: The First Avenger) is set to explore the genesis of S.H.I.E.L.D. We've already gotten a few glimpses of her post-war world, and it promises to be cinematic and awesome. Another bonus? According to Deadline, Enver Gjokaj (who you might remember as the guy who did the most spot-on Topher Brink impersonation ever) will be playing a "sweet and honorable...war hero who has risked his life many times." Sounds perfect for the ever-lovable Gjokaj, now all we have to do is hope Dichen Lachman and Reed Diamond stop by on their way home from their S.H.I.E.L.D. flashbacks so we can have a mini Dollhouse reunion!

So as much as it hurts to know that S.H.I.E.L.D. won't be back until March, Agent Carter premieres on Jan. 6, so you'll have a lot to keep you occupied in the mean time (thank goodness).