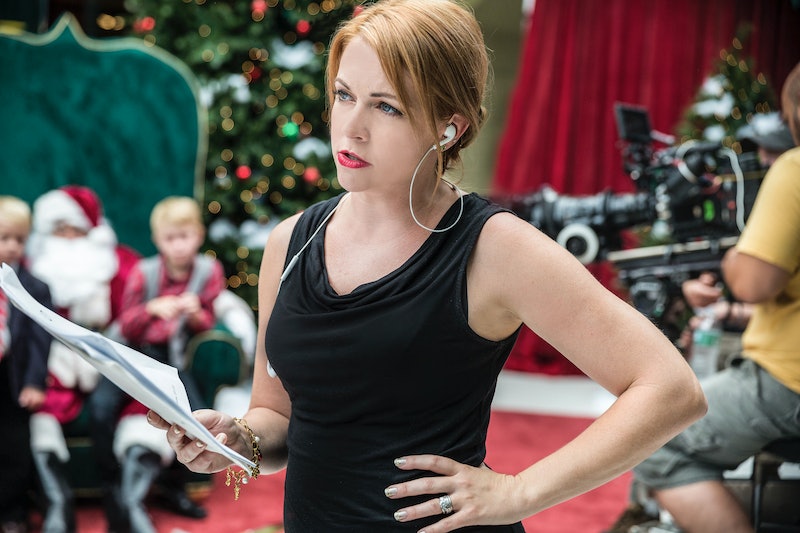 You've gotta have respect for Melissa Joan Hart — the beloved actress has endured throughout the years. In the '90s, she was the coolest teenage gal alive in Nickelodeon's Clarissa Explains It All and magical in Sabrina the Teenage Witch, and now she's playing a mom to kids in the hit ABC Family comedy Melissa and Joey. Last week, she and her family charmed us in those entertaining Walmart commercials during NBC's Peter Pan Live. The 38-year-old has also graduated from being an actress in front of the camera and now Melissa Joan Hart is also a director behind the camera. Hart has directed several episodes of various TV shows since 1999, along with directing and starring in Lifetime's TV movie The Santa Con , premiering Saturday night.

In addition to directing, she plays Rosemary, the sister of Barry Watson's character, Nick DeMarco, a small-time con man who gets sentenced to reluctantly take a job as — guess what? — a department store Santa. Sure, he may hate the gig at first, but then he embarks on a heart-warming holiday adventure to grant a little boy's wish to reunite his estranged parents in time for Christmas. While she's helmed many TV episodes, this is Hart's first time behind the camera directing a TV movie. Here's her directing resume so far.

All the way back in 1999, Hart sat in the director's chair for the first time for an episode of this paranormal Disney Channel series — and it was a family affair. The episode, titled "Snapshot," guest-starred her younger sister Emily. In 2001, Hart returned to Nickelodeon to direct an episode of the series Taina.

Directing was just something that the actress was always curious about. "From my days on Clarissa, I was constantly following the directors and shadowing them and talking to the crew and figuring out how the cameras worked and trying to play with the lighting boards," she told Pop City Life. "I was always very curious about all the stuff going on behind the scenes."

The Santa Con isn't the first time Hart has played double duty. She directed six episodes of the sitcom during its final seasons.

"It was really complicated to film with all the magic and talking animals," Hart told Pop City Life. "We had a permanent green screen. It was very complex and we constantly had directors coming in and out that were confused and asking us, 'Wait, how do I do this?' So instead of us answering those questions all the time, we took it amongst ourselves to direct including myself, Beth Broderick, our UPM. We had a lot of people behind the scenes on our show that started to step up and direct a few episodes."

Hart has continued calling the shots on her hit ABC Family sitcom, which co-stars Joey Lawrence. She started directing various episodes in the second season of the series, including Season 4's Halloween special last October (which also guest-starred Broderick).

"It’s a lot of work to be in front of the camera and behind the camera, but I enjoy it," Hart told Pop City Life.