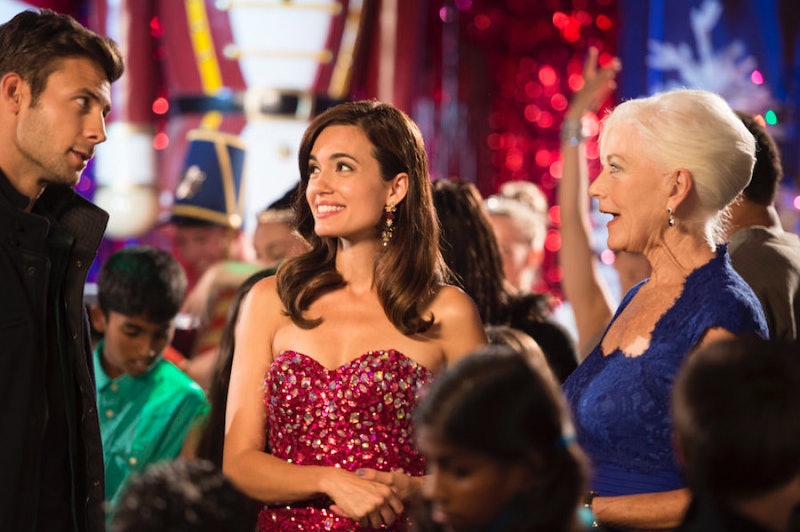 Christmastime is awesome — you have every excuse in the book to drink (and spike) some eggnog, eat an extra slice of that holiday pie, and head to every damn party you're invited to, because why not? It's a time to celebrate while you're staying warm in these chilly winter temps. Hallmark Channel promises to have the Best Christmas Party Ever , premiering Saturday night in the form of a TV movie. Torrey DeVitto and Steve Lund star as polar opposites who must work together to throw an awesome holiday party for a toy store. And you definitely know DeVitto from pretty much everywhere.

The 30-year-old New York native had guest starring and recurring roles in tons of TV series, from '90s WB hits Dawson's Creek and One Tree Hill to current CBS hit series Stalker and CSI. She's also had parts in movies like I'll Always Know What You Did Last Summer, Killer Movie, and Evidence. And that's not all. DeVitto has two famous men in her life: Her dad is longtime Billy Joel band drummer Liberty DeVitto and her ex-husband is Vampire Diaries star Paul Wesley. She's also an accomplished violinist and model.

Here are the key roles you should be familiar with from the omnipresent actress' career.

DeVitto joined the long-running Lifetime drama in its seventh and final season as Maggie Hall, an ex-Army Airbone-turned-truck-driver who is also a mother of two. She arrived on base with her husband Staff Sergeant Eddie Hall. The series ended in September 2013 and aired a retrospective last March.

So, which came first: love or The Vampire Diaries? Turns out, it was love — DeVitto and Wesley started dating when they met on the set of Killer Movie , which was released in 2008. The couple married in 2011 in New York City and then DeVitto started playing Dr. Meredith Fell on the blood-sucking CW series. Unfortunately, their wedded bliss didn't last — the duo filed for divorce in 2013 and it was finalized a year ago. Wesley's rep told People that they "have decided to amicably split. They will continue to remain good friends."

No matter how many roles pad her resume, DeVitto told Zap2It that most people recognize her from one: Crazy Nanny Carrie on One Tree Hill. While filming Army Wives in South Carolina, people approached her daily about the CW series. "And I get tweeted about it, still," DeVitto said. "She was psycho, so I think that's why it stays in people's minds. I'm telling you, it's insane. And awesome, too. I feel like I'm going to be 75 years old and people will still be asking, 'Excuse me. Are you Nanny Carrie?'"

More like this
Netflix Reveals First Look At Wednesday In The 'Addams Family' Spinoff Series
By Bustle Editors
9 Movies & TV Shows That Prove Stanley Tucci Elevates Everything He’s In
By Jake Viswanath and Radhika Menon
The New Grey's Anatomy Interns Have Fans Feeling So Nostalgic For Season 1
By Brad Witter
The Best 'Grey's Anatomy' Intern Moments, From MAGIC to Glasses
By Grace Wehniainen
Get Even More From Bustle — Sign Up For The Newsletter