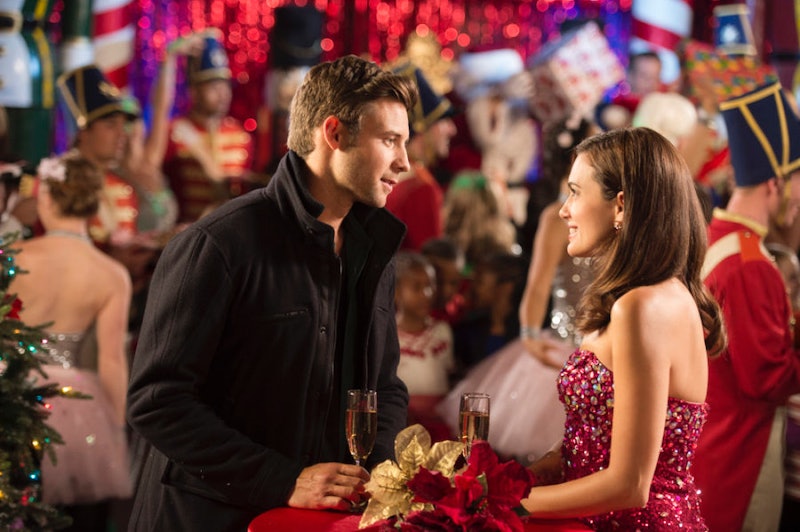 In the realm of TV movies, there are always so many kinds to choose from. You can go with a crazy SyFy portmanteau disaster flick a la Sharknado. You can tune into a melodramatic Lifetime movie, which will probably based on a celebrity's life. And then there's the wholesome, heartwarming Hallmark Channel telefilms, which also probably include an educational lesson along with two hours of being totally entertaining. In the cable network's latest, Torrey DeVitto and Steve Lund star in Best Christmas Party Ever , premiering Saturday night. You might be asking yourself, "Who in the world is Steve Lund?" Well, for starters, he's kind of a newcomer.

The Canadian actor currently stars as playboy werewolf Nick Sorrentino on SyFy's Bitten and he has a recurring role on the network's series Haven. Outside of SyFy, Lund was born and raised in Halifax, Nova Scotia, and almost pursued playing hockey as a career. Alas, acting won out and probably gave him way less blows to the head. So far, Lund has been guest starring in tons of series and Best Christmas Party Ever will be his first lead in a movie. Here's what you need to know about this up-and-coming actor before he breaks out.

His Big Break Was in the Yukon

After putting hockey on the back-burner, Lund attended the Vancouver Film School Acting Program and landed his very first role at age 19. He was cast in the Canadian series "Yukonic!" which, yes, explored the wonders of the Yukon in the Great White North through the eyes of two documentary filmmakers.

This Canadian werewolf drama series is filmed in Toronto, airs on the Space Channel in the Great White North and on SyFy in the United States. It's based on the Women of the Otherworld book by author Kelley Armstrong. Bitten follows Elena Michaels as she leads a double life. One second she's a normal gal engaged to a nice human guy, and the next, well, she's a werewolf who belongs to a pack in upstate New York. So far, there are 13 episodes in Season 1, with Season 2 on the way.

Lund's character Nick is one of Elena's pack-mates and he's best buddies with Clayton, who is actually Elena's ex-fiancé. Drama? Yup. "Nick's a very fun character. He's a fun-loving guy who I'd describe as enjoying the fruits of nature," Lund told Zap2it. "He's maybe not taken as seriously as some of the other werewolves, but he's OK with that. He knows his role within the pack."

Lund has guested on many awesome TV series, including Being Erica, Lost Girl, Blue Mountain State, Suits, Nikita, Beauty and the Beast, Defiance, and Netflix's Hemlock Grove. He also plays the Colorado Kid on SyFy's Haven.

More like this
Harry Potter's Viktor Krum Has Undergone A Huge Transformation Since Hogwarts
By Sam Ramsden and Meguire Hennes
Netflix Reveals First Look At Wednesday In The 'Addams Family' Spinoff Series
By Bustle Editors
Kenan & Kel Just Reunited At The 2022 Emmys & Twitter Is Overjoyed
By Grace Wehniainen
15 Offensive AF Jokes In 'Friends' That Really Aren't OK
By Tolly Wright, Bustle Editors and Meguire Hennes
Get Even More From Bustle — Sign Up For The Newsletter