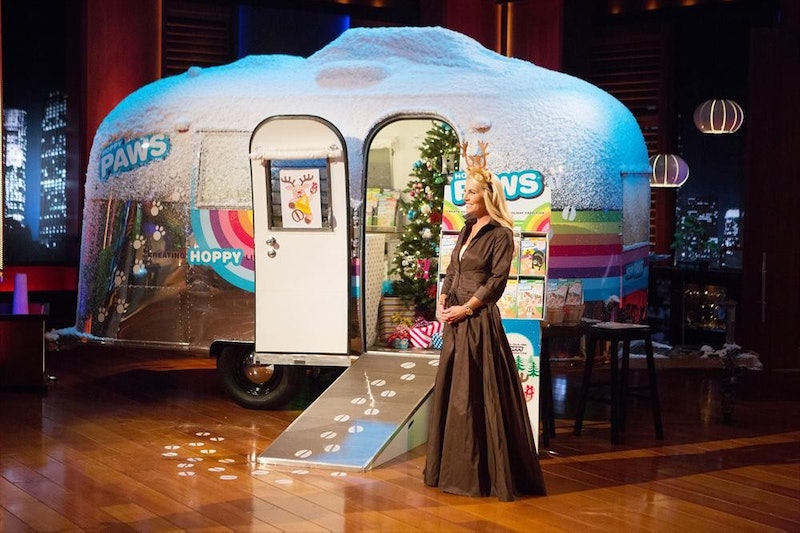 Ah, it's holiday time and it wouldn't be complete without certain things: Christmas trees, Menorahs, holiday tunes, winter TV specials, and... reindeer tracks? That's right. A woman named Trina Barkouras from Newport Beach, Calif. is trying to make cute reindeer paw prints a Christmas tradition — and not just for Santa's sleighmates. Her product, Hoppy Paws, can be used as Easter Bunny paw prints, Tooth Fairy tracks, and evidence of Santa Claus' existence. It should impress kids and young-at-heart adults alike, but will the appearance of Hoppy Paws on Shark Tank on Friday night inspire investors to make Barkouras' product just as omnipresent as the Christmas tree?

No doubt these powder-powered tracks are a cute idea that'll pique the interest of DIY mavens and Pinterest lovers. But I wonder if it's enough of a unique — and profitable — idea to get the Shark Tank sharks to open their wallets and put some big bucks into adorable little hoof prints. Barkouras invented Hoppy Paws about 20 years ago and has kept the tradition alive since, then officially became a bona fide business in 2012. The kits are also affordably priced and have varieties for several of your favorite holidays. Here's what you should know about these paw prints before seeing them on ABC — and opening your own wallet.

The Original Inspiration: The Easter Bunny

It all started on the night before Easter. Barkouras would wait until her three daughters were asleep and then created stenciled Easter Bunny paw prints (with a secret powder recipe) throughout their house, leading to Easter baskets for the little girls. "In the morning we would wake to laughter and squeals of delight as the girls would rummage through the their treasure and happily run through the house following the bunny trail out into the front yard," Barkouras wrote on the Hoppy Paws website.

After the first time, neighbors began to show interest in having their own paw-printed Easter hunt for their kids. And Barkouras obliged. "As the years passed I would carry on the tradition of the Easter Bunny trail," she wrote. "Each Easter eve, the neighborhood walkways were decorated with the cute little bunny prints. My neighbors would even leave their children’s baskets on the front porch so that I would apply the bunny trail leading to their home."

Now They Can Be Used For a Variety of Occasions

Easter and Christmas aren't the only holidays that can have prints. Right now, reindeer and Easter bunny are the only types available for purchase, but there are big plans to expand in 2015 with more stencils, including Tooth Fairy, Leprechaun, Santa's Elf, and Stork.

They Are Available for Purchase

Hoppy Paws are already for sale on their official website, as well as Shopify. And these paw print-making kits are pretty affordable — they're priced at $6.99. Kits come with a print stamp, a mixing tray, and the "super secret powder" to make the tracks. There's still time to order them and get those reindeer tracks under your tree before Christmas!