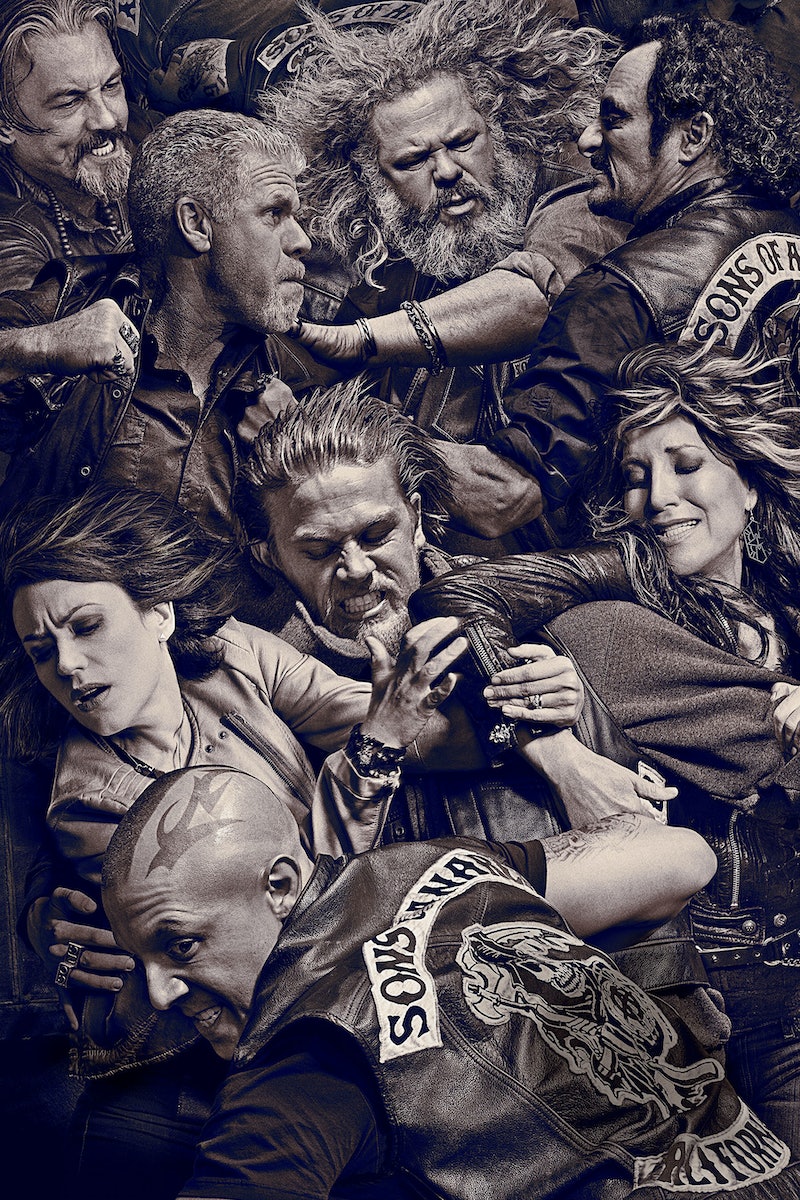 I seriously doubt that when William Shakespeare sat down to write Hamlet that he envisioned his work would one day become the concept of a television series surrounding the murderous antics of a motorcycle club. I mean, maybe he did. I really don't know what this guy sat around thinking about throughout his creative process. Maybe he could see that far into the future. Who's to really say? But regardless of his intent, Kurt Sutter has stated on numerous occasions that Sons of Anarchy is loosely based on Shakespeare's Hamlet , which means we were bound to come across quite a few comparisons throughout these past seven seasons. And that's exactly what has happened.

Anyone who's the least bit familiar with this classic Shakespearean drama knows that it's full of lies, betrayal, and bloodshed — otherwise known as the three key ingredients to any SoA episode. Death is practically SAMCRO's bread and butter, and if SoA is a true reflection of Hamlet , that means barely anyone will make it out of this show alive. But before that grim reaper comes calling one final time in what's sure to be an epic SoA series finale, I thought I'd take some time to run down our beloved residents of Charming and match them up to their (loosely based) Hamlet counterparts. Perhaps it will even help us to gain insight into how the final episode will play out. Is Mr. Mayhem to be or not to be? That is the eternal question.

So without further adieu, check out the SoA vs. Hamlet parallels below and see what you make of my pairings.

Let's start with the most obvious, shall we? Because from where I'm sitting, Jax and Hamlet are pretty much full-blown twins. For starters, they were both born rulers — Jax as the President of SAMCRO, Hamlet as the future King of Denmark. Then there's the fact that both of their fathers are deceased, which forced them to live under the watchful eye of their power-hungry step-father/uncle. And just as Hamlet eventually caused so much death and destruction in his wake, Jax's actions have proven to have eerily similar consequences, making many fans (myself included) believe that Jax will suffer from the Prince's same tragic fate.

Just as Claudius murdered Hamlet's father to rule over Denmark, Clay took up the SoA presidency in a very similar type fashion, having been directly responsible for John Teller's death. Not to mention the fact that they married the reigning Queen/Old Lady of their individual kingdoms almost immediately afterward. Basically, these were not good guys and they both ended up paying the ultimate price.

Serving as one of the main leading ladies of these tragic tales, both women were thought of as Queens (one being a more literal position than the other, of course). And while Gertrude certainly didn't cause the type of bloodshed that Gemma did, she still had to watch in horror as her son spiraled into madness with the knowledge that she was at least partially to blame. They also had a habit of moving on from their deceased husbands at a rather brisk pace.

OK, so I guess I'm kinda cheating on this one, but you have to admit that so many SoA characters fit this particular part. Polonius served as the chief counselor to the royal family and we all know how highly both Clay and Jax valued Bobby's club advice throughout the years, much like how John Teller viewed Piney during his rule. The same goes for Unser, who was constantly used as a middleman between SAMCRO and the Charming law enforcement. So vote Mayhem on me if you must, but all three work so well I simply can't decide.

I could've easily just gone with Tara here and gotten away with it, given that she (like Ophelia) is

a.) an actual woman and

b.) was the main love interest in the protagonist's life.

However, love comes in many forms and I believe Jax and Opie's epic bromance could fall under that category. I mean, even Opie's name has a similar look and sound to Ophelia. Then there's the fact that both characters pretty much went off the deep after the death of their fathers and ended up losing their lives way before their time. (RIP x infinity)

This is where things start to get a little tricky since we don't know how everything will play out just yet. However, thanks to a recent chat with Jimmy Smits, I'm starting to think that Nero will be responsible for Jax's death. And just how Hamlet understood Laertes' murderous actions, I believe Jax would feel the same way if Nero were to take him down. Someone has to be the one to stop Jax, so why not make it at the hand of the show's most honorable character?

As Jax/Hamlet's most trusted friend and advisor, both Chibs and Horatio are there for their President/King through thick and thin — so much so that they'd be willingly to sacrifice themselves if need be. And it's that very faithfulness and constant loyalty that could get Chibs (like Horatio) out of this mess alive.

The only thing worse than a spy is a rat, which is exactly what poor Juice ended up being in Jax's eyes — a direct parallel to how Hamlet's childhood friends, Rosencrantz and Guildenstern, betrayed his trust. And it's because of those actions that make all three of these characters meet a rather deadly fate.

Jax, like Hamlet, was always haunted by the ghost of his father… just in a much less literal sense. And while John's spirit never actually spoke to his son directly, his manuscript offered words of wisdom and guidance to help Jax try and escape this corruptible lifestyle. Unfortunately, that sage advice never received the follow through it deserved, and could very well result in Jax joining his father in the after life sooner rather than later.