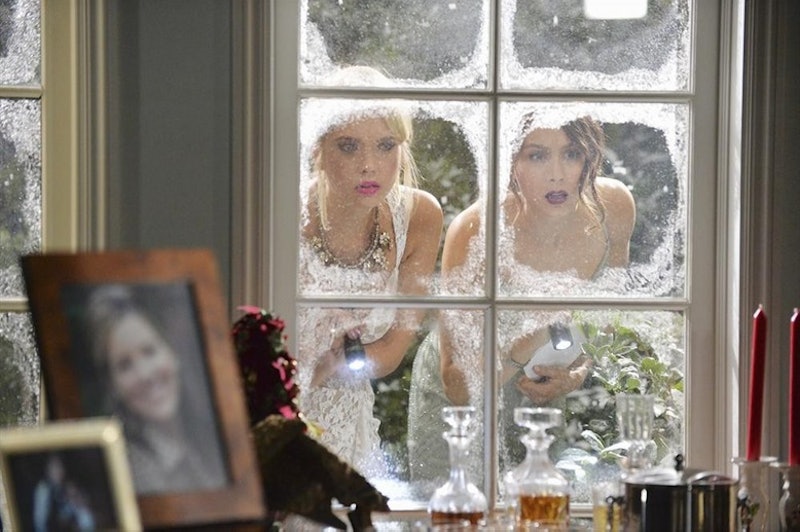 Can you believe it's here? After months (and months) of cliffhanging, we're finally going to get some answers (at least, that's what I tell myself so I can get to sleep at night). Well, regardless of what's in store for Tuesday's inaugural Pretty Little Liars Christmas special, there are a couple things we know for certain: The clothes are going to be fabulous (for the living, and especially fabulous for the dead), there's going to be #HoRo (a contraction hashtag for "horror and epic romance," according to the show's creator I. Marlene King) galore, and Hanna's going to continue to be as awesome as ever.

More specifically, though? King has been fairly generous with some cryptic (and some not-so-cryptic) spoiler tweets, and we can always comb the trailers for evidence of what's to come (which is, in fact, quite promising). While signs seem to point to the fact that this will be an Ezria-heavy episode, it's looking like Hanna will also play a large role, as the former best friend of the recently deceased Mona. So, what's in store for Ms. Marin in "How the 'A' Stole Christmas"? Let's take a step back and review what we know:

Of course she does: It sounds like Ali's voice cautioning her to "get out of my stuff." Yeesh.

This cryptic tweet would most likely point to Ali as the "newborn queen" (especially with her dramatic entrance with her brand-new posse) but then again, King cautioned her fans that we wouldn't understand until after watching the episode. Besides, with Mona gone, and the power dynamics all askew, it really could be anyone's game.

She's Setting Something From Mona's Will:

Why do I get the feeling that it'll be a mysterious clue, a la Dumbledore's parting gifts to Harry, Ron and Hermione in Harry Potter and the Deathly Hallows? I mean, a cryptic book of fairy tales is totally Mona's M.O., no? Anyway, in a recent interview with TVLine, King explained that Hanna was being singled out in the will because of her "special bond" with Mona — after all, she added "They’ve gone through so much together, and I think Hanna still has very sympathetic feelings for Mona."

Real talk, though, Mona's death is sure to be hard all around (especially as she'll be busy terrifying Ali), but I'm betting it's going to hit poor Hanna the hardest.

Santa Boxers Will Come Into Play:

King joked about bed-buddies, while Ashley Benson told fans to hold onto their hats: Because all four of the little liars' boyfriends/girlfriend will be donning Santa boxers on Tuesday. Huzzah! After all of the Ravenswood and Ali angst of Season 5A, Hanna and Caleb deserve some Yuletide cheer.

An Elf Costume Will Also Come Into Play:

Um, how much are you looking forward to seeing this outfit in action?

Are you all as excited as I am to return to Rosewood tonight? Bring on the sparkly gowns and silly Christmas-inspired novelty garments!