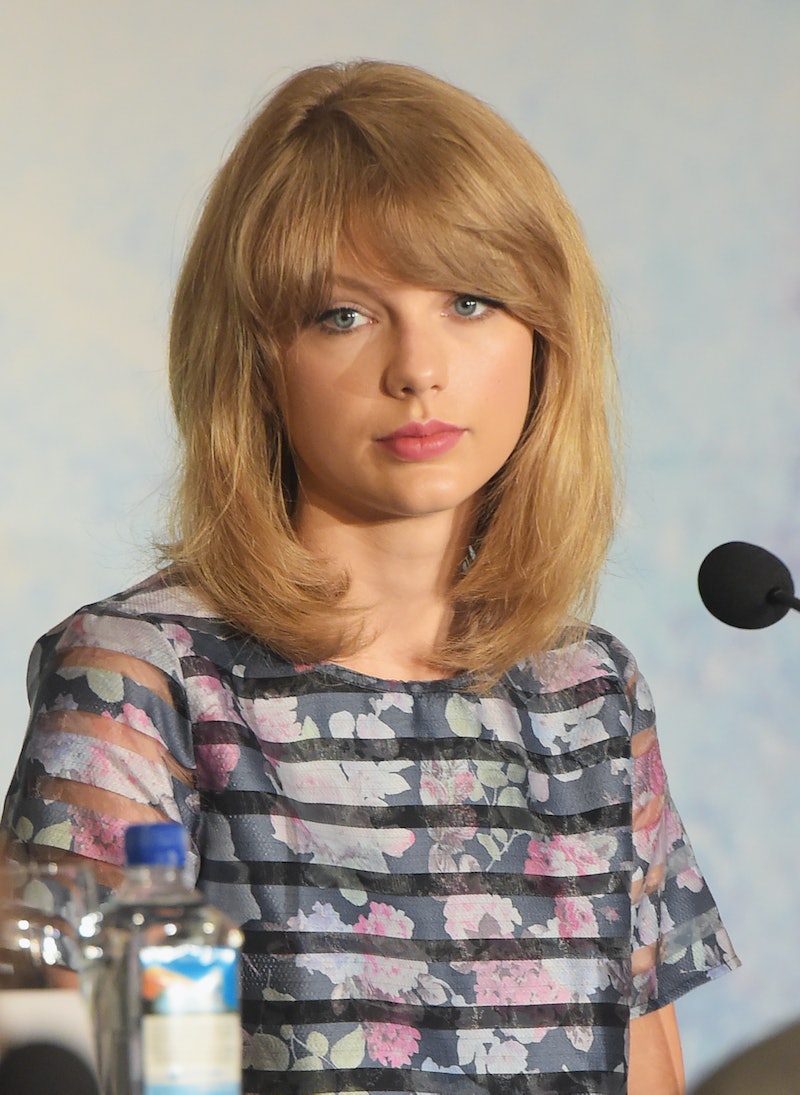 The one thing Taylor Swift wants for her birthday may be the hardest thing of all to get. On Monday, Taylor Swift rejected her latest dating rumors with a super sassy tweet. "As my 25th birthday present from the media, I'd like for you to stop accusing all my friends of dating me. #thirsty," she wrote. It's likely a response to the media firestorm claiming Swift is dating Victoria Secret model Karlie Kloss after a fan snapped a blurry pic of the two women allegedly "making out." It could also be in response to claims that she's dating musician Matt Healy.

It's not unusual for Swift to have several dating rumors going at once, but it's got to be frustrating for the singer considering she hasn't gone on a single date since she broke up with Harry Styles. Yet, in the nearly two years since they dated, she's been linked to all manner of men from "Blank Space" video co-star Sean O'Pry to her friend Ed Sheeran.

I don't blame Swift for tweeting that reply to the media speculation. But they're probably not going to listen because she's been so over her dating rumors for a year now and people are still linking her to everyone she happens to spend four seconds talking to.

Seriously, stop it now. Swift is really, really over the dating rumors and she's been talking about it for, like, ever. In fact, here are six more times she's spoken up.

This was the start of Swift's no-boys zone and she got candid about how tired she was of the rumors. "You know, if you want some big revelation, since 2010 I have dated exactly two people," Swift told Vanity Fair. "The fact that there are slideshows of a dozen guys that I either hugged on a red carpet or met for lunch or wrote a song with ... it's just kind of ridiculous."

Speaking to Rolling Stone, Swift set the record straight: she's not been on a date since the start of 2013. “People are going to feel sorry for me when you write that. But it’s true," she told the RS journalist. She also opened up about why she's been single. “I feel like watching my dating life has become a bit of a national pastime. And I’m just not comfortable providing that kind of entertainment anymore.” You go, girl.

But also, she doesn't want to provide that invasive media with any more material.

I don’t like seeing slide shows of guys I’ve apparently dated. I don’t like giving comedians the opportunity to make jokes about me at awards shows. I don’t like it when headlines read ‘Careful, Bro, She’ll Write a Song About You,’ because it trivializes my work. And most of all, I don’t like how all these factors add up to build the pressure so high in a new relationship that it gets snuffed out before it even has a chance to start. I just don’t date.

It's sad that the press has so invaded Swift's love life, but Swift wants everyone to know she's OK with being single. "It's not bad that I'm not hopelessly in love with someone. It's not a tragedy, and it's not me giving up and being a spinster. Although I did get another cat," she told the magazine, laughing.

Swift is dead serious about not dating because of the toll the media takes on her romantic life. "Whoever I date, famous or not — whether I ever date again — all chaos will break loose," she told Glamour UK. "With fabrication and frantic obsession and who likes who more and how it ended. But right now is easy because I'm single and happy, and it's very relaxing."

For Vogue UK, Swift explained that she can't see a man in her life because there's no room for him to even just walk next to her. "Dating or finding someone is the last thing on my mind, because I can't picture how it could work with the way my life is," she explained to the magazine. "I don't know how a guy is supposed to walk next to his girlfriend when there are 20 men with cameras."

Speaking to Esquire, Swift explained that she's over the idea of dating because she wanted people to see what she could do on her own.

I just stopped dating people, because it meant a lot to me to set the record straight — that I do not need some guy around in order to get inspiration, in order to make a great record, in order to live my life, in order to feel okay about myself. I wanted to show my fans the same thing.

Swift has learned from the process that taking some time away from romance is good for you. "I've done more thinking and examining and figuring out how to cope with things on my own than I would have if I had been focusing on someone else's emotions and someone else's schedule,” she told the magazine. “It's been really good... I think it's healthy for everyone to go a few years without dating, just because you need to get to know who you are."

For the Cosmopolitan UK December issue, Swift tackled the topic of dating again, or rather how she's not dating. "People will say, let me set you up with someone, and I’m just sitting there saying, 'That’s not what I’m doing. I’m not lonely; I’m not looking.' They just don’t get it," the singer told the magazine. "Life can be romantic without having a romance. I’m very attracted to how happy I am now."

I want Swift to write a book for single girls because I think she's nailed it. Sometimes even better than loving someone else, is loving yourself.

So there you have it. Taylor Swift is really, really, really not dating anyone. So for her 25th birthday on December 13 let's all shut up about her love life and just enjoy her kickass new album.