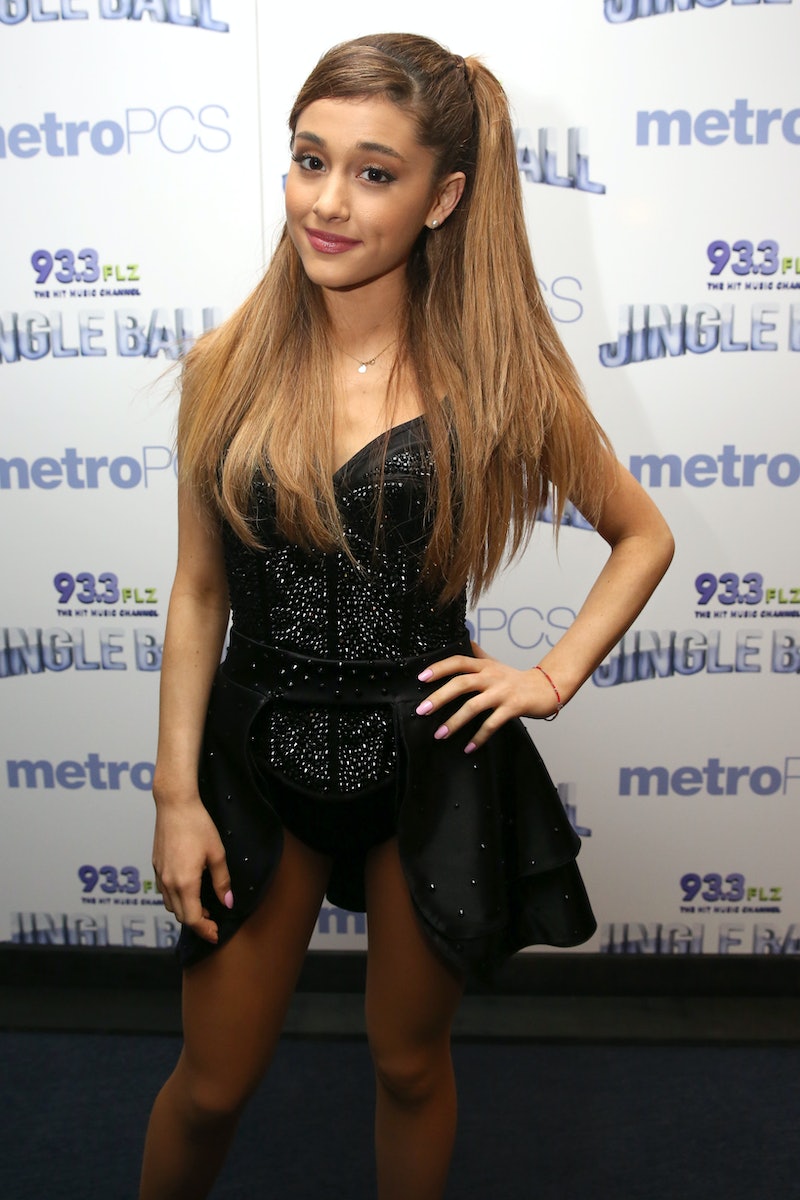 Despite wearing cat ears on a regular basis, Ariana Grande is actually a huge dog person. So I guess the myth of cats and dogs not getting along is just a myth, huh? Another myth this seems to disprove — that Grande is a heartless diva. If she was, would she care enough to rescue multiple dogs? I doubt it! Recently Ariana Grande adopted a puppy named Cinnamon and shared the news on Instagram. If you're wondering how many pups she has total, consider me a pet detective. Just like Ace Ventura, I dug up this very important answer: Grande has five dogs, counting Cinnamon. The rest of the gang includes Coco, Toulouse, Ophelia, and Fawkes Kitty. And don't worry, I'll show you photos so you can keep track... Or just stare at how cute they all are.

Starting with the latest edition to the Grande clan, Cinnamon's story is super heartwarming. According to Ari's post, the five-month-old puppy was found in a box on the side of the road. Luckily, things completely turned around. As Grande says herself:

Now she lives with me & my other babies! She will be safe, spoiled and loved unconditionally!!!!!! absolutely shatters my heart how somebody could toss an innocent creature aside like that. nothing hurts my heart more. we love you so so much Cinnamon. welcome to the grande family my babe

Phew! That's a relief. Based on how she treats her other pups, it's obvious Cinnamon is now living the life of luxury. Let's recap Grande's four-legged family!

Clearly Cinnamon is already a model. Also, I'm pretty sure her bed looks more comfy than the one I have as a human being.

If you're complaining that there are too many photos, her face below sums up my thoughts.

In August, Grande adopted Fawkes Kitty. According to her Insta description, this pup is super brave and always fights Toulouse, despite being half his size. Not sure why this dog has the word "kitty" in it's name, but we'll add it to the list of evidence that Grande is cat-obsessed. Speaking of confusing, this cat-dog also dresses up like another species... A dinosaur.

She adopted this "Chubacca monster" (aka a chocolate labradoodle) in September 2013. Apparently Grande kept the name, which was a friend's idea, because it sounded so proper and funny. Admittedly I'm disappointed by that explanation, since I was hoping she was a Hamlet fan like me. Sigh.

According to Grande, she's connected to Toulouse on a spiritual level. She adopted this beagle-chihuahua mix in September 2013 also, and the name is a reference to one of the cats in Disney's The Aristocats. Toulouse even has a parody Twitter account (with more than 31,000 followers) that tweets hilariously adorable posts, like this:

Coco is Ari's first pup. This dachshund-German shepherd mix is a self-proclaimed "happy puppy with a prominent underbite," according to her Twitter. Back when there was a joint Insta account between the original three dogs (because of course there was), Grande posted this adorable video:

So there you have it, five dogs and counting! But before we know it, I bet she'll have 101 Dalmatians. She's like Cruella de Vil, minus the whole cruel part. I'd totally watch a Disney movie about that!

More like this
Dixie D’Amelio & Noah Beck “Love Each Other” Despite Breakup Rumors
By Julia Emmanuele, Jordyn Tilchen and Grace Wehniainen
Victoria Beckham Loves Teasing David About His “Sticky” New Hobby
By Sam Ramsden
KiKi Layne & Ari'el Stachel Call Out 'Don't Worry Darling' Over Cut Scenes
By Sam Ramsden
Kourtney Kardashian Claps Back At Pregnancy Speculation On Instagram
By Jake Viswanath
Get Even More From Bustle — Sign Up For The Newsletter