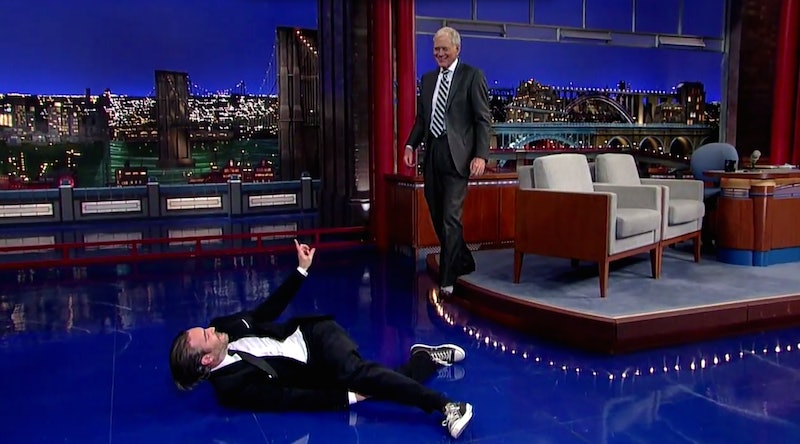 Joaquin Phoenix has participated in a lot of very strange interviews over the years. There was that time, for instance, when he announced he was leaving his life of acting to pursue a career as a rapper (a bit that turned out to be a hoax for Casey Affleck's film, I'm Still Here), and that other time when he appeared on Late Show With David Letterman to talk all about it. This, however, may just be his strangest interview yet — and I say that as someone who's generally deeply unimpressed with the weird antics that Hollywood's elite can occasionally dish out. On Monday night, Joaquin Phoenix appeared on Letterman and told a story about a yoga move he'd been persuaded to try out during a recent class called...wait for it..."harness the hog." Somehow, this segued into a demonstration of said move, before Phoenix unceremoniously announced he was engaged to his yoga teacher.

Yep, say it with me now: What?

"This is the crazy part of the story...we started dating, and I think she's the one. I proposed to her and she said yes," Phoenix said on the show, much to Letterman's shock.

Now, first red flag here: Last time Phoenix pulled some strange antics, it was on Letterman as well, so perhaps his track record of telling the truth on that show isn't quite stellar. Plus, Phoenix is A-list — wouldn't we have known if he was dating anyone, let alone a yoga teacher who thought "harness the hog" was a real-life yoga move?

Then again...he does seem genuine.

So, is Phoenix really engaged? Turns out, the cynical of us out there were right to be skeptical: He's not. After the story erupted online, Phoenix released a statement saying that the whole engagement story was a hoax, and he made it up to "spice up" his story a bit. "I think my life's so boring, and it seemed like something exciting to talk about, and I wanted the audience to like me," he said on an appearance with Good Morning America. "They really like people getting married...I can get engaged again, if you like."

There you have it: Mystery solved. The interview is still a riot to watch, mostly because — if you're anything like me — you would have never expected to see Joaquin Phoenix doing yoga, ever. But, I guess life's just funny that way.