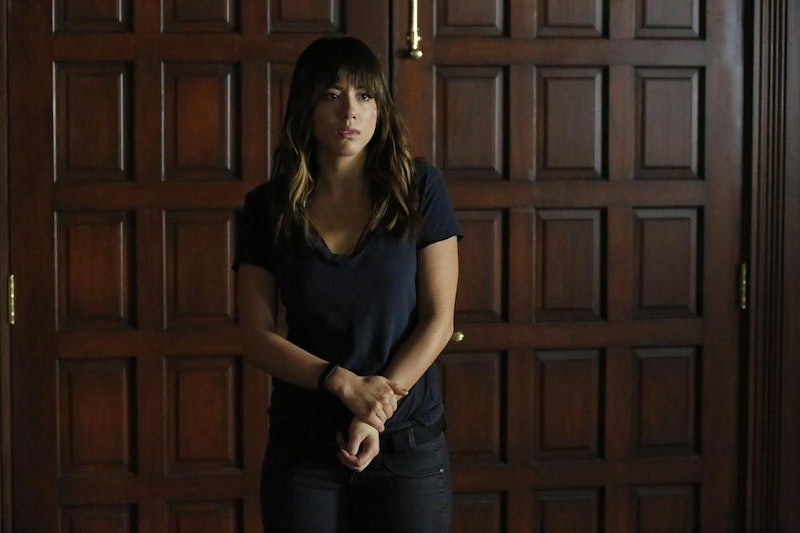 When she was first introduced on Marvel's Agents of S.H.I.E.L.D. , Skye was a "hacktivist." She's certainly come a long way from that, because now she's "maybe an alien." S.H.I.E.L.D. Director Phil Coulson is the first one to break that heavy news to her, and she reacts the same way that any of us would, with a puzzled look and a million questions. But Coulson might be onto something with that observation. Skye didn't react the same way that Coulson — and evil Hydra Agent Garrett — did when they were injected with GH-325. Skye's most definitely something other than human. Could Skye be part of the Kree?

First off, what exactly are the Kree? They are an alien race from the Marvel Universe, who are way more scientifically and technologically advanced than us mere humans. They look exactly like humans, except for the fact that they are blue. We've seen the Kree pop up on the show before, and after months of guessing and wild speculation, it was confirmed that all those blue people on S.H.I.E.L.D. were in fact Kree. We also saw the Kree this summer in the gigantic blockbuster Guardians of the Galaxy. So no, it wouldn't be entirely off base for Skye to be Kree herself.

"But she's not blue!" you say. I know that. But the Kree can out-lap us with their intelligence and technological developments, so somewhere along the line they could have genetically altered their blue skin, leaving Skye with the appearance of a human. There are also "pink-skinned" Kree, who resemble Caucasian humans. Forget about whatever color Skye's skin tone is, however, because her most important Kree connection is the GH-325.

Skye didn't react to it. She was injected with the serum, saved from death, and hasn't gone crazy since. She isn't drawing strange maps to secret cities all over the place. According to her evil Doctor Dad, she's going to be able to hold the obelisk whenever she comes in contact with it. Whether you want to call Skye part of the "chosen" or just highly evolved is up to you, but she's clearly something. It might be easier now to simply assume she's an alien, and try to figure out what kind of alien she might be.

Also, another interesting thing about female Kree is that they can manipulate the desires of men. While I personally would think that's a terrifying trait to have, Skye has exhibited some similar behavior before. Sometimes, she does appear to have Ward completely under her finger.

The idea of Inhumans joining S.H.I.E.L.D. has been discussed before, but the Kree have come up on conversation way more often. Instead of introducing a brand new alien race for the show, S.H.I.E.L.D. may stick to what it already knows. When Skye meets her dad for the firs time, their discussion on family history might involve a little lesson in Kree.