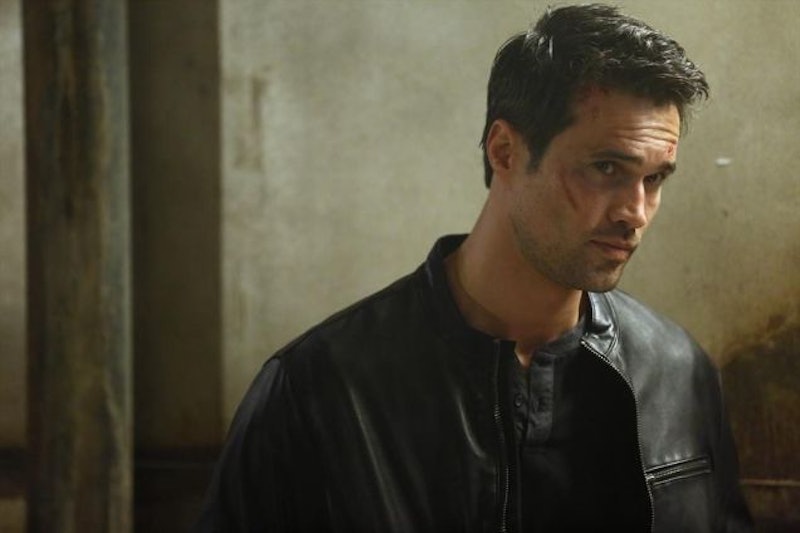 There are lots of adjectives we could use to describe Grant Ward on Agents of S.H.I.E.L.D. , like, "strong chiseled jaw" and "traitor," but could "sacrifice" be next? The signs for Ward to go rogue and align himself with Hydra were definitely there, but — just like Skye — we were all kind of distracted by him. And before there was time to stop him, he had completely turned to the darkside, and he might never come back. I like to think that there's still hope for him to return back to S.H.I.E.L.D., but as his body count grows higher, it seems less likely. And, if there's one thing we can learn from the Marvel Cinematic Universe, it's that the bad guys always get what's coming to them. Without sending him away to Asgard with Thor, could Ward die on Agents of S.H.I.E.L.D ?

I like to believe there's still a little glimmer of hope that Ward isn't all bad, inside and out. But he's done so many bad things — that of course include that one time he almost killed Fitz and Simmons. Simmons even straight up told him that if she ever sees him again, she's going to kill him. So, no, Ward can never really come waltzing back through the doors of S.H.I.E.L.D. and receive a warm welcome, unless he takes down all of Hydra and Daniel Whitehall's cronies leaving everyone else unscathed.

That's probably not going to happen, if only because there's still a second half of this season! And I bet that ABC is hoping for the show to continue all the way through Marvel's Phase 7, whenever that rolls out. So Hydra isn't going to be defeated anytime soon. Ward, however, could be defeated long before that.

What could stop Simmons from killing Ward herself? How about if next time, instead of trying to kill Fitz and Simmons, he sacrifices himself to save them? That would be something nice to do, and though it wouldn't necessarily be easy, it'd at least get him back in S.H.I.E.L.D.'s good graces, and maybe even remembered as a hero instead of a traitor. Ward is so far gone by now, there's not a whole lot he could do to ever redeem himself. The only viable option I see is if he finds himself and the Agents in a sticky situation, and in an effort to save all of them, takes a literal bullet for them.

Last we saw Ward, he was in the process of kidnapping Skye to bring her to her father, a promise he made to her a while ago. Skye's less than thrilled about this, obviously, and it's just another notch in Ward's evildoer belt. It's doubtful that he has good motives for this action, but maybe everything will click in his mind after he sees the torment that Skye is going through with the whole evil Doctor Dad thing. If he cares about her, which he seems to, and it comes down to getting her out of harms way or letting her die, I like to think that Ward really would be the good guy in that situation. Even if it means losing his life in the end.

I don't think any sort of ultimate sacrifice on his behalf will happen before the end of the midseason finale. But, it's something to think about as S.H.I.E.L.D. takes a break, and then heads into the back half of its season. There's got to be some good left in Ward somewhere, right? He has to prove it to everyone. And in doing so, it just might mean the end of him.