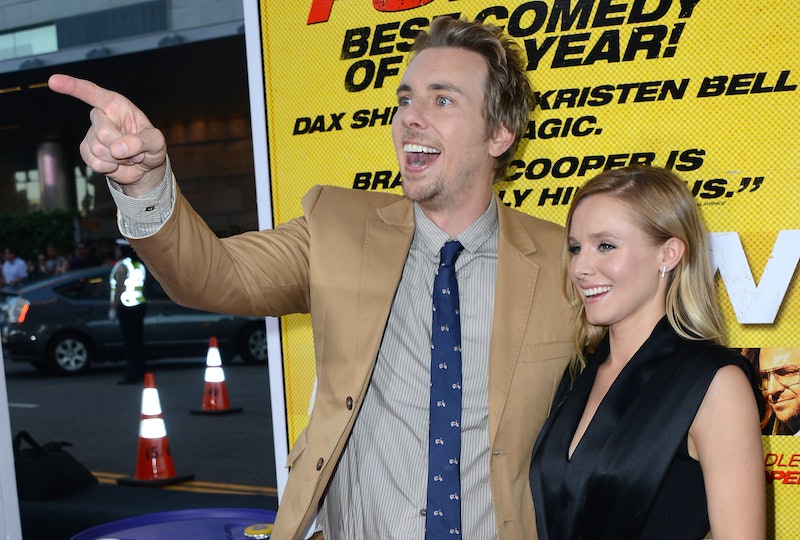 Kristen Bell and Dax Shepard have been keeping their title of "Most Adorable Hollywood Couple" very secure by just being themselves. While at first, the petite and bubbly Kristen Bell might seem like an odd match for the seemingly rough-around-the-edges Dax Shepard, their relationship is the ultimate proof that opposites do, indeed, attract and very hard, at that. So, I wonder, how did Dax Shepard and Kristen Bell meet and become one of the most in-love celebrity couples I've ever seen?

Well, as it turns out, their first meeting in 2007 was not all fireworks and butterflies.

In an interview in the December 2013 issue of Flare magazine, Bell admitted that their initial encounter at a birthday dinner party and was "not electric." Yes! There's hope for us all! She went on to say,

Two weeks later, I went to a Kings versus red Wings game — he was with someone I knew, and I was with my roommate, [Veronica Mars co-star] Ryan Hansen — and we ran into each other. It was on from that point.

Ah, OK, so I guess it was easy for them. Although their paths did seem to intersect, they're quite literally from different sides of the tracks. Shepard shared in an interview with Playboy,

Kristen's a good girl. She grew up very Christian, went straight to college, did great in school and started work immediately. She's charitable and philanthropic and rescues dogs. So when we met, our backgrounds were opposites. All the things I'd done were terrifying to her, and she had a hard time believing I would ever be able to stay married and monogamous and a father and all those things. For the first year and a half we were together that was what we battled over almost weekly."

The couple first started getting photographed together around November 2007, and by January 2008, they were spending New Years Day together in Miami, looking like a normal (and very happy) couple at the beginning of a relationship. In fact, since the first years of their courtship, neither of the actors have seemed to be able to shut up about how funny and happy they are together. Bell told Women's Health about their hand-holding meditation sessions, "We nauseate ourselves with how mushy we are." And Shepard once told Queen Latifah that his secret to nabbing Bell was he could "dance and make jokes." It sure did work!

Besides being totally in love and adorably cute, they are both from modest Michigan backgrounds and hold on to family values and strive to keep themselves as grounded as possible, which Bell told Flare was her secret to their successful marriage — a rarity in Hollywood:

Our main rule is: Check your ego at the door, and be aware of when the other person is spinning out. As artists, everything is vanity- and narcissism- driven: my career, the strategy behind it, the next level I want to hit, my photo shoot, how I was in my acting scene, my premiere. So we try to do a really good job of being human beings in the rest of our life.

Ugh they're so sweet I can't even take it. I'll just sit back and enjoy my singledom until I find something like they have, my real life. #relationshipgoals.