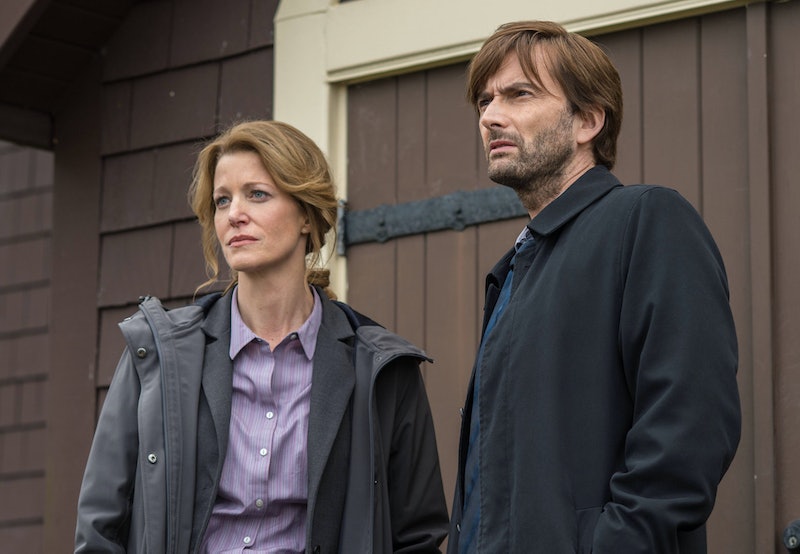 On Thursday, another series is coming to an end and this one stars Breaking Bad's Anna Gunn and Doctor Who's David Tennant as Detectives Ellie Miller and Emmett Carver, respectively. FOX's Broadchurch adaptation, aka Gracepoint, will close out its 10-episode run and all will finally be revealed, including the identity of Danny Solano's killer. There are so many disturbing and creepy individuals residing in the town of Gracepoint, it's been quite difficult to pinpoint the person who took the life of this 12-year-old boy. My guess? Ellie's husband, Joe (Josh Hamilton), but more on that later. Let's first answer those wondering if and Gracepoint could return.

First things first: Gracepoint was always meant to be an event series, similar to FOX's 24: Live Another Day and its upcoming Wayward Pines. As of right now, the series will only air its intended episodes, and I have a feeling that's all fans of the mystery drama will get to enjoy. There's been no word on a renewal, but that doesn't mean it won't come back to life — just look at Jack Bauer (Kiefer Sutherland).

With that said, and for those wanting Tennant (who also stars in Broadchurch ) back on their TV screen, I have an idea for a major story line for a potential Season 2. As we learned in Episode 9, Carver previously worked a case in Rosemont revolving around the disappearance of three young girls.

As he told reporters Owen and Kathy the detectives working the case found a pendant, which was going to be a key piece of evidence. The one detective who had it in her possession stopped for a drink at her hotel to celebrate. Unfortunately, her car was broken into and the pendant was stolen. Here's the kicker: that detective was Carver's wife, who was having an affair with another detective, and Carver, the good guy that he is, took the fall for his wife to protect her relationship with their daughter. He also wants Kathy and Owen to not reveal his wife's identity, but to tell the Rosemont families that he hasn't "given up on their daughters."

Now, if the Rosemont case isn't connected to the Gracepoint murder (anything is possible right?), wouldn't Carver, once again, investigating the Rosemont disappearances make for a perfect second season? If Carver continues working, depending on his heart condition, then this would be an opportunity for him to close the case that continues to haunt him. They could even rename the show Rosemont and broadcast it as another event series.

As for the Gracepoint killer, the show seems to be pointing all fingers at Vince, but I think that's much too easy. Like I stated above, my money's on Ellie's hubby. First, no one really suspects him. Second, he seems much too calm about Danny's death. Third, and as we saw Ellie ask Joe at the end of last week's episode: "What do you do all day?" Yes, he's a stay-at-home dad, which is a tasking job, but what does he do? Also, it would make sense, especially since their son Tom is clearly hiding something. Maybe he's trying to protect his dad? Lastly, Ellie's family still remains somewhat mysterious, so this would surely make one killer twist.

The Gracepoint finale airs Thursday, Dec. 11 at 9 p.m. ET on FOX, and it may be the last time we see Anna Gunn and David Tennant acting side by side, so soak it up, folks.

More like this
'Heartstopper' S2 Just Welcomed Four Brand New Cast Members
By Nola Ojomu and Sam Ramsden
Nicola Coughlan Shared A Lady Whistledown Excerpt From ‘Bridgerton’ Season 3
By Grace Wehniainen, Alyssa Lapid and Sam Ramsden
If 'Entergalactic' Season 2 Happens, You Could Get A New Kid Cudi Album
By Kadin Burnett
'Ramy' Will “Probably” End With Season 4, According To Ramy Youssef
By Brad Witter
Get Even More From Bustle — Sign Up For The Newsletter