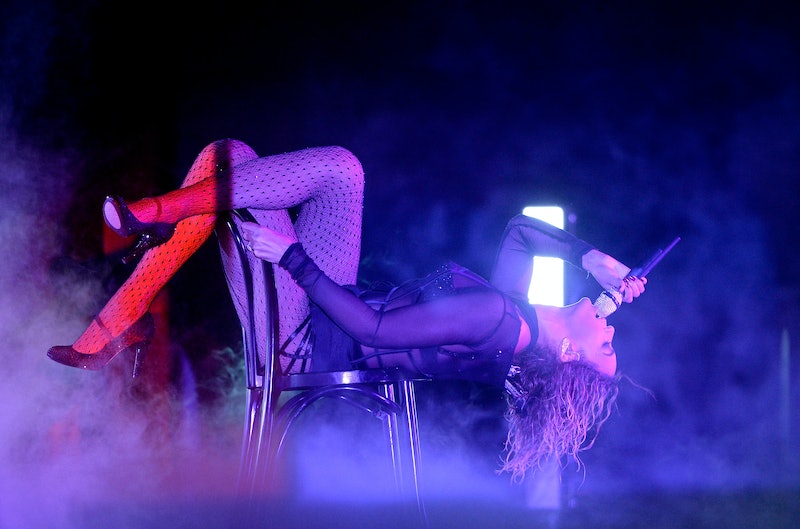 Everywhere she goes, Queen Bey makes headlines, so it's no surprise that Beyoncé was named Facebook's most talked-about entertainer of 2014 After releasing a surprise self-titled album at the end of 2013, she took this year by storm with sexy performances at the Grammys and VMAs, more surprises with her sister and husband's post-Met Gala elevator fight, amazing new music and videos, and a huge world tour. That's just naming a handful of times that she sparked conversation on social media — every day, people are talking about her latest fashion (including fabulous items in her own store), how adorable Blue Ivy is, and why we should all bow down. Let's face it: we all know who runs the world.

As we head toward the end of the year, let's relive 11 of her best moments, a.k.a. why she was obviously the most talked-about entertainer, and will continue to be for years to come. Although most of these are about her professional career, her love life and newfound friendships (hello, Will and Kate) are also of the utmost importance. Basically, everything she does is worth talking about, so it's about time she and Jay Z get their own reality show.

When Beyoncé and Jay Z performed "Drunk in Love" at the Grammy Awards, it was ridiculously hot. A runner-up for sex appeal was Bey and that chair.

The Elevator Fight (And the Aftermath)

After the Met Gala in May, Beyoncé's sister, Solange Knowles, reportedly attacked Jay Z in an elevator. Bey subtly addressed the situation with sweet family photos on Instagram before they all released a statement about how they've "moved forward" after the incident.

The best follow-up to the elevator incident was the "Flawless" remix with Nicki Minaj. "We escalate, up in this b*tch like elevators, of course sometimes sh*t go down when there’s billion dollars on an elevator," Beyoncé sings. Now that's flawless.

Throughout the year, there were many breakup rumors about Beyoncé and Jay Z, particularly about them getting divorced. But here we are, almost in 2015, and they're still together.

On the Run Tour

Not only did Bey and Jay embark on world tour together, but they got their own HBO special, On the Run Tour , after it ended.

Bey's 16-minute performance at the 2014 VMAs was impressive because she sang for that long, but it also had an important feminist message throughout. She also gave a sweet speech with Jay Z and Blue Ivy by her side while accepting the Michael Jackson Video Vanguard Award.

Bey got bangs in October and not everyone was feelin' it. Her baby bangs were this year's version of her pixie cut — girl knows how to get people talking about her hair.

The Fifty Shades of Grey trailer was viewed millions of times and featured a slowed down, sexy version of "Crazy in Love." She also got to debut a snippet of the trailer on her Instagram, because, obviously.

Bey was on the cover of TIME magazine's "The 100 Most Influential People In the World" issue, proving that she really does run the world.

If you ever wanted to know what Beyoncé does around the house, just watch the amazing "7/11" video. It was basically a home video, featuring her dancing around in her underwear on a balcony, being a cheerleader in the bathroom, and making Christmas come early.

This one just happened, but it's very important. At the Barclays Center in Brooklyn on Monday night, Beyoncé and Jay Z met Kate Middleton and Prince William. It was when music royalty met real royalty, and it was incredible.

More like this
Everything To Know About Taylor Swift’s 10th Studio Album, 'Midnights'
By Grace Wehniainen and Jake Viswanath
The Prince William & Rose Hanbury Rumours, Explained
By Frances Stewart and Sam Ramsden
8 Photos Of Prince George & Princess Charlotte At Queen Elizabeth II's Funeral
By Jake Viswanath
The Difference Between The Royal "Institution" & "The Firm" Shows Who's Really In Charge
By Savannah Walsh and Meguire Hennes
Get Even More From Bustle — Sign Up For The Newsletter