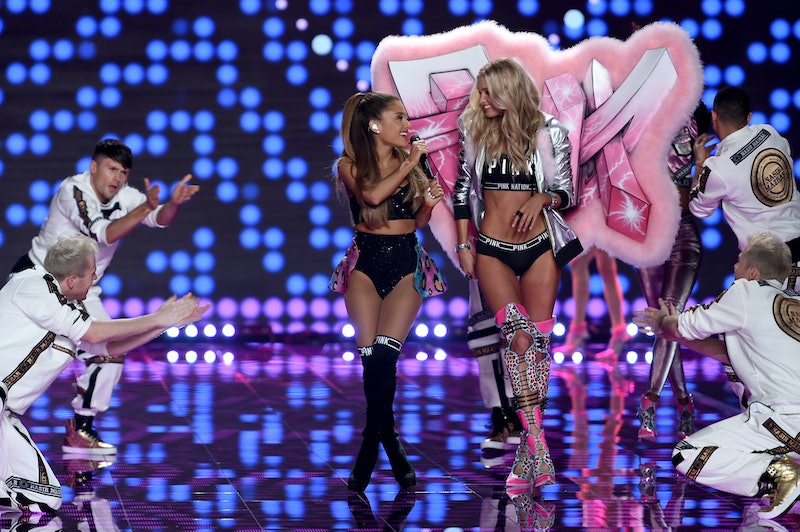 When you only show one side of your face, you have to be protective of it. Ariana Grande's performance at the 2014 Victoria's Secret Fashion Show was hijacked by the meme of her startled face as she cringed from getting hit from behind. We all assumed that would be the main takeaway from her performance. But surprisingly? The song was great! She performed a combination of "Love Me Harder," "Bang Bang," "Break Free," and "Problem" with the help of some backup dancers and a candy-colored collection of Victoria's Secret models. In a contrast to Ed Sheeran's soft, intimate ballad, Grande's performance was all about strutting across the stage, interacting with the models, and playfully acting out all the emotions in the songs.

And even though CBS cut around it as much as possible, in the background we got to see exactly what happened to provoke that epic face in motion — model Elsa Hosk, strutting down the catwalk just a hair too far to the right, ended up clipping Grande in the back of the head with her bright punk wings. Grande, to her credit, was able to continue the song with little interruption, and Hosk kept strutting like nothing had happened at all.

Ariana Grande's performance at the awards was a lot more lively than I was expecting. I won't say I thought it would be bad, par se, but she's not always the most naturalistic live performer. Her sets at the MTV VMAs, for example, were awkward, and even in the music videos for "Break Free" and "Problem," she seems uncomfortable being sexy and dancing provocatively. Usually, live performances aren't her strongest suit. But Ariana was so relaxed tonight, from how quickly she bounced back from getting smacked to how easily she was able to showcase her (great) voice, dance, and look like she wasn't having a miserable time. She even told Ed Sheeran a dirty joke! Might Ariana Grande actually have… killed it? I think she totally did.

I guess all it took was being onstage with a bunch of people in their underwear to kill her stage fright. From now on, Ariana Grande should only perform at pool parties, Coachella, and future Victoria's Secret Fashion Shows. Who knows, maybe in a few years she'll pull a full Swift and start calling the shots on what models get to walk… Elsa Hosk, your days may be numbered.

More like this
'Selling Sunset's Vanessa Married Her British Beau Nick In A “Fairytale” Wedding
By Darshita Goyal
Everything To Know About Taylor Swift’s 10th Studio Album, 'Midnights'
By Grace Wehniainen and Jake Viswanath
Twitter Is Freaking Out Over Rihanna’s 2023 Super Bowl Halftime Show Announcement
By Stephanie Topacio Long
The Spice Girls Just Dropped A Brand New Music Video
By Sam Ramsden
Get Even More From Bustle — Sign Up For The Newsletter