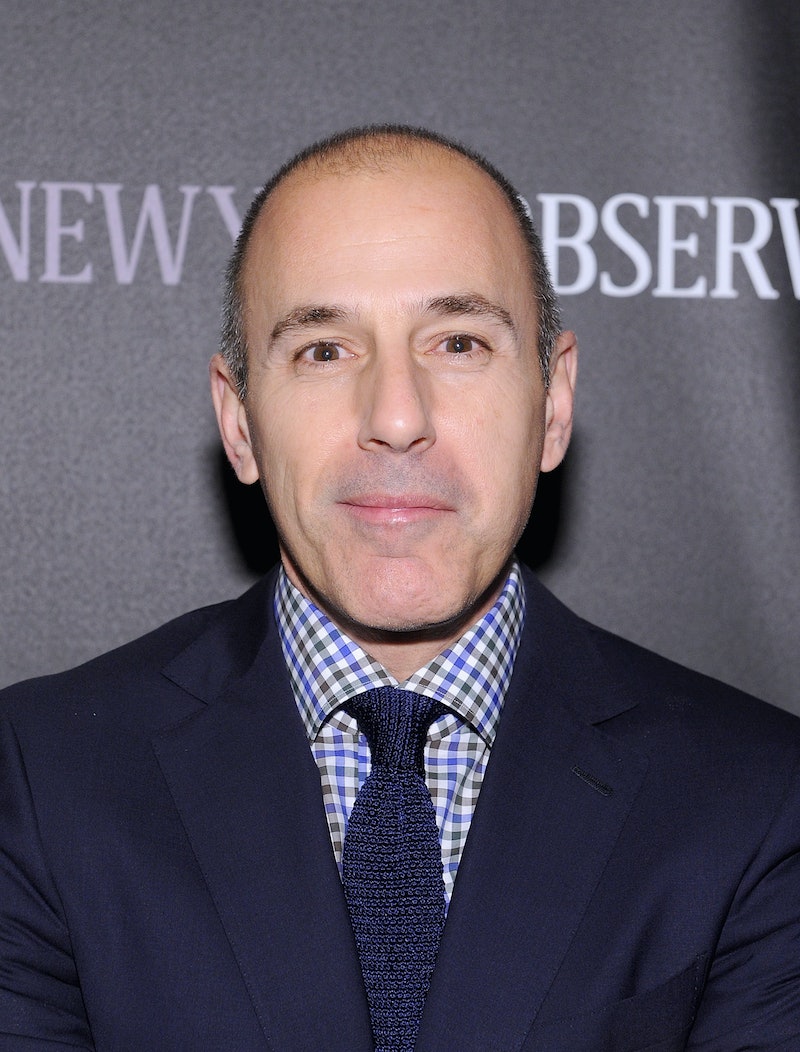 Let me preface this by saying that I really, really want to like Matt Lauer. I do. I grew up with the Today show playing while I ate breakfast before school, and honestly, he seems like a nice enough dude. But his interviewing skills? They leave a little something to be desired, because as soon as a woman takes the chair across from him, he seems to lose all sense of the notion that women are more than walking, talking child bearing machines who are susceptible to life ruining wardrobe malfunctions. His latest cringeworthy interview? When Matt Lauer talked to Carrie Underwood and sidelined all of her recent career accomplishments in favor of discussing her impending motherhood. Yeah. That really happened.

When Underwood appeared on Today Tuesday morning, Lauer kicked off the interview in the most uncomfortable way... even though he previously spent an entire minute-long introduction listing her many achievements.

"All the career stuff, all the Grammys... that's kind of secondary," he said. "Because what's more important is what's going on right here."

And then he gestured to her stomach. Because, apparently, despite the fact that Underwood is one of the highest selling acts of her time, all of that becomes irrelevant at the point of her baby's conception. Again, Lauer, I want to like you, but right now, I kind of just want to throw things at you. And here's the thing: Most mothers would tell you that their careers are nothing compared to the love they have for their children, but that's not the point. The point is that anyone who is a mother — even someone whose primary job is being a mother — does not have her identity reduced to "mom" as soon as her baby is born. Mothers are mothers, but they're also people, and I wish it was clear that Lauer understood that.

This wouldn't be nearly as rage-inducing if it was the first time that Lauer was guilty of this sexist behavior in an interview, but this has happened many times before. If you want something to be utterly pissed at today, keep reading. If you want to continue enjoying Lauer's "Where in the World" segment, maybe you should click to another article and enjoy some blissful ignorance.

I am not the biggest fan of Sarah Palin or her political ideals, but since I have never run for vice president or been elected the governor of an entire state before, I can respect her for those accomplishments. Unfortunately, Lauer isn't in that camp, and instead of talking about things like, you know, what it's like to be in charge of Alaska, he just kept turning the conversation back to the drama with her daughter. Ugh.

Lauer sits down to chat with the CEO of GM — AKA the first woman who's been a CEO in the automotive industry — and he wants to know how she could possibly manage balancing motherhood with her job, after hinting that she'd gotten the job because she was a woman and a mother, and GM was looking for a "softer face" to be the figurehead of their company. I'm sorry, what?

You probably remember this one, but it's totally worth mentioning. Anne Hathaway is on the Today show to discuss her role in the wildly popular movie musical, Les Miserables, and Lauer's first question is about how she's handling a recent wardrobe malfunction. Fortunately, Hathaway is far more graceful in her response than I would have been:

Please let me grow up to be Anne Hathaway. Amen.

Bustle has reached out to Matt Lauer's rep for comment.

More like this
At 28, Melanie C Was Falling In Love & Reclaiming Her Confidence
By Olivia-Anne Cleary
Liz Truss Is Being Compared To A Controversial Emma Thompson Character
By Sophie McEvoy
Mel C Wants You To Know That Margaret Thatcher Wasn’t A Spice Girl
By Darshita Goyal
Romance Authors Are Mobilizing For Reproductive Rights
By Natalia Perez-Gonzalez
Get Even More From Bustle — Sign Up For The Newsletter