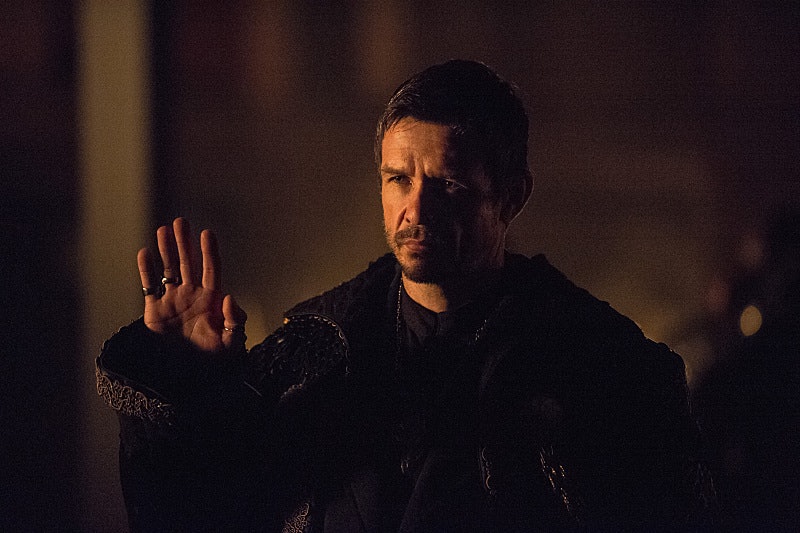 It has been months since Sara Lance's death on Arrow and yet her mysterious killer continues to walk free. Sure, there's been a great deal of speculation surrounding the crime and the team's made a few baby steps in the right direction (we can officially cross Roy Harper off the suspect list). But aside from that, we've remained just as clueless as we were during the Season 3 premiere. And I don't know about you guys, but my patience is starting to wear thin. It's time we know once and for all: did Ra's al Ghul kill Sara Lance? A question that Arrow 's midseason finale episode "The Climb" will hopefully answer at long last.

I know I've gone back and forth on the matter myself, initially assuming that such a professional-type hit had to be the work of League of Assassins leader Ra's al Ghul. However, now I'm starting to think that neither he nor the League had anything to do with it at all. As for what's inspired this change of heart? Well, for starters, it simply seems a bit too obvious at this point. Like I've said numerous times before, this CW series loves its surprise twists, so making the killer be one of the main adversaries fans expected all along feels a little too on the nose. Like if someone were to come out and tell me that Ra's al Ghul killed Sara, I wouldn't be shocked in the least. And that's just not Arrow's style.

Then there's the fact that Wednesday's episode synopsis states that Ra's al Ghul will give Oliver a 48-hour deadline to find Sara's killer, and if he fails, then the League of Assassins will start killing the citizens of Starling City. (You know, because it isn't a proper Arrow episode unless thousands of lives hang in the balance.) But the key takeaway from this should be that while Ra's clearly has no reservations about taking a human life, his interest in Sara's killer seems to indicate that he truly was not behind the attack. I mean, why make such a big deal over it if he (or one of his followers) was the culprit? It just wouldn't make any sense. If anything, he'd want to distract Oliver from finding out the truth, not motivating him with death threats.

Sure, I guess there's always a chance that Ra's is simply messing with Oliver's mind and wants him to discover the truth so they can have a proper shirtless showdown (see above) once and for all. But that seems pretty unlikely. No, I think Sara's murderer is someone we know. Not a faceless assassin or a man we've only caught brief glances of. If I know Arrow, odds are it'll be a reveal that shocks us to our very core (though I think we can safely rule out both Felicity and Diggle because that would be too crazy).

But Thea, Malcolm, Wildcat, Amanda Waller, Ray Palmer — they're all up for grabs. Heck, right now I wouldn't even rule out the possibility of Slade Wilson somehow being involved. Sure, he's currently taking up residence in a super-max A.R.G.U.S. prison, but I wouldn't put it past this character to have somehow found a way around that. It's also worth noting that Manu Bennett, who plays Slade, is scheduled to return to the series during Episode 14 of this season, according to his IMDB page. Just sayin… on a show like this, anything is possible, which makes me more sure than ever that Ra's al Ghul is not the droid, I mean, man we're looking for.