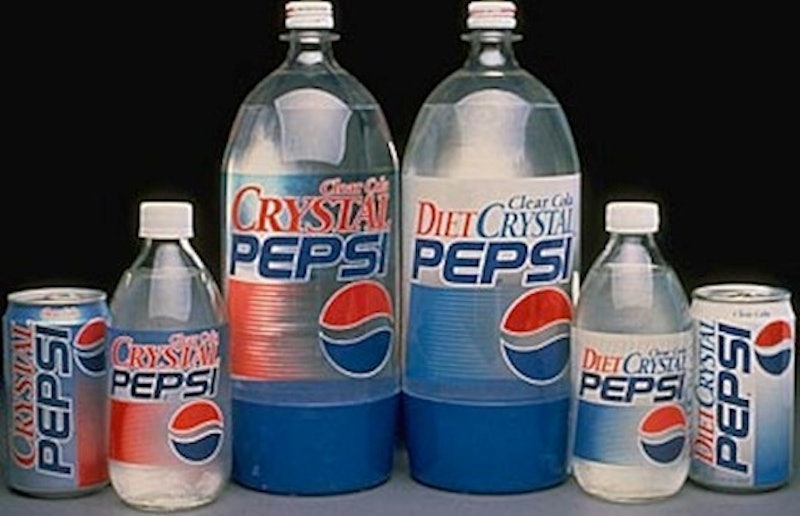 Whenever a discontinued food is given a second chance at life, like the recently reborn French Toast Crunch, I pause in whatever I am doing to twirl in place in celebration. Because I get easily dizzy, I usually then fall over, bruise a butt cheek and curse for a while. Once that stage of the process is done (yeah, it's a process, a veritable ritual) I then proceed down to the secret basement vault where I keep my ancient scrolls, scour the druidic runes written there, and cast incantations in the hopes that some of my other long-discontinued favorites will be the next treats summoned and returned to the shelves of my local grocery store.

In case that was any way unclear: I take my snack foods seriously. I approach vegetables with visible hostility. When raw green juice became a thing, I was delighted. That's not because I was psyched about having yet another way to ingest greens, but rather because that going the juice route would give my jaw a much needed rest as it saved up its powers for chewing things like Jujubees and Lemonheads. With that in mind, here are 12 discontinued foods that need to come back already (I'm especially looking at you, Shark Bites!)

I was a huge fan of eating these cookies—tiny kangaroos that you dip in a packet of frosting—while speaking in an Australian accent much like Dick Van Dyke in the seminal classic Mary Poppins. I resent that simply eating spoonfuls of prepared frosting from a can is considered “monstrous” but portioning it out to children as a perfect lunchtime snack? Sure, totally, no big thing. The times, as Uncle Bob once said, they are a-changin’.

As a person who has been known to rationalize the giant, unfrosted cake that is a “chocolate muffin” as a perfectly acceptable breakfast food, it should come as no surprise that I was all about this cereal which was essentially just, you know, Oreos. In a bowl. Gone but not forgotten. One of my brothers copes with this loss by crushing up Oreos, putting them in a bowl and covering them in milk before going to town. He is a genius.

There should have been something deeply disturbing and creepy about a cookie that smiles up at you while you eat it, but there totally wasn’t. As a kid, I used to anthropomorphize all my food. (I can’t tell you the number of Teddy Grahams who wound up walking the milk-plank, or having their heads cut off.) I used to savor these Oreo wannabes while sneering, “That’s right—laugh! LAUGH ALL THE WAY TO YOUR GRAVE.” I was a pleasure to know as a child. This continues to be the case.

I get that kids are picky eaters, but has ketchup ever been something parents were actively concerned about their spawn refusing to eat? To the point that, like, a whole new product needed to be created to cloak its true color? Whatever the reasoning behind the creation of this bizarre ketchup, I miss it! Sure, as a young adult I’d squirt it on my burgers and become vaguely unsettled, but that was part of the fun!

Oh my god. The hours of my life spent craving the Great White Shark flavor of Shark Bites! I never thought I would end up spending my adult years pining for the matte finish of a gummy shark, yearning to glut my body with tropical fruit-flavored goodies. Fruit snacks are the greatest things ever. Fruit snacks you can eat while humming the Jaws theme? They are awesomeness incarnate.

Ahh, BarNone bars! GAH! I think this may have been the very first candy bar I ate as a child. In other words, it was my gateway candy bar. I don’t have confirmation that this happened, but I’m pretty sure I bit into one and then was found three weeks later, blacked out in an alley, surrounded by foils wrappers, a ring of chocolate around my mouth. I was all about this treat and its cocoa wafer goodness. Also, for some reason, I associated it with cowboys and I'm not. mad. about it.

Coffee meets Coca-Cola meets "me throwing up on the side on the road after being in the car for any longer than twenty minutes." I don’t actively miss this abomination, but I miss it theoretically. If there were, in fact, a way to blend the tastiness of cola with the tastiness of coffee, I might never stop drinking it and would thus have to be rolled hither and yon, my rotting teeth popping out and flicking errant school children in the face as I went. Let that be a lesson to us all.

Whenever I’d go to my grandmother's house as a kid in the summer, she’d pour herself a gin and tonic, and me a glass of Crystal Pepsi. We’d sit on the porch together where I’d listen to her gossip her ass off in that particularly Old Southern Lady way (“bless her heart” was often said) and pretend that I was a grown-up. I wasn’t old enough to understand that the marketing campaign for this beverage was based around implying that the clearer the soda was the better for you (because, you know, science) but to me that stuff was magic. “If you close your eyes, you wouldn’t even know it was clear!” I was often quoted as saying. I was a special child.

I’ll be real: I didn’t even know that these tasty morsels had been discontinued! Arguably, you could just chop up a regular Butterfinger and, using the heat from your hands, roll them into little bite-sized balls, but I can’t think of a better way to make yourself feel like a dung-beetle. And, unless that’s what you’re into, I think it’s safe to say we’ll all give that a pass. I loved BBs! They were like regular Butterfingers only Bart Simpson approved.

A guy I dated once told me that the first time he got drunk, it was by mixing random bevs from a friend’s parents’ liquor cabinet with a bunch of Ecto-Cooler and drinking it out of a pan. While my own experiences with the Ghostbusters tie-in “juice” beverage were not nearly so badass (if drinking from a pan could ever be given the label of “badass”) or strange, there is no denying that this artificial but sumptuous beverage left you wanting more. Also, left you with a desire to chase and bust ghosts. Go figure.

If someone were to walk into my apartment right now with a plate of fresh Magic Middles, formerly produced by those sassy elves at Keebler, I’d distend my jaw, inhale the plate in under a minute, and then promptly mount their leg in a show of gratitude. There are a lot of recipes on the web that claim to imitate their splendor. These recipes are offensive and hurtful to my soul—Nothing can ever rival the sheer splendor of these soft morsels with their melt-away chocolate insides. *cue pleasure shudder*

More like this
Andie From 'How To Lose A Guy In 10 Days' Is A Total Gemini
By Nina Kahn
12 Aphrodisiac Desserts To Spice Up Your Valentine’s Day
By Kaitlyn Wylde
15 Black-Owned Liquor & Wine Brands To Add To Your Bar Cart
By Alexis Morillo
16 Trader Joe's Appetizers That Are Total Party-Pleasers
By Kaitlyn Wylde
Get Even More From Bustle — Sign Up For The Newsletter
From hair trends to relationship advice, our daily newsletter has everything you need to sound like a person who’s on TikTok, even if you aren’t.