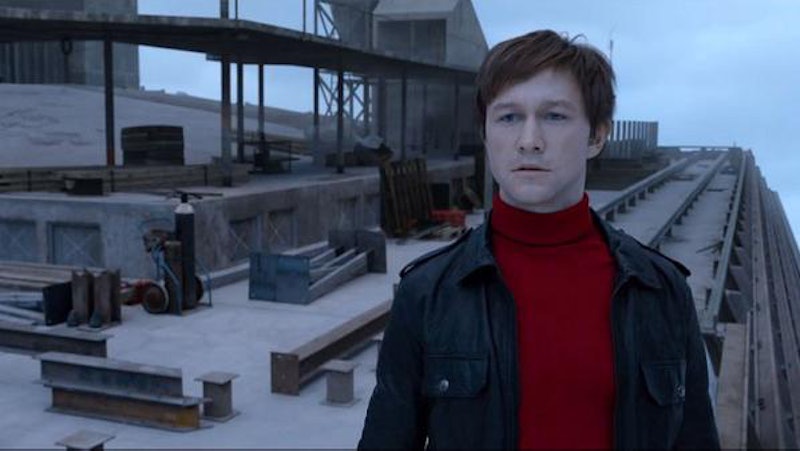 Though it won't be released until October of 2015, on Tuesday, a beautiful new trailer for Joseph Gordon-Levitt's The Walk debuted on Tuesday. If you're wondering if The Walk is based on a true story, it definitely is — one of the most bizarre and daring. Levitt plays Frenchman Philippe Petit, the world famous trapeze artist and aerialist that has tightroped his way across a number of incredibly huge monuments, including the Sydney Opera House. The Walk is the harrowing story of the illegal mission to tight rope between the towers of the World Trade Center that Petit and his coconspirators performed in 1974. Petit then walked the high wire between the north and south towers eight times on August 7th when he was only 24 years old.

The story is very much thrilling and very much real. In fact, The Walk, directed by Robert Zemeckis, is not the first film to be made about Petit. There was, of course, the beautiful documentary Man On Wire in 2008, which was based on Petit's book about his feat To Reach the Clouds. Man On Wire is one of the most acclaimed documentaries of the 2000s and perhaps of all time, and it earned the Academy Award for Best Documentary Feature in 2008.

Full disclosure: I love the documentary Man On Wire. To me, it is an undeniable affirmation of life and the tenacity of the human spirit, and I say this as a noted pessimist. The true story of Phillipe Petit deserves to be made into this film. Before he walked across the 110-story Twin Towers, Petit high-wired the Notre Dame Cathedral and the Sydney Opera House. As "punishment" for his illegal walking of the Twin Towers, he was contracted by the city of New York to perform for children in Central Park, and later became one of the artists in residence at Harlem's Cathedral of St. John the Divine in New York City.

I can understand, though, why people, including Bustle's Rachel Semigran, would find the trailer unnerving not just for the drop in the pit of your stomach when you see Joseph Gordon-Levitt walk out on to a short high beam jutting out from the top of one of the towers. There is of course the presence of the towers themselves, which, 13 years after the tragedy, still evoke pain and tremendous grief. But I have high hopes that the story will be more about Petit's relationship with the towers and the inspiration they strengthened him with. The real Petit himself is full of a sense of wonder and optimism. In an interview earlier this year with The Guardian, Petit reminisced about how he felt on August 7, 1974. When asked if he doubted himself:

He is humble and human and describes himself as an impulsive spirit. The interviewer asked him how he felt when he saw the towers fall on the morning of September 11th, and he gave a measured and lovely response; "What I felt, I cannot really share with the outside world. It was an intimate relationship. How can I talk about losing those towers when that day, thousands of lives were lost? I cannot compare it. But those towers were human for me." It's this element of humanity and compassion of the real Petit that gives me hope that the movie will focus, instead of destruction, on the sense of incredible possibility of realizing dreams.

More like this
Is 'The Woman King' Based On A True Story? The Female Agojie Warriors Did Exist
By Radhika Menon
Two UK Cities Are Now In The Running To Host Eurovision 2023
By Sam Ramsden and Rachel Mantock
The Queen’s Beloved Corgis Played A Special Role At Her Windsor Service
By El Hunt
Why Princess Anne Will Remain Princess Royal For Years To Come
By Sophie McEvoy
Get Even More From Bustle — Sign Up For The Newsletter