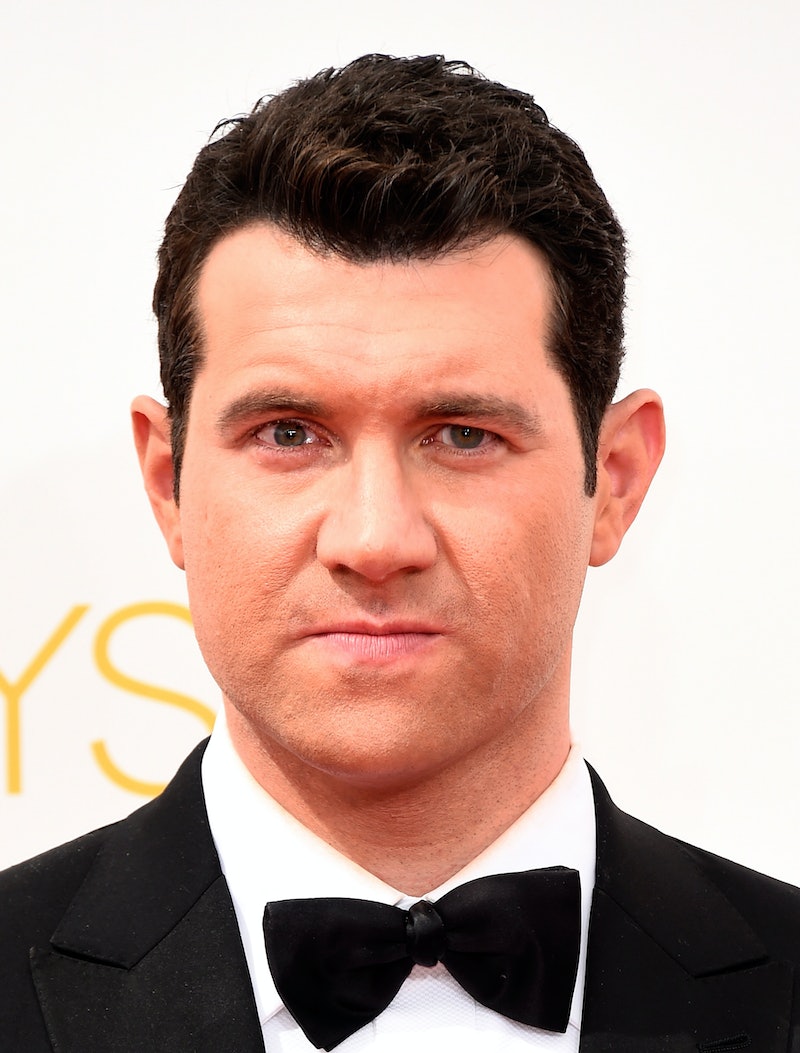 With Taylor Swift going on her ninth month as a New Yorker, it's high time she learned about gentrification. In an interview this week, Billy Eichner said he wanted to show Taylor Swift the real New York by leaving her on the Staten Island Ferry. Then together, they'd turn the experience into an album about coming of age, coming into your own, and trying desperately to find the Metrocard buried in your purse.

Vulture's Jessica Goldstein sat down with the comedian to talk about his guest role on The New Girl (airing Tuesday night), what shows he's watching, what it was like to meet Meryl Streep. They eventually got on the topic of Taylor Swift, and Goldstein suggested that Eichner hang around Swift's Tribeca apartment in hopes of getting her on the show. Eichner responded with an idea for potentially the best Billy on the Street segment since the "Mo'Lympics." After singing a duet of his spot-on Swift parody "Glitter and Ribs" with Tay-Tay, he'd give the "Welcome to New York" singer a tour of outer-borough New York. He said:

I’m taking her to the Bronx, to Spanish Harlem. I’m taking her to the depths of Queens, where I grew up, and I’m going to show her what it’s really like. I’ll bring her on the Staten Island Ferry and leave her there. Then we’ll write a whole album about it. It’ll mostly be about how she met someone on the Staten Island Ferry and it didn’t work out. And I’m like, “It’s only 20 minutes, Taylor, what did you expect?” But on the ferry, you pass the Statue of Liberty, so if she could get into women, there’s that option for her.

Just imagine: Swift taking shots of vodka with the Russians in Brighton Beach. Swift shopping for Chinese groceries in Flushing. Billy Eichner can make it happen!

Come to think of it, "Pop Star Tour Guide" would be a fantastic idea for a Billy on the Street segment. Here are just a few suggestions for other famous non-native New Yorkers who Billy could take on some gritty, realistic Big Apple tours.

Grande was a Broadway performer in her childhood, but something tells me she rarely made it into the city's seedy underbelly. I'd give my left kidney to see Eichner take Grande on a tour of famous organized crime landmarks in Brooklyn and Staten Island.

What better way to acquaint this band of British boys with a bustling city like New York than to bring them to a local community board meeting? They can learn about how much arguing goes into a new business securing a liquor license. Fun and educational!

A great summertime segment would be for Eichner to have Gomez tag along with him to the McCarren Park Pool in Brooklyn. By swimming in an ocean-sized pool teeming with bodies on some of the hottest days of the year, Gomez could really soak up some local flavor.

I'd love to see Eichner take Bieber on a local news-style tour of the city's worst potholes. A) To see the unfairness of how certain neighborhoods are allocated less city money, and B) to remind him that drag-racing is dangerous.