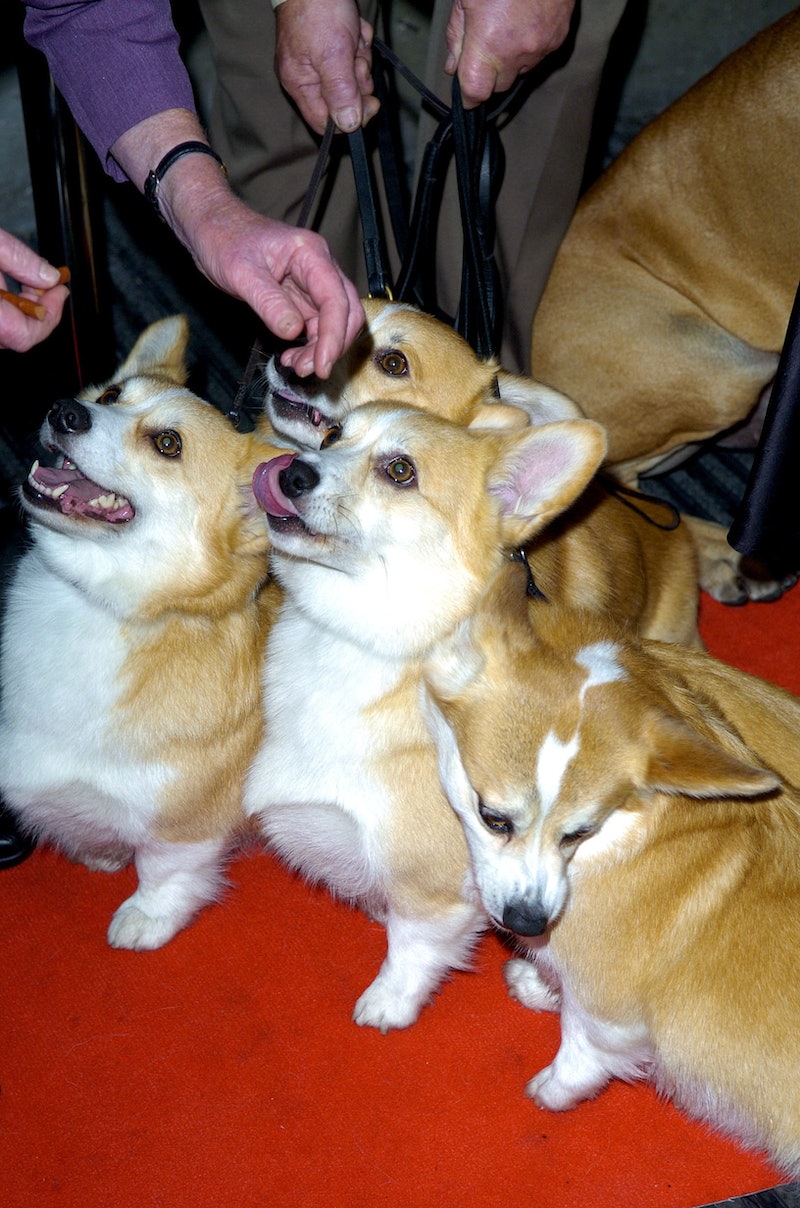 A bride-to-be in Boston needs to immediately invite me to her wedding. This is not, however, because I enjoy large social gatherings where I must interact with strangers, but because the bride wants her bridesmaids to carry corgis instead of bouquets of flowers. She is clearly the greatest person on the planet and I must meet/befriend her immediately. This is a not a drill, you guys. This woman penned a well-written, earnest, and vaguely insane post to Craiglist seeking six corgis to participate in her wedding as sort of barking bouquets. Don't worry: She's already got a few corgis and just needs a few more. Youu know, to complete the set. Corgis at weddings are the new Pokémon: Gotta catch 'em all.

I think the concept of the "bridezilla" has now officially gone full-circle: Brides now are expected to desire excess. So it's like if you aren't demanding that strangers loan their dogs with cake as the only payment, you're the odd woman out. Every woman who gets married apparently is now fully expected to turn into Marie Antoinette. When I get married, I am going to hire someone to quietly eat chocolate until they literally explode gloriously in front of everyone. Hey, gotta give me what I want, I'm the briiiiide! Oh, and all of that needs to happen while Pitbull sings live because it's all about presentation.

If you're still looking for a way to up your nuptial ante, I've come up with 10 other creative, non-bouquet options for the bridesmaids in your party.

If your bridal party stands behind you and the groom hitting the floor with their razor-sharpened spears, you can be almost certain of preventing both cold feet, and outbursts from overly dramatic exes. It would be like having your own security team which is way more practical for modern brides.

Do you guys watch Hannibal? Maybe it's just me, but I'm super into serial killer–based dramas. Anyway, this season, one of the villains sustains himself by drinking human tears, and I think he's onto something we can use for special occasions. Maybe the bridesmaids could acquire the tears men or women who previously wronged the bride in past relationships. What better way to toast your new union than by knocking back the salty proof that your days of breaking hearts and taking names are behind you?

It is a fact commonly known that weddings inspire folks to bump uglies at their earliest, drunken convenience. Be a good and proactive host: Have your bridesmaids hurl contraceptives at guests!

Records the Bride and Groom Have Banged To

LPs are so hot right now! Take a walk down memory lane while you walk down the aisle. Plus, this could serve as the perfect reminder to those gathered that there's nothing you can't do while listening to the Carpenters.

Corgis: What's so great about them anyway? They are dopey and smily and fat like little breakfast sausages. Corgis are sweet, I guess, but if you really want to get a party going? Have your screaming bridal party rush down the aisle while trying to keep feral cats from scratching their faces.

A good way to treat all the women whose lives you've admittedly made a little hellish by asking them to be a bridesmaid: Instead of bouquets, get them small, tiered cakes that they can eat with their hands as they walk during the ceremony!

You know what would be genius? Making your bridesmaids memorize the entire catalog of the Shirelles greatest hits and forcing them to sing during your entire ceremony, crooning into bedazzled mics! I am only half-joking about this.

For a Sex and the City vibe, give each of your bridesmaids an entire bottle of wine with which to sashay down the aisle. First bridesmaid to announce that she is "totally the Carrie" loses the game.

If your bridesmaids are a little concerned that they might not ever meet that special someone, give them the gift that keeps on giving: a solid gold bar! Not only will this highlight your tremendous wealth and make you seem very generous, it might also leave folks wondering if you fiancé is some sort of Bond villain. Always a plus.

If you're anything like me, Vikings have always held a special place in your heart. Celebrate this fun passion by enlisting your bridesmaids to carry torches to your wedding. Once you've said " I do," they can go off to plunder the suburb of their choosing and eventually burn it to the ground. Super festive fun!

More like this
16 Valentine’s Day Quotes About Chocolate That Will Make You Hungry
By Emma Cueto
21 Galentine’s Day Memes To Celebrate Your Best Friends
By Meghan Bassett and Mia Mercado
23 Super Sweet Things To Write In A Valentine's Day Card
By Karen Belz and Lexi Inks
Here’s What TikTok's "Mascara” Trend Is *Really* About
By El Hunt
Get Even More From Bustle — Sign Up For The Newsletter
From hair trends to relationship advice, our daily newsletter has everything you need to sound like a person who’s on TikTok, even if you aren’t.