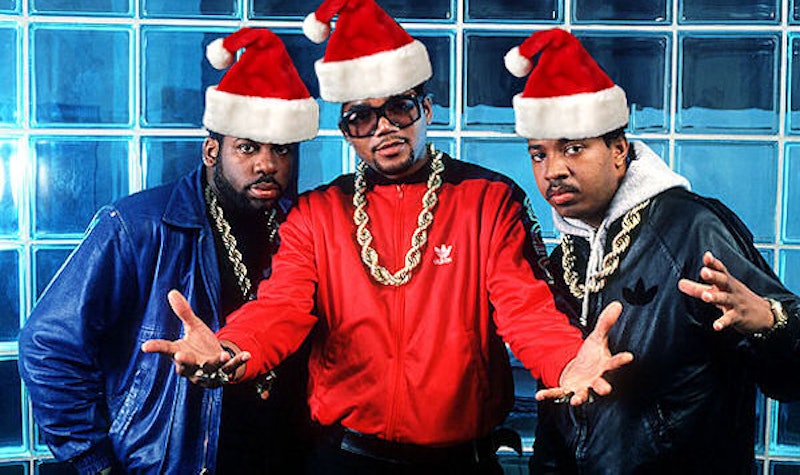 It's that special time of year again — you know, that time when you know that if you have to hear one more annoying Christmas song, you will finally slip free from the chains of sanity, and run amok through a holiday candy display ay CVS. Yeah, sure the holidays are also about presents and gingerbread houses and cartoon TV specials and your family or something — but everyone knows that the real soul of Christmas is the struggle to avoid listening to horrible Christmas music. Which is difficult, because for some reason, it is everywhere.

Can't we do better than this? We have tiny computers in our pockets, and yet you're trying to tell me we can't come up with a better idea for a Christmas song than "Little Drummer Boy?" And do not even get me started on "Baby, It's Cold Outside" unless you want to be here for, like, the next six hours. The vast majority of holiday standards are like a waking, peppermint-flavored nightmare.

Luckily, there's a wide world out there of Christmas songs that don't involve creepy sexual come-ons directed at Santa Claus, the phrase "pa-rum-pa-pum-pum," or listening to Mariah hit the high notes. The 11 songs below represent just a taste of the many contemporary Christmas songs out there that rock, roll, and were not featured on the soundtrack to Home Alone. Give them a shot at your next holiday party, and leave "Rockin' Around the Christmas Tree" to those weird dancing Santa robots. They deserve it!

These '80s rap pioneers spin a pretty traditional tale of meeting Santa, being reimbursed for their kindness with presents, and then eating some carbs to celebrate — but at least they do it to a backing track filled with hot horn vamps, which immediately places them about 70 steps ahead of Bing Crosby.

What's Christmas really about? The filthy lucre, of course! Let the British rock geniuses behind "Lola" break it down for you.

This anthem about struggling to keep it together with your family and significant others over the holidays may be the most accurate Christmas song ever written ... unfortunately.

Spending Christmas with your most uptight relatives? Try swapping in this slice of jangle-pop mastery. See, Aunt Janice? Hipsters like Jesus, too! I told you these skinny jeans weren't the tool of Satan himself!

This sass-mouthed New Wave Christmas standard about missed connections is one of the only genuinely danceable Christmas songs around. Also, it absolutely slays at karaoke.

What is this song about? I have no idea. But it contains the line "Baby Jesus ... born to rock!" which should go on all of your Christmas cards this year.

Written in honor of his then-lady, Parker Posey, this minimalist Christmas song by the current Mr. Mandy Moore sweetly captures the melancholy vibe of spending the holidays by your lonesome. Whenever I listen to this, I like to pretend that Parker was away because she was making Josie and the Pussycats, but you're free to also imagine her off working on Scream 3 or You've Got Mail, if you prefer.

Grizzled, booze-soaked post-punk types love Santa too, okay? The Seattle-based band spend their one holiday tune speculating about the lonely life of St. Nick at the North Pole. It does seem like you'd probably get to drinking up there, right?

"Christmas Was Better in the '80s," the Futureheads

Was Christmas really better in the '80s? Or was it just better when it was about getting presents and eating cookies, instead of buying a bunch of gift cards and negotiating for the best airfare prices? I'll leave it to you to listen to this Brit-rock gem and let me know.

"That Was the Worst Christmas Ever," Sufjan Stevens

Stevens' breathy harmonies and fierce banjo picking are so entrancing on this song, you might miss all the stuff about the dad freaking out and throwing everyone's presents into the woodstove.

"Christmas at the Zoo," the Flaming Lips

Listen, I'm not endorsing that you spend your Christmas trying to convince orangutans to leave a zoo, but I'm not telling you to not do that either, okay? It's a free country and Santa will love you either way.