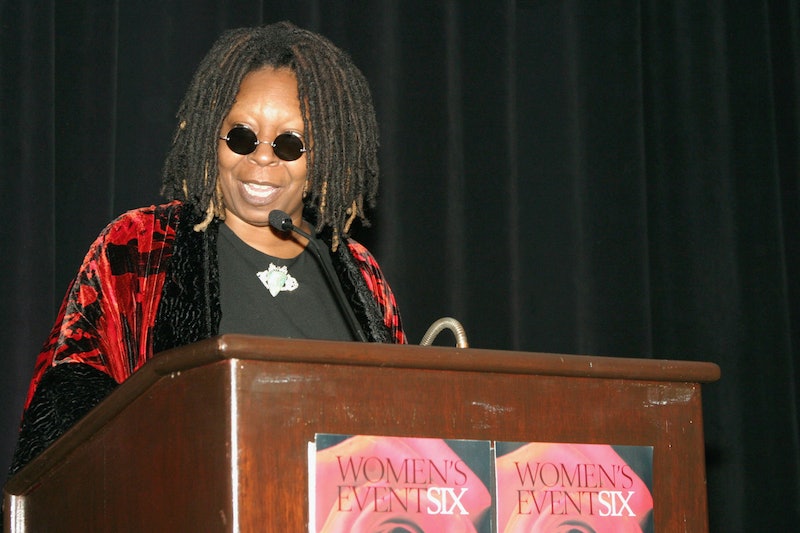 On Tuesday's episode of The View, hosts Rosie O'Donnell and Whoopi Goldberg had an uncomfortable, contentious discussion about the 'legitimacy' of the assault claims that many women have brought forward about Bill Cosby. In discussing the most recent case of Judy Huth, who says that Cosby took her to the Playboy Mansion when she was only 15, where he drugged her and raped her. Her story sounds strikingly like the stories of so many other women, least of all which include the five brave women that participated in a joint interview on Monday night, which the hosts of The View also discussed. Though Rosie O'Donnell lamented that these women had to suffer, and posited that she thought it was very likely that Cosby's victims probably number in the hundreds, Goldberg defended Cosby under the guise of "seeking the ultimate truth." And in my honest opinion, that's an offense enough for Goldberg to consider leaving the show.

O'Donnell, who herself has spoken in the past about her history of abuse, was incredulous, it seemed, and her voice cracked during the segment, as she talked about when you are the victim of abuse, you want to "take back your power. When you have been a victim, what you want is accountability for the person that did that to you." Even though they discussed merely the facts that so far, 26 women have come forward with allegations, many of whose statute of limitations have expired on, so they have nothing to gain from the accusations (monetarily, that is), Goldberg remained skeptical about their stories. It was a classic instance of bald-faced victim blaming, thinly veiled as a strong loyalty to 'the truth':

Please, I want as much info as I can get bc nobody wins here. You want to be sure before anybody says this is what it is and whatever it's going to take, go about it in the right way... Because we have so many instances where we get up and say "Get that son of a ---," and then we discover it's not the person.

Though it's easy to say, "Whoopi Goldberg is crazy and she doesn't know what she's talking about," she still has a platform wide enough that her dangerous statements could be extremely harmful. I don't think it's beyond a reasonable request for Goldberg to at least be petitioned to leave the show. If for nothing else but that by denying the experiences of Cosby's abusers, she's inadvertently minimizing the experiences of her co-host O'Donnell as well.

Why is there this seedy tendency for some women to side with abusers? Goldberg said outright that she supports Cosby. But O'Donnell asked her a very real and very uncomfortable question: "How many women would have to come forward for you to believe them?" Which Goldberg lamely dodged by going into another tirade about finding the truth.

What is the gain in trying to prove victims guilty? In a gross move, Goldberg also invoked the case of the false rape accusations brought against the players on the Duke University lacrosse team in 2006, as if that is a representative example. The myths about false rape claims are so tiring. Instead of supporting women and holding them up for their bravery, it tears them down.

The View, a show primarily women, does not need a Cosby apologist on its panel. What do you think the victims of sexual abuse that were in the audience were thinking when Goldberg came out in support of Cosby? She said of the accusations against him and the claims that he is a serial rapist, "Once somebody paints you with that brush, you are that forever." But what about the reputations of the women who have stayed silent for so long out of fear?

More like this
Everything To Know About 'RHONJ' Season 13
By Brad Witter and Jake Viswanath
Everything To Remember About Lace Morris Before 'Bachelor In Paradise' Season 8
By Grace Wehniainen
Bachelorette Gabby Kissed Her New Fiancé On 'Dancing With The Stars'
By Jake Viswanath
Where Is Former Bachelor Host Chris Harrison Now & What Is His Net Worth?
By Hugh McIntyre
Get Even More From Bustle — Sign Up For The Newsletter