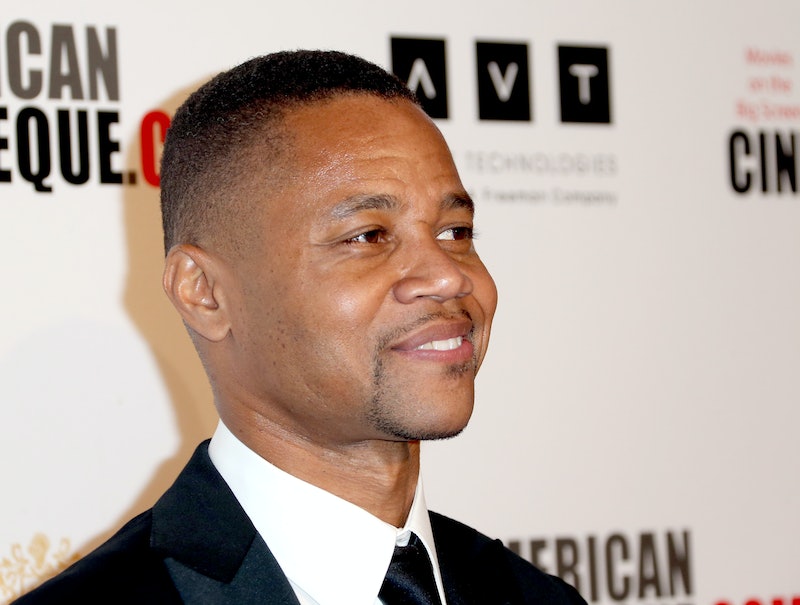 Cuba Gooding, Jr. is about to get sinister playing OJ Simpson in the debut season of Ryan Murphy's American Crime Story, a sort of spin-off but not really of American Horror Story. The anticipation for the new series might be coming at the perfect time, since Freak Show has been generally losing steam and definitely hasn't been able to meet the bar set for AHS by its preceding season, Coven. Also starring in this OJ business will be Sarah Paulson from AHS as the prosecutor in the case. Badass. I love true crime!

If you were born after 1995 (I literally cannot believe there are people out there in the world born after 1995), a very brief refresher: OJ Simpson, a former NFL player, was tried for the murder of his ex-wife Nicole Brown Simpson and waiter Ronald Lyle Goldman. It's been called "The Trial of the Century" as it was the most televised court proceeding of all time. It will be interesting to see if Murphy's new show uses real live footage from the trial or from any news coverage from the end of 1994 to the acquittal of Simpson in October 1995.

Sarah Paulson is to play a prosecutor in the case, Marcia Clark, a former Deputy District Attorney who was 40 at the time of the trial. Not sure how delicately Murphy is gonna handle the trial, because, as we all know, he's a fan of the "over the limit and out of control" style of television making. Maybe he will exercise in some restraint in American Crime Story. Which I will definitely be watching—I live for all things crime and cult and deep dark secret related (True Detective, Criminal Minds, obviously Law and Order) but it's certainly going to be strange to see a life re-enactment of a trial I was alive for. But the most important question is: Will Robert Kardashian, one of OJ's defense lawyers and father to Kim, Khloe and Kourtney be in the mini-series? And by extension.... will the young Kardashians?