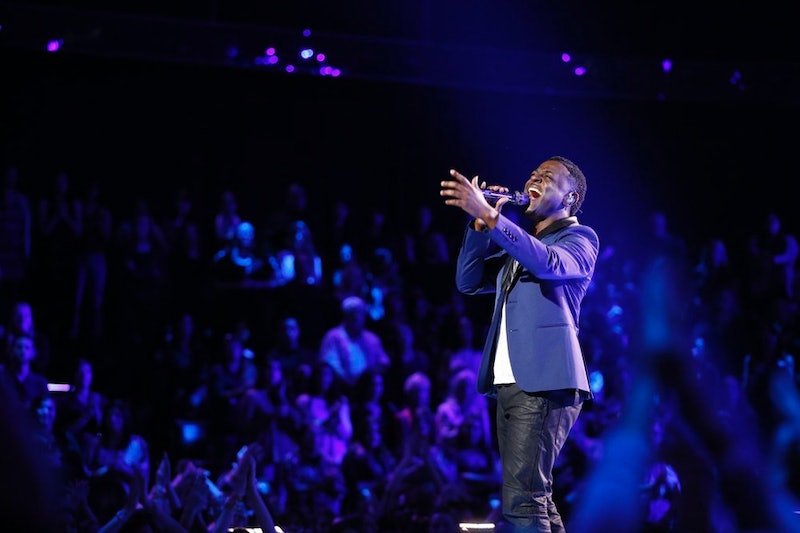 The world just ended. Well, at least The Voice world. We learned who the finalists are, and the list is shocking. Matt McAndrew from Team Adam and Craig Wayne Boyd from Team Blake rightfully earned their spots in Top 3, but the third will surprise you. Chris Jamison from Team Adam beat out Damien to make it into the finals, and all my faith in America's idea of talent came crashing to the floor.

Now, don't get me wrong, Jamison is extremely talented. He has the most amazing falsetto and has killer dance moves. There's no doubt that his charm is what won over the audience, rather than his talent. But his lack of experience gives him a disadvantage against the more seasoned performers. Damien — and even Taylor John Williams, whom Jamison also beat out — is one of those experienced artists, and America did a him a major injustice by sending him home.

Damien has been a favorite since his blind audition. He has a touching story about surviving the LAX shooting, and he has faced other challenges in his life that have led him to The Voice stage. These experiences have only made him stronger as an artist. Strong emotion is behind every song he sings and it takes his performance from technically perfect to incredibly inspiring. Though his voice is what got him on this stage, it is the feeling behind his performances that make him such a stand out contestant.

If America knows anything about true talent they'll save Damien in the Wildcard. They've seemed to love him in the past, and it could've only been a couple votes that kept him out of the finals. There's no question that Damien's performance will be the best of the 9 in the wildcard, so let's hope that this was just a minor setback and we'll see him in the finals.

More like this
Twitter Is Freaking Out Over Rihanna’s 2023 Super Bowl Halftime Show Announcement
By Stephanie Topacio Long
Jason Derulo Is Launching A New Singing Show In The UK
By Maxine Harrison
18 Years After 'American' Idol, Jennifer Hudson & Simon Cowell Reunited On Her Talk Show
By Radhika Menon
Pro Footballer Zander Murray Is "Blown Away" By Support After Coming Out
By Sam Ramsden
Get Even More From Bustle — Sign Up For The Newsletter