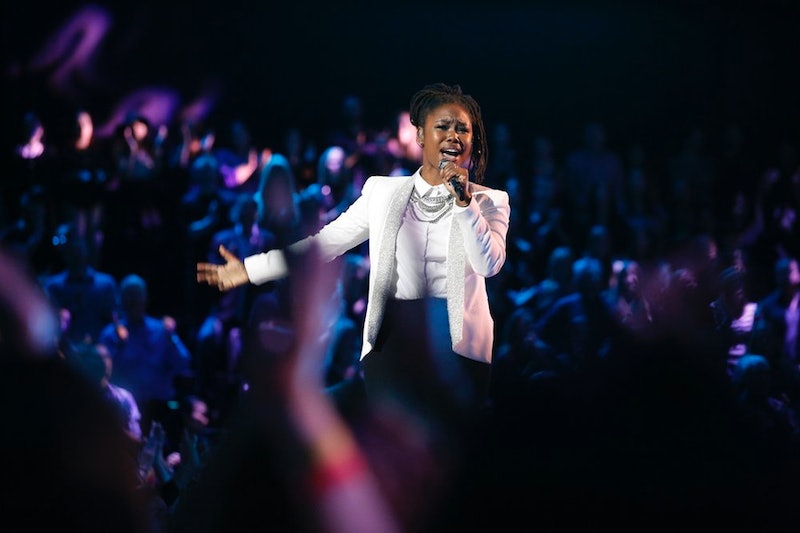 It's the first ever The Voice Wildcard, and things are happening fast. The 9 performers of the Top 12 that have been sent home are performing for one remaining spot in the finals, and they've all brought their A-game. One contestant that deserves to be back in this game is Anita Antoinette. She was one of my favorites from the beginning due to her quirky personality and unique style. Antoinette wowed in her Wildcard performance, but the most impressive part was that she used her chance at redemption to deliver an important message.

Antoinette chose to sing John Mayer's "Waiting On the World to Change" for her Wildcard performance. This was extremely selfless on her part, since she could've chosen a song that better showcased her voice. Instead, she chose a song with such strong, relevant lyrics to deliver an important message in the wake of the recent protests over the Michael Brown, Eric Garner, and countless other cases of police brutality that have sprung up recently. Though she may not have secured a spot in the finale, Antoinette used her time in the spotlight to try to inspire change, and that shows how inspiring of an artist — and a person — she really is.

The song made the performance great on it's own, but Antoinette backed it up with her sick scatting skills and cool reggae style. This girl is crazy talented, but she probably won't win the wildcard. Since her style is so niche and she has such a specific fan base, it's tough for her to get the votes she needs to move on. Regardless of that, though, Antoinette deserves a career in music. She's proved that she wants it and that she has the perseverance to get it (she came out for The Voice a second time after not turning any chairs in Season 6). Whether she makes an album or not, this girl has proved tonight that she would use her platform for good, and that's what being an artist is all about.

More like this
Jason Derulo Is Launching A New Singing Show In The UK
By Maxine Harrison
18 Years After 'American' Idol, Jennifer Hudson & Simon Cowell Reunited On Her Talk Show
By Radhika Menon
Everything To Know About 'RHONJ' Season 13
By Brad Witter and Jake Viswanath
Everything To Remember About Lace Morris Before 'Bachelor In Paradise' Season 8
By Grace Wehniainen
Get Even More From Bustle — Sign Up For The Newsletter