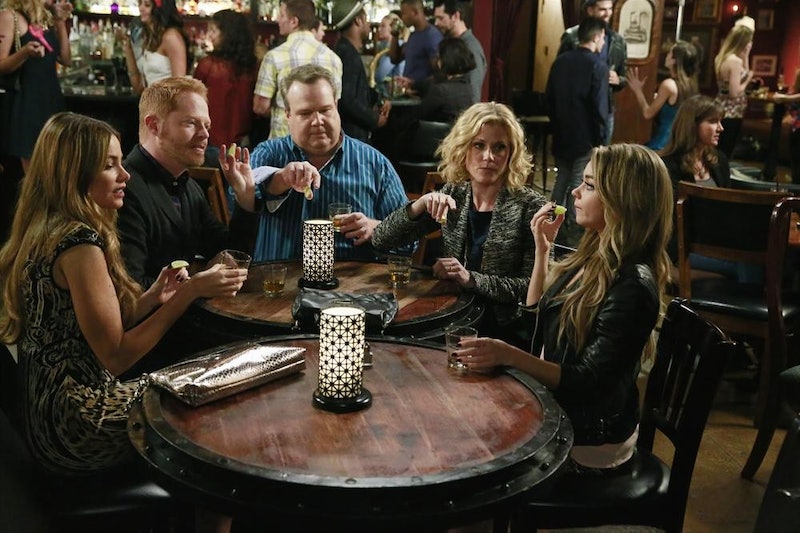 Whether you're spending your Winter Break from college at home or just trying to fit in a visit to every relative's house on Christmas, this time of year tends to be all about family time whether you like it or not. But if for whatever reason you need a break from your family, you can always find solace in the trials and tribulations of the Dunphy-Pritchett clan on Modern Family. Well, in reruns of this ABC comedy anyway. We've got one more new episode on Dec. 10 before this family goes on vacation. Unfortunately, if you were seeking one last bit of holiday cheer for the road, you're going to have to look elsewhere. The last new Modern Family of 2014 is titled "Haley's 21st Birthday," which involves the gang chugging some adult beverages for Haley's big 2-1, but not of the eggnog variety. There's no new Christmas episode of Modern Family this year, just a repeat of Season 5's "The Old Man & The Tree." So when will Modern Family return after taking a break following Haley's birthday celebration?

There's nothing to be upset about, because before you know it, Modern Family will be back from hiatus and better than ever. We'll have a few weeks of Modern Family repeats before we start off a shiny new year with a new episode on Jan. 7, 2015, according to The Futon Critic. That gives you plenty of time to finish up your holiday shopping, get your fill of your family, and not even give up on your resolutions yet. How beautiful is that?

As much as I love Modern Family and wholeheartedly believe it's the best comedy on TV today, even it has some room for improvement. Hey, we are coming up on the new year, after all. Here's what I'm hoping to see when Modern Family returns in 2015.

Haley Finally Gets with Andy

Come on, Modern Family. When are you finally going to make this couple offish? Haley obviously has a thing for Andy, even if he isn't a bad boy. And you mean to tell me Andy's girlfriend Beth is real and that she's still in love with him? Oh please. Andy's so into Haley, it's just sad to keep watching them get so close and then pulled a part again and again. Please put us out of our misery already.

Get Manny a Real Girlfriend

Speaking of love interests, it's clear Manny is a wonderful, mature little man who would treat a lady right. We've seen him actually date this season, but to no avail, like when that senior he had been dating went back to her ex-boyfriend. It gets a little frustrating after a while to see this Romeo try so hard and fail so miserably. Manny just wants to succeed so badly in the love department, and nothing would make me happier than to see him do that.

So far, Season 6 of Modern Family has been Pepper-less. You know, Cam and Mitchell's finnicky, over-the-top, yet still lovable friend played by the incomparable Nathan Lane? The last time we saw Pepper was when he was planning Cam and Mitchell's wedding at the end of Season 5. That was like 7 months ago, you guys. We could all use more Pepper in our lives, and I think the start of 2015 is the time to make it happen.

I love all of the characters on Modern Family and their many quirks, but I'm getting sick of watching Claire and Alex in their tired, one-dimensional, cliché storylines. We get that Claire and Alex are the responsible, uptight females of the Dunphy bunch, a trait that was thankfully explored in an episode earlier this season. However, we've been there, done that with Claire's "How does she do it all?" story and Alex's "nerdy equals undatable" plots. If Modern Family wants to continue to be the hilarious, award-winning sitcom that it is, it needs to grow, and this is as good a place to start as any.

Gloria gave birth to Joe during Season 4 of Modern Family, so isn't it about time this pipsqueak started gabbing? We're quickly approaching the two-year mark since the character first appeared on the show, which means the milestone of his first words has to be coming up soon. Hopefully. Judging by the fact that he is the son of Gloria and Jay, this kid is going to have a lot to say.