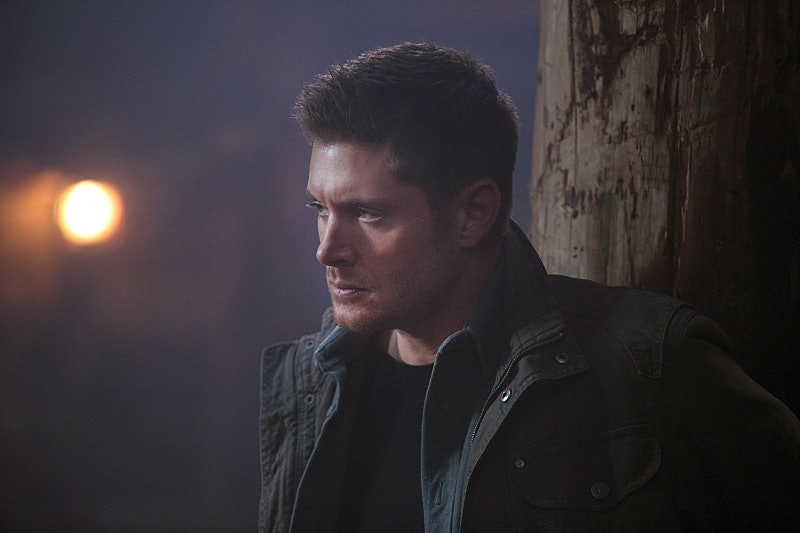 Well, it was bound to happen sooner or later. In Supernatural 's Season 10 midseason finale "The Things We Left Behind," which aired Tuesday night, Dean finally crossed back over to the dark and scary side of his personality, despite getting the demon removed from within him. What was the culprit that made Dean's violent side return? The Mark of Cain, of course. That damn lingering Mark of Cain. It only took Dean a few episodes to go completely postal on a few bad guys and scare the pants off of Sam and himself for that matter. And it looks like their fears were totally understandable when Dean's violent side lead him to kill at least three armed men by himself as Castiel and Sam tried to help Castiel's vessel's daughter, Claire, escape some horrible loan sharks that tried to attack her and take money from her makeshift family.

As we all know, there was no way that Dean was going to just return to his normal, pie-eating, beer drinking, amazingly heroic human self that he was before all of this demon, mark of Cain nonsense began, but it was a surprise to see that he went back to his bloody nature so quickly, considering we only saw a few glimpses of the dark side return. But Dean knew his violent side was just brewing underneath the surface waiting to attack, as he told Castiel to kill him if it resurfaced completely, no matter the objections that Sam was bound to make.

The midseason finale ended before anyone could make any official decisions about Dean's future, but it did give Sam the chance to try and convince himself and his brother that killing the men was his only option in that particular situation, even though the Winchesters hardly ever kill humans, especially in such a brutal way.

Supernatural will return on Jan. 20, 2015, and the promo for the new episodes show Dean still alive, of course. But it also shows Metatron taunting Team Free Will as he knows that Dean is getting very violent. It also shows the return of Charlie, and Dean punching her for some strange reason. So what the hell does all of this mean for Dean and for the rest of Team Free Will?

Clearly things are going in a downward spiral and of course it's the worst time for this to happen, as Crowley's mother Rowena is getting closer to him and planning something nefarious, Metatron is most likely planning an escape somehow, Castiel is dealing with his humanity with the resurfacing of his vessel's daughter, and of course there's the Cole of it all.

Tuesday night's midseason finale was called "The Things We Left Behind" for a reason: Castiel's search for his vessel Jimmy's daughter makes the title obvious, but there's another thing that makes it even more poignant. Maybe what Team Free Will should realize is that what is getting left behind is Dean's humanity. And getting it back is going to be a lot more difficult than taking away his demonhood.